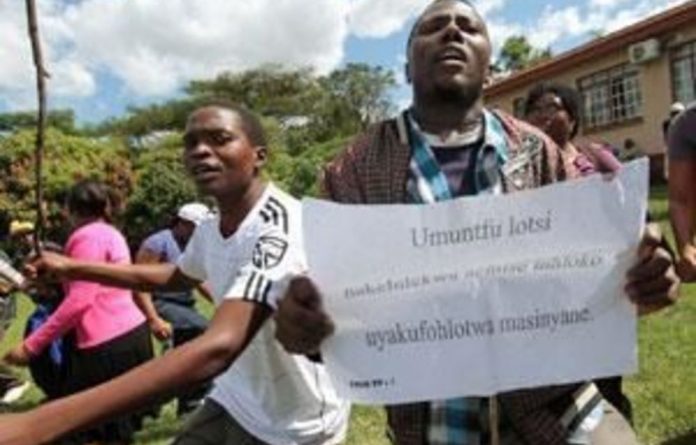 King Mswati III is clearly not one to miss a wedding: the autocratic ruler of Swaziland has 13 wives and holds an annual dance where he can choose a new bride from tens of thousands of bare-breasted virgins.

Next week, Mswati will be among VIP spectators at Westminster Abbey for a slightly more austere version hosted by the British royal family.

But his invitation has angered his countrymen, who accuse the UK of “legitimising” their autocratic monarch who rules over one of the poorest countries in the world.

When the king, who has a fortune of about $100-million, flies out he will leave behind a country in turmoil. Last week, his security forces launched a brutal crackdown against marchers seeking democratic reforms, and a possible Egyptian-style uprising.

Mary Pais Da Silva, coordinator of the Swaziland Democracy Campaign, condemned Mswati for making expensive travel plans while nearly 70% of his people live in absolute poverty. “If we had it our way, he wouldn’t go anywhere,” she said. “Right now, Swaziland is in an economic crisis. The government talks about belt-tightening but it doesn’t seem to apply to the king. It must apply across the board. “

Swazi activists in London are planning a picket on Tuesday night at the five-star Dorchester hotel in Mayfair, London, where Mswati is expected to stay with his entourage of 50.

Fungayi Mabhunu, coordinator of the Swaziland Vigil, asked where the money for the visit was coming from “because Swaziland is one of the poorest countries in the world. There is 80% unemployment and this is caused by Mswati. It is an absolute dictatorship. We want democracy in Swaziland; we don’t want monarchy any more.”

Mabhunu was disappointed that the UK was hosting Mswati. “We know there’s a certain protocol but do they want us to spoil the young couple’s wedding by protesting? They are being hypocritical. They know what is going on in Swaziland.”

The campaign group Action for Southern Africa, the successor organisation to the Anti-Apartheid Movement, joined the criticism. Its director, Tony Dykes, said: “It is astonishing that the Palace, presumably with advice from the British government, have invited the king of Swaziland to the royal wedding.

“They may claim they have done so due to some kind of protocol; if so, they are putting protocol before human rights. Whilst the king and his entourage party in luxury in London, the people of Swaziland are being pushed deeper into poverty and those who speak out face arrest and even torture.”

A spokesperson for Clarence House said: “The heads of state invited are members of royal families, in accordance with protocol for this kind of event.” – guardian.co.uk