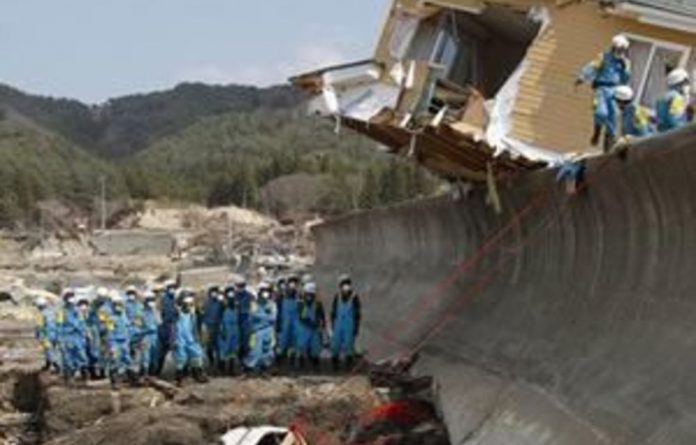 Soldiers prodded marshy ground with slender poles and cleared mounds of rubble by hand Monday as 25 000 troops mounted Japan’s largest search yet for the bodies of nearly 12 000 people missing in last month’s earthquake and tsunami.

The operation was the third intensive military search since the March 11 disaster, which splintered buildings, flattened towns and killed up to 26 000 people along Japan’s north-eastern coast. With waters receding, officials hope the team, which also includes police, coast guard and US troops, will make significant progress during the two-day operation.

In the town of Shichigahama-machi, a line of about two dozen Japanese soldiers walked in unison across soggy earth and muddy pools, plunging their poles about 60cm into the muck to ensure that they don’t miss any bodies buried below.

The search focused on a marsh drained in recent weeks by members of the army’s 22nd infantry regiment using special pump trucks.

Several dozen other soldiers cleared mountains of rubble by hand from a waterfront neighbourhood filled with gutted and teetering houses. Four people in the neighboorhood were missing, said 67-year-old Sannojo Watanabe.

“That was my house right there,” he said, pointing to a foundation with nothing atop it.

He surveyed the neighboorhood: “There’s nothing left here.”

In all, 370 troops from the regiment were searching for a dozen people still missing from Shichigahama-machi. The regiment had been searching the area with a far smaller contingent, but tripled the number of troops it was using for the two-day intense search, said Colonel Akira Kun itomo, the regimental commander.

The search is far more difficult than that for earthquake victims, who would mostly be buried in the rubble, said Michihiro Ose, a spokesperson for the regiment. The tsunami could have left the victims anywhere, or even pulled them out to sea.

Two weeks on from the earthquake and tsunami, Japan now faces massive reconstruction. View our slideshow of the unfolding tragedy.

“We just don’t know where the bodies are,” he said.

Bodies found so many weeks after the disaster are likely to be unrecognisable, black and swollen, Ose said.

“We wouldn’t even know if they would be male or female,” he said.

More than 14 300 dead
A total of 24 800 soldiers — backed by 90 helicopters and planes — were sent to comb through the rubble for buried remains, while 50 boats and 100 navy divers searched the waters up to 20km off the coast to find those swept out to sea.

“It’s been more than a month since the massive earthquake and tsunami, but we still have lots of people still missing,” Defence Ministry spokesperson Norikazu Muratani said. “We want to recover them and return them to their families.”

More than 14 300 people have been confirmed dead and nearly 11 900 remain missing. The military’s first intense sweep for bodies uncovered 339, while its second turned up 99 more, Muratani said. Numbers for Monday’s search were not immediately available.

After the 2004 Indian Ocean tsunami, bodies turned up along the Indonesian coast for several months afterward as people cleared debris in reconstruction efforts. However, 37 000 of the 164 000 people who died in Indonesia simply disappeared, their bodies presumably washed out to sea.

The robots found cars, homes and other wreckage in the sea, but no bodies, said Mika Murata, an official with the institute.

The Japanese government has come under criticism for its response to the quake, tsunami and subsequent nuclear disaster, with some members of the country’s opposition urging Prime Minister Naoto Kan to resign.

Members of Kan’s ruling party won only three of 10 elections held over the weekend, mostly for local government posts.

On Monday, Kan stressed to a sometimes hostile Parliament that his government was doing everything it could to gain control of the radiation leaks at the Fukushima Dai-ichi nuclear plant, which has prompted the government to evacuate residents from a 20km area around the crippled reactors.

“The nuclear accident is still ongoing,” he said. “The top priority right now is to stabilise it.” – Sapa-AP