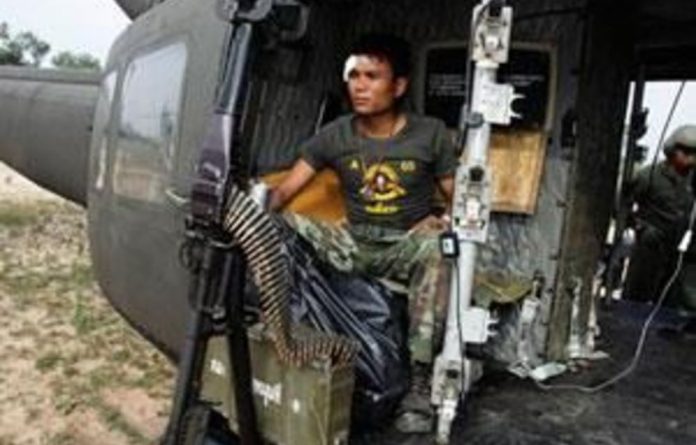 Thai and Cambodian military commanders met for ceasefire talks on Thursday, but a deal to end the bloodiest fighting in decades remained unconfirmed.

“They agreed to a ceasefire and for soldiers to stay where they are,” Tea Banh told Agence France-Presse by telephone.

Thai military spokesperson Sunsern Kaewkumnerd said that while talks had taken place “no agreement has been reached”.

“Fighting has stopped now on both sides,” he added.

Both countries continue to blame each other for sparking the violence around two contested jungle temples, which has forced tens of thousands of civilians on both sides to flee their homes.

One Thai soldier died on Thursday morning, bringing the total number of the country’s troops killed since the fighting began last Friday to six, while eight have died on the Cambodian side.

Bangkok has said a Thai civilian has also been killed.

The fighting has prompted increasing diplomatic pressure on the neighbours to end hostilities.

A statement from European Union foreign policy chief Catherine Ashton on Wednesday called the conflict “very worrying” and echoed calls made by the United Nations Security Council in February for a permanent ceasefire.

The US ambassador to Thailand, Kristie Kenney, on Thursday also urged a return to the negotiating table and said she hoped the Association of South-east Asian Nations (Asean) regional bloc would help discussions.

Talks
Talks aimed at ending the violence had been due to take place in Phnom Penh on Wednesday, but were called off by Thailand’s defence minister at the last minute.

The Thai-Cambodian border has never been fully demarcated, partly because it is littered with landmines left over from years of war in Cambodia.

On Tuesday the fighting briefly spread to the 900-year-old Preah Vihear temple, which has been the focus of strained relations between the neighbours since it was granted UN World Heritage status in 2008.

In February, 10 people were killed near the Preah Vihear temple, which is 150km east of the two other ancient temple complexes at the centre of the current clashes, prompting a UN appeal for a permanent ceasefire.

The neighbours agreed in late February to allow observers from Indonesia into the area near Preah Vihear. But the Thai military has since said the monitors are not welcome and they have not been deployed.

The World Court ruled in 1962 that the temple belonged to Cambodia, but both countries claim ownership of a 4,6 square kilometre surrounding area.

Cambodia has accused Thailand of using spy planes and poisonous gas in the recent fighting — an allegation denied by Bangkok. — AFP