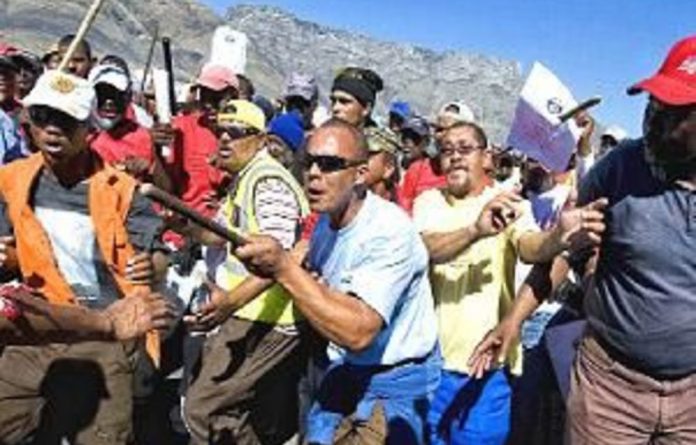 The ANC’s local government election campaign is under attack from an unexpected quarter: threats of a strike by its municipal trade union ally days before election day. The threats are peppered with hostile rhetoric against the ruling party.

Battle lines have been drawn between Cosatu’s powerful municipal union, Samwu, and the ANC, after the trade union announced its plans to embark on massive strike action on May 10. Samwu leaders have insisted the strike action is intended merely to advance workers’ interests. But ANC leaders have accused Samwu, the largest municipal union, of deliberately trying to sabotage its election campaign.

The dispute is likely to deepen long-standing tension between Samwu and the ANC. Since the early 1990s the two organisations have been on a collision course because of their differences over issues such as local government restructuring and the privatisation of key state assets.

The union’s strike announcement came only days after it suspended a three-week strike by union members employed by Pikitup, Johannesburg’s waste management company, which left the city littered with uncollected refuse. Speaking to the Mail & Guardian this week ANC treasurer general Mathews Phosa took a swipe at Samwu leaders.

“This [the planned action] is in poor taste and it contradicts the spirit of what was agreed upon in the alliance [meeting] to support the ANC manifesto,” he said.

Disruption of services
Phosa said although the ANC respected the union’s constitutional right to voice its opinion in public discourse, it did not approve of the opportunistic way in which Samwu members disrupted local public services.

That did not serve the democratic cause, he said. “They should engage on issues without crossing the line. We are not saying people should not express their anger, but to make cities smelly during election time can’t be condoned.

President Jacob Zuma has also questioned the timing of the planned action. “Cosatu has made a commitment to support the ANC during the local government elections,” he said at a press conference in Johannesburg on Thursday.

“We [the ANC and Cosatu] are campaigning together. The timing [of Samwu’s strike] has to be looked at. That’s all we are saying,” Zuma said.

The union was not surprised by the attacks from the ANC, Nhlapo said. “This has been happening for a long time. In 2009 when we embarked on strike action people said we were sabotaging the ANC’s campaign for the national elections.

“Last year we were accused of trying to sabotage the World Cup, when we raised genuine worker issues. Now we are being accused of sabotaging the ANC’s campaign for the local government elections.”

But workers’ interests should not take a back seat whenever there are major national events, Nhlapo said. “Elections or not, workers’ struggles remain.” He dismissed claims that Samwu was trying to sabotage the ANC’s election campaign. “We told them [the ANC] there was no intention from our part to sabotage their campaign. We asked them to intervene in our dispute with municipalities in March.

“That meeting has not taken place. Should the ANC intervene, we are prepared to avert the strike,” Nhlapo said.

“Systematically, our leadership is being targeted. In Limpopo, when our members exposed corruption in government, they became victims,” Nhlapo said.

The protest action planned for May 10 had several causes, Nhlapo said. These include:

The union also wants Minister of Cooperative Governance and Traditional Affairs Sicelo Shiceka dismissed if corruption allegations against him are found to be true.