Age shall not wither them 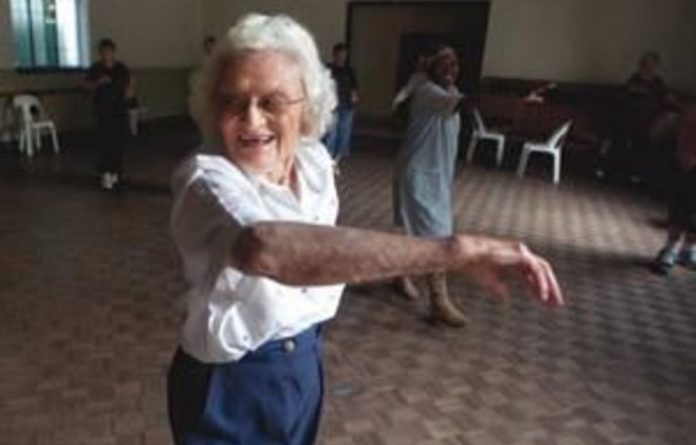 ‘I am on a high when I’m in class. I’m having fun! And it gives me a sense of pride, of walking tall — I walk better because my core is stronger.”

Retired doctor Sylvia Kree is living proof of three things — you can get stronger in your golden years, even well after 70; it’s never too late to get fit and healthy; and exercise, at whatever age, has a profound impact on every part of your life.

The 85-year-old Kree retired 17 years ago after a 45-year career. As a younger woman, she says, she was a serious, responsible person; now, at an advanced age, she has developed a “bubbling enthusiasm” and is enjoying life. She puts much of this down to one simple thing: her thrice-weekly exercise classes for older people held by Johannesburg physiotherapist Solange Czerniewicz.

When she was diagnosed as osteoporotic (compromised bone density) a decade ago, Sylvia took action. As a medical professional she knew walking would be helpful and so she started to do Walk for Life. She also knew that resistance training of some kind would be good. A friend told her of Czerniewicz’s classes, which are a mix of cardiovascular and resistance work with lots of core-muscle strengthening, and she started to attend.

Ten years on, she is the picture of health, with a lovely pink colour in her clear skin and the ease with which she walks and moves is in stark contrast to many people who are much younger than her. Her strength has also improved, which is unexpected in a woman who says she never did any sport in her life.

This is what research fellow Dr Mark Peterson at the University of Michigan Physical Activity and Exercise Intervention Research Laboratory found in a study in which his team analysed current research on exercise’s impact on people over 50.

The clear result: a judicious use of progressive resistance training (for example, using either weights or therapeutic bands to work against) can actually increase strength capacity in later life. Age does not have to mean diminishing strength.

Muscle tissue
Normally people who are and remain sedentary over the age of 50 can expect to lose about 0,18kg of muscle mass every year. It sounds like a small amount, but it soon adds up. And the older you are the less anabolic hormones, which are essential to increasing muscle tissue, you produce.

You might not notice it at 51 but by the time you’re 75 the steady reduction in muscle tissue and strength could mean you are unable to lift yourself comfortably out of your chair or climb stairs with ease — and that means a reduction in quality of life.

But what about all those muscles you built up in the gym in your 20s and the squash court in your 30s? Don’t pat yourself on the back if you were a sports person before 50. Let the habit die and you lose the benefits remarkably fast once you’ve become inactive. Let a few years go by and you could be in the same boat as someone who’s never exercised.

Peterson says throughout life you should never be inactive for long periods: “Gradual deterioration may begin to take place within a couple of weeks of inactivity.” The impact is exaggerated in older adults, he says, “thus giving the impression that ageing equals deterioration. It may well be that many so-called age-related health outcomes are a direct result of disuse and not chronological ageing per se.” Use it or lose it, in effect.

But age should not and need not equal the kind of massive deterioration many of us associate with it, having seen the experience of grandparents and other older relatives. Although it might not be possible to pump up muscles as you could when you were young, you can improve strength, using the right mix of exercises and doing progressive training.

Body mass
Progressive training means that the amount of weight (or resistance) used is increased over time, with the frequency and duration of the sessions. You can use your own body mass as a weight to get started, says Peterson, especially for those who start off from a long-term sedentary base. For these people, “one’s own body mass may well represent a heavy load, regardless of whether weight gain occurs”, he says.

Overweight compounds the problem but it also gives you something to work with: “Using one’s own body mass in a full range of motion exercises … is a fantastic way to get started.”

In class, for example, Kree and her classmates use garden chairs as props, sitting and standing in time to music, moving their own body weight as a way of increasing strength. They also perform a range of arm movements while holding small dumbbells, and some wear ankle weights as they march and sway and even dance to the catchy music that is a key part of the class. As Kree has discovered, age is no bar to improvement.

“The prospective ability to gain strength is not attenuated by advanced age,” says Peterson. “This is backed up in the literature, with ample evidence showing that even among the oldest old, that is more than 80 years, significant strength adaptation is possible.” So you’re never too old to get fit.

The impact on Kree has been profound. “The mobility that I can see and feel has had a ripple effect throughout my life.” She is physically energetic and capable. Czerniewicz, who has become friendly with the 85-year-old, invites Kree to her parties and “she’s always the first on the dance floor”, Czerniewicz says. “She’s got a joie de vivre I’ve not seen in many younger people.”

But it is also likely to have had an impact on other areas of life. A very mature student, Kree has been studying for years, racking up credits in psychology and Jewish studies — once again, she is a living demonstration of many studies that have shown that exercise is vital to a healthy top-form brain.

Recent research conducted at the Texas Health Presbyterian Hospital’s Institute for Exercise and Environmental Medicine in Dallas has offered a possible explanation for this link: “In a three-month study of 16 women age 60 and older, brisk walking for 30 to 50 minutes three or four times a week improved blood flow through to the brain by as much as 15%” (Science Daily, April 12 2011). Blood flowing into the brain feeds it with the oxygen, glucose and other nutrients it needs; blood flowing out washes away metabolic wastes, some of which have been implicated in the development of Alzheimer’s disease.

Kree’s academic achievements and her intelligent conversation show the effect of her exercise classes. “The last six or so years have been the biggest growth and development period of my life,” she says.

Seeing the improvements in her and others in class is deeply rewarding for Czerniewicz: “This work is the most exciting thing I’ve ever done in my life” — because the results are so big and tangible.

“Now my dream is to find a way to take exercise to disadvantaged older people. I’d love to see mass classes in Soweto, giving strength and resilience to the people who are carrying the burden of parenting the ‘skip generation’.”