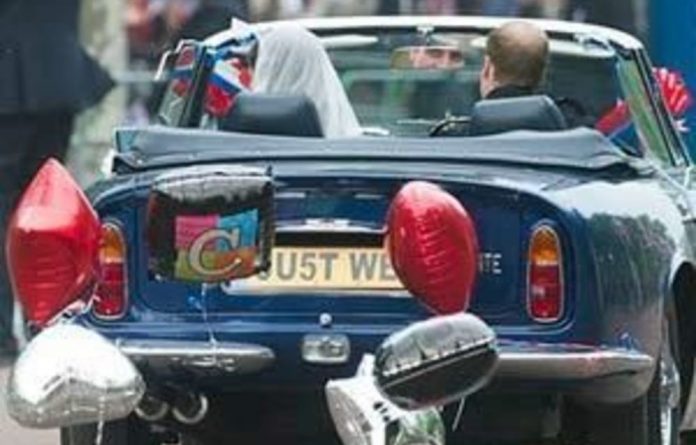 Prince William and his new wife flew out of Buckingham Palace on Saturday after tying the knot in a dazzling display blending centuries-old royal tradition with the private moments of any young couple.

Following a late-night party for friends and family, the couple were expected to enjoy a honeymoon although their destination is unknown. A royal spokesperson said they left the palace by helicopter on Saturday morning.

The prince and Kate Middleton, his 29-year-old girlfriend of nearly a decade, married in London’s Westminster Abbey on Friday in a ceremony that captivated the world.

A million cheering people tried to catch a glimpse of the newlyweds as they rode from the abbey to Queen Elizabeth’s Buckingham Palace in an open-topped carriage. One newspaper estimated the worldwide television audience at three billion.

Commentators praised the royal family for striking a balance between choreographed pomp and ceremony — military bands in black bearskin hats and household cavalrymen in shining breastplates — and personal spontaneity.

“The British still know how to combine pageantry, solemnity, romance [and wild hats] better than anyone else in the world,” wrote Sarah Lyall in the International Herald Tribune newspaper.

William (28) drove his bride the short journey from Buckingham Palace to St James’s Palace in his father’s open-top Aston Martin with the licence plate “JU5T WED”. Their kisses on the palace’s balcony carpeted newspaper front pages on Saturday.

“It marks a sea change for our country,” wrote Geordie Greig in London’s Evening Standard newspaper. The union of William and Middleton was “a much-needed injection of refreshment for the royal family”.

Left-leaning commentators were less gushing but the overall tone was still overwhelmingly positive.

“There’s Kate in the car, beginning her waving career with a tentative, strangely angled motion,” wrote Zoe Williams of the Guardian. A headline in the Independent read: “Across the nation they rallied to the occasion — even some republicans joined in”

British media were also awash with pictures of Middleton’s sister and maid of honour Pippa in a slinky dress. “Is Pippa the most eligible woman in the world?” asked the Daily Telegraph.

Honeymoon a mystery
Like other details of the wedding, including the designer of Middleton’s dress, the honeymoon venue is a secret.

Suggestions have included the Seychelles, Kenya, Mustique, an island on Australia’s Great Barrier Reef, the Greek island of Corfu and the Scilly Isles off England’s south-west coast.

Bookmaker Paddy Power has Mustique as the favourite followed by Jordan, the Seychelles and Australia.

The intense speculation over the couple’s every move underlines the pressure they will face as the future British king and queen living in the full glare of the media spotlight.

Uncomfortable parallels have been drawn between Middleton and William’s hugely popular mother Princess Diana, who was hounded by paparazzi right up to her death in a Paris car crash in 1997 aged just 36.

Her death, and divorce from heir to the throne Prince Charles the year before, marked a low point for the royal family, which has also been embroiled in scandal and is seen by many as being out of touch with the British public, particularly during austere economic times.

But Middleton’s background — she is the first commoner to marry a prince close to the British throne in over 350 years — and William’s personable style have helped reverse the monarchy’s rating in recent opinion polls, at least for now.

Not that the wedding was universally acclaimed.

“The royal family have too many rights in a country where other people are having their state rights withdrawn. We are funding a wedding of two people I’ve never met and I don’t care about at all,” said London charity worker Jessamy Barker (29).

Middleton has been given the title Her Royal Highness, The Duchess of Cambridge, after the queen made her grandson William the Duke of Cambridge to mark the marriage. – Reuters