US tornado losses seen in billions 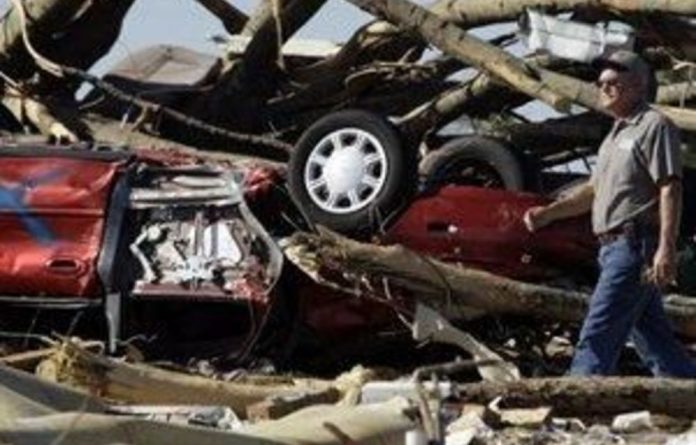 President Barack Obama promised federal aid on Friday to the tornado-ravaged US South, where deadly twisters have killed at least 339 people and caused billions of dollars in damage.

Obama toured smashed homes and met survivors on a visit to the worst-hit state, Alabama. It was one of seven southern US states mauled by recent tornadoes and storms which have caused insured losses of between $2-billion and $5-billion, according to one catastrophe risk modeler’s estimate.

“We are going to do everything we can to help these communities rebuild,” Obama told reporters in Tuscaloosa, a university city in Alabama that was devastated by the tornadoes.

The destruction inflicted this week by the twisters, which flattened whole neighborhoods, was the deadliest US natural catastrophe since Hurricane Katrina in 2005.

“I have never seen devastation like this. It is heartbreaking,” said Obama, accompanied by his wife Michelle and Alabama Governor Robert Bentley. “This is something I don’t think anyone has seen before.”

In Alabama, emergency officials again raised the death toll from the tornadoes in that state, to 238. Bentley said 1 700 people were injured.

Children were among the victims.

Fema administrator Craig Fugate said it was feared the number of deaths would rise as states searched for many people unaccounted for. But the number of missing was not clear.

“We can’t bring those who’ve been lost back. They’re alongside God at this point … but the property damage, which is obviously extensive, that’s something we can do something about,” Obama said.

“Tornado activity in April is putting 2011 into the record books,” it said, adding that the recent tornado outbreak had involved “hundreds of touchdowns, some tornado tracks reported to be almost a mile [1,6km] wide and tens of miles long causing hundreds of fatalities”.

Obama was eager to show that federal relief is on its way and that he is not taking the disaster lightly. His predecessor George Bush was fiercely criticised for what was viewed as a slow response to Hurricane Katrina.

Flying into Tuscaloosa aboard Air Force One, Obama and his family saw a wide brown scar of devastation several kilometres long and hundreds of metres wide.

Tuscaloosa resident Jack Fagan (23) was glad that Obama saw the damage. “Perhaps federal funds will help us, but I’m sure it will take longer than they say because it always does.”

Recovery could cost billions of dollars and even with federal disaster aid it could complicate efforts by affected states to bounce back from recession.

Tornadoes are a regular feature of life in the US South and Midwest, but they are rarely so devastating.

Nuclear plant shut
The tornadoes hit Alabama’s poultry industry — the state is the number three US chicken producer — and hurt other manufacturers in the state.

They also halted coal production at the Cliffs Natural Resources mine in Alabama.

The second-biggest US nuclear power plant, the Browns Ferry facility in Alabama, may be down for weeks after its power was knocked out and the plant automatically shut, avoiding a nuclear disaster, officials said.

Apparel producer VF Corp, owner of clothing brands such as North Face and Wrangler Jeans, said one of its jeanswear distribution centres, located in Hackleburg, Alabama, was destroyed and one employee killed.

In Tuscaloosa, the twisters, including one 1,6km wide, cut a path of destruction, reducing houses to rubble, flipping cars and knocking out utilities. The death count was expected to rise with many bodies still trapped under debris.

“We are bringing in the cadaver dogs today,” said Heather McCollum, assistant to Tuscaloosa’s mayor. She put the death toll in the city at 42 but said it could rise.

Of the more than 150 tornadoes that rampaged from west to east across the South this week, the National Weather Service confirmed that one that struck Smithville in Mississippi’s Monroe County on Wednesday was a rare EF-5 tornado, with winds reaching 328km per hour.

This is the highest rating on the Enhanced Fujita scale that measures tornado intensity.

“The homes here are made well … but when you are talking about a direct hit, it does not matter,” Monroe County Sheriff Andy Hood said. “Right now, those homes are slabs of concrete. There is nothing left.”

Across the South, many people were made homeless by the tornadoes and stayed in shelters. Some residents provided food, water and supplies to neighbors whose homes were destroyed.

Tuscaloosa resident Antonio Donald (50) received help. “I got no light, no water. I have a newborn baby at home, a daughter who is pregnant and an 88-year-old aunt,” he said.

The storms left up to one million homes in Alabama without power. Water and rubbish collection services were also disrupted in some areas.

Alabama’s Jefferson County, which is fighting to avoid what would be the largest municipal bankruptcy in US history, suffered damage and 19 dead but said the storms would have little direct impact on its struggling finances because federal grants were expected. – Reuters