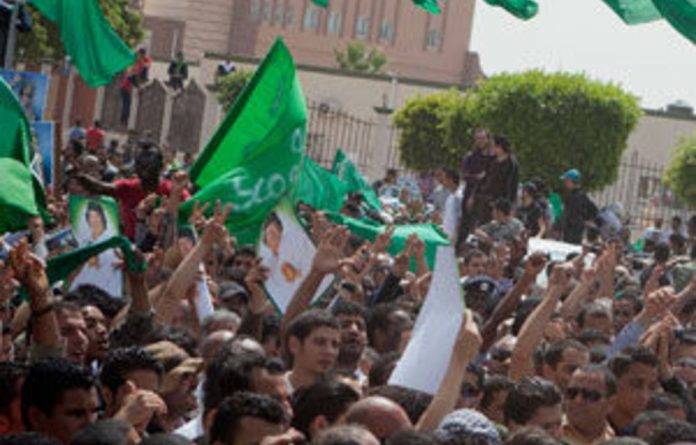 The besieged Libyan rebel city of Misrata braced for a new bombardment by Muammar Gaddafi’s forces on Tuesday as an ultimatum for its surrender expired a day after shelling killed 14 people.

Loyalist tanks thrust into the western suburbs of the oil-rich North African nation’s third city from their base at the airport on Monday as Gaddafi’s family mourned a son and three grandchildren killed in a Nato-led air strike.

About 30 people were wounded, some critically, putting new pressure on already stretched hospital facilities, medics said, as fearful residents bemoaned the absence of a more forceful use of the Western alliance’s air power.

Two of Gaddafi’s tanks were destroyed in Monday’s fighting — one in a Nato air raid and the other by the rebels, commanders said.

Government spokesperson Mussa Ibrahim announced the ultimatum for rebel fighters in Misrata to cease fire late on Friday, offering them an amnesty if they laid down their weapons.

The rebels, who have been under siege by loyalist forces for two months, promptly rejected it.

“We will not surrender. We win or we die,” said the rebels’ top commander, Ibrahim Bet-Almal, who lost his son in fighting with the loyalist forces on April 9.

Renewed bombardment
With the airport in government hands, the rebels are entirely dependent on supply by sea, and the city’s port came under renewed bombardment on Monday after Gaddafi threatened to shell any vessel attempting to dock.

About a dozen rockets struck the harbour district during the morning, witnesses said, and Agence France-Presse correspondents heard more loud explosions in the evening.

With the market gardens of the suburbs under loyalist control or a battleground, fruit and vegetables are becoming increasingly scare in the city’s markets, as is meat.

Flour, too, is beginning to run low, and residents were queuing for two hours or more outside bakeries.

Would-be customers put on a brave face about the looming expiry of the regime’s ultimatum.

“I’m not worried. Gaddafi won’t do anything,” said Abd al-Bari, a 20-year-old student. “He’s lying as usual. God willing, he will do nothing.”

But al-Bari expressed serious concern about the tightening noose around the city’s seaport.

“If it’s blocked off, the boats that have been providing us with aid won’t come any more and then we will have really big problems,” he said.

Ibrahim Ali (48) was desperately trying to find a berth on a boat out for his family to their home town of Benghazi, the rebels’ eastern stronghold.

When he tried to do so on Monday, the port had come under heavy shelling by Gaddafi’s forces.

“The other day, Gaddafi said that any boat docking in the port would be attacked. He was true to his word. It’s pretty alarming,” Ali confided.

“You have everything to fear from a madman like Gaddafi. All he has here are his multiple launchers that fire Grad rockets from 20km to 30km away. I think he is going to do that today, pound us again, perhaps even more.”

The threat to Misrata’s maritime lifeline comes not only from Gaddafi’s rockets.

Nato forces were searching for a stray anti-ship mine laid by his forces last week, the alliance said. Four small boats were caught dropping three mines off the port, but only two were found and disarmed.

‘Overwhelmed’
Doctors at the city’s main hospital, some of them Western volunteers, said they were struggling to cope with the mounting casualty toll.

“The intensive-care units are just overwhelmed,” one volunteer said.

“A patient died in one today [Monday]. We have got just seven beds for nine patients and two are having to receive artificial respiration manually.

“The nurses are having to do it in relays — we just don’t have the equipment.”

In Tripoli, more than 1 000 people attended the funerals on Monday of Gaddafi’s second youngest son and three of the leader’s grandchildren.

Ibrahim told reporters that Seif al-Arab Gaddafi was killed in a Nato-led air strike on a Tripoli compound over the weekend. The grandchildren who died were a boy and a girl, both aged two, and a baby girl of four months.

Some mourners fired guns in the air and chanted pro-Gaddafi slogans. “Revenge for martyrs! People want Muammar, the guide!” — AFP

Time is running out to stop Isis creating a Libyan stronghold that would threaten the security of Europe and neighbouring African states.
Read more
Advertising
Continue to the category
National