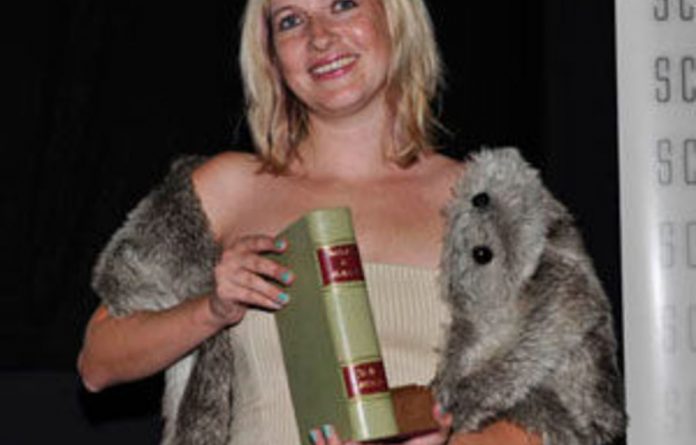 Author Lauren Beukes recently won the prestigious Arthur C Clarke Award for her novel Zoo City. She is the first South African winner of the award, which honours the best work of science fiction literature published in the United Kingdom.

Please tell me a bit about the award, and what it means to you. “Nominated for/winner of the Arthur C Clarke Award” is one of those phrases that was splashed across books I read growing up. Do you have a similar “relationship” with the award? Was it an aspiration?
I grew up with those too! And books boasting “Hugo” and “Nebula” award-winning. It did seem like something pretty special that I dreamed about as a kid (together with getting Dragonlance artist Larry Elmore to do my first book cover!)

More recently I think I’ve been too absorbed about the business of being a writer to think about it and when the nomination came in, it seemed unreal and maybe enough in itself, to be on THAT short-list.

Winning was a huge shock. I think that’s apparent in the YouTube video. I’m still coming down, still trying to compute it. It’s overwhelming and humbling to get that kind of international recognition. Being ranked among some of my favourite writers including Margaret Atwood and China Miéville and Kazuo Ishiguro and Geoff Ryman — writers I grew up reading, writers I read now? Mad. Wonderful.

I’m happy and delirious and, most of all, grateful — it’s like a physical pang.

Many will look at the list of books nominated over the years and be slightly confused about the science fiction label. It clearly is a broad definition of the genre. What are your thoughts on this and where does your book fit in?
Science fiction is a misnomer generally. It’s a broad church and only one small part of it is particularly focused on hard science. It’s about alternate worlds whether that’s on another planet or a different take on this one. At its best, it’s a lens for exploring where we are right now and who we are right now from a different, fantastical perspective. There’s a lot of “literary” literature that qualifies as science fiction from Haruki Murakami to Michael Chabon to David Mitchell and TC Boyle.

Tell me a bit about the other nominated books. Have you read all of them? Did you have a clear idea what you were up against? How did you fancy your chances?
I’ve read Generosity, which I loved, and The Dervish House, which made me un-fancy my chances very much. Although there was talk that Ian McDonald and I were the front-runners, I was hoping, at best, for an honourable mention and maybe getting a T-shirt printed “I lost to Ian McDonald and I liked it” — which is exactly what happened at the BSFA Awards. If you’re gonna lose, lose to Ian McDonald.

The only thing I was really counting on (and would have been crushed if it hadn’t happened) was claiming the BSFA award for best cover design for Zoo City on behalf of Joey Hi-Fi, who is not only a brilliant designer but also so humble and nice that he really deserved it. I was really hungry for that and I was so thrilled when he won.

The Twitterverse exploded when you won. How were you feeling? Were you at all surprised by the reaction of people back home?
It brought home what a Very Big Deal this is. It was amazing, although I had a major tech fail in London and then had to fly home that night, so I wasn’t able to personally respond to a lot of it. Huge thanks to everyone who tweeted or emailed or commented on Facebook.

How did the UK press respond to your win? Did anyone seem surprised by the kind of literature that South Africa is producing?
There were articles in the Guardian and others (as I mentioned, I flew out the next day so I’ve missed a bit) but I did get to be interviewed by the British Library the next morning as part of their Science Fiction display running from May to September (very, very hungover, unfortunately). But there didn’t seem to be any surprise that this would be a South African book. I suspect District 9 blew open perceptions of what South African story-telling could be.

Tell me a bit about being a SA author published in the UK. How “open” is the literature market? How does one compete?
I can only talk from my own experience (everyone suddenly expects me to be an expert on all of SA literature, all of science fiction, women in science fiction, women in South African science fiction etc — and it’s a little intimidating). It depends on so many factors. I believe South African crime and thrillers are doing very well in the UK, and Europe especially.

A South African, Andrew Saloman is up for the inaugural Terry Pratchett prize for an unpublished novel and The Mall by SL Grey (a hive-mind collaboration between Sarah Lotz and Louis Greenberg) hits the UK in June. There’s some pretty exciting stuff happening and I think partly what readers find exciting is the exotic location of South Africa that is so different to what they’re used to and it is this strange and wonderful mash-up of culture and history and technology and development and modernism.

I think you compete the same way you do in any market, put out the best (or most commercial) book you can and try to make sure it reaches the right audience. It’s something my UK/US publisher Angry Robot does very well.

In SA, SA authors are given a special “section” at most bookshops. What do you think of this practice? Should it matter where the writer is from?
I think it’s a tactic aimed at the tourist market and it’s more appropriate for curio shops. The most ridiculous example was Sarah Lotz’s Pompidou Posse, a book by a British writer with SA residency about her time living homeless on the streets of Paris. And it’s in “African Literature”? It’s just confusing and absurd. We need to be rid of bookstore apartheid!

The award must give your work a boost, in terms of promotion and media coverage. How does one capitalise on that, and maintain that momentum?
I’ll let you know? There has definitely been more interest and my publisher is reporting sales spikes, although I don’t know how long that will last. It does generate more interest in readers, in booksellers in foreign rights deals, hopefully in movie rights — and I’ve just been invited as a last-minute guest to a festival. Having readily accessible ebooks makes a huge difference. As one Twitter user said (paraphrasing) “Being able to buy the book straight after reading about the win makes me feel like I’m living in the future.”

I suspect the best way to capitalise on all this is to write another book as soon as possible that lives up to Zoo City. (No pressure!).

Does it affect the way you approach your next book? Is there more pressure?
I’m lucky that I have my next three books loosely planned out and hopefully a comic for Vertigo — although there’s as different to Zoo City as Zoo City was to Moxyland. I’d like to be one of those lucky writers who gets to play across genre and write what they want to write and the readers will follow, like Margaret Atwood or Michael Chabon or David Mitchell. They’ll still always be strange books, though. We’ll see how it works out. But yes, definitely more pressure. The most important thing I can do write now is block out all this stuff, as much as possible, and write.

You work in many different spheres. Would you like to write novels full time? Or is all the different work you do important and necessary (financial considerations aside)?
It’s definitely necessary financially, but it’s also fun working across mediums, as a journalist (although not so much anymore and I miss it) and a TV scriptwriter and now a documentary director and comics writer. It makes me happy and I think it adds different skills to my toolset. I’d like to keep writing in all those fields. In an ideal world I’d try to get out a book a year, but one every two years with lots of interesting other work in between would also make me happy.

Tell me a bit about the cover art?
The South African and UK and French cover is by Joey Hi-Fi (aka Dale Halvorsen). Dale’s a genius. As I mentioned in my BSFA-award-acceptance-on-his-behalf-speech, he listens very attentively in meetings when you’re throwing around ideas, goes away, reads the book, throws most of those ideas out and comes back with something better than anything you could have ever imagined, rich and detailed and nuanced with lots of easter eggs pointing to key moments in the plot.

The US cover is by John Picacio who I met at WorldCon in 2009 and was blown away by his work. When Angry Robot consulted me about the cover design (a rare privilege in publishing, let me tell you) I asked for John and he did it as a personal favour, squeezed in between the George RR Martin Game of Thrones calendar he was doing. The characters are beautiful and carefully matched to the descriptions and references I sent him and the colours glow. He was amazing to work with.

What’s interesting is that both Dale and John were working from the same set of reference images I provided, from photos I’d taken on my cell phone in Hillbrow through to character references or pictures of hairstyles nicked off the internet and they created gorgeous and original covers in their own distinctive styles.

What next? Has this award changed your plans in any way? Or, once the applause and fuss has died down a bit, does everything go back to normal?
Luckily my two year old daughter has no interest in such things and only wants to climb on my head like a small blonde crazed koala, she’s so happy to have me home. It’s very grounding. I’ve already been catapulted back into my daily life and although I’ve just quit my job as fulltime TV writer to concentrate on novels and comics and maybe still some freelance TV — which was something that happened before all this — it’s already back to life as normal. I just need to get the next book finished by the end of the year.