Coming in from the cold in Lapland 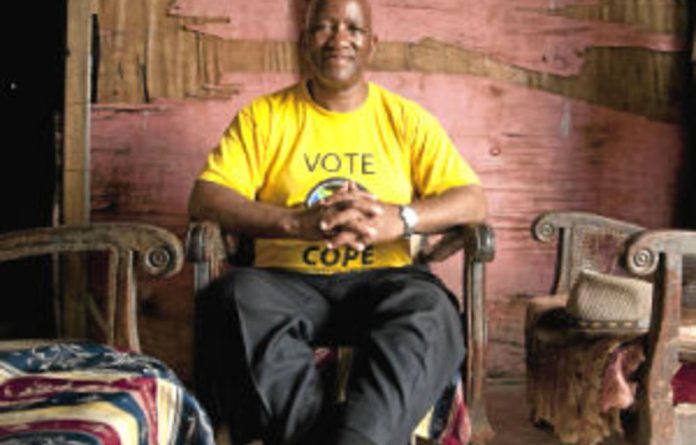 Uitenhage is part of the municipality where the electoral prize is Port Elizabeth. On the line is a former ANC comrade and the conversation makes Ngonyama miss out on visiting two houses while his entourage lobbies for votes.

“He wanted to know when I was coming back to the ANC,” Ngonyama tells us when we interview him in one of the two-room houses in Lovers’ Dale, so named because unemployed people here are said to kill time by making babies.

Smuts goes back to his roots

Former ANC heavyweight Smuts Ngonyama hit the campaign trail for Cope in Port Elizabeth. Can the party together with the DA topple the ANC in the upcoming elections? Watch our video.

“He told me: ‘Smuts, you must consider coming back; it pains us to see the likes of yourself out there.'” Ngonyama smiles on recalling his answer. “I said, ‘Thanks comrade, but I like being out in the wilderness.'”

The call is unsurprising: the ANC is suffering in Nelson Mandela Bay. Calculations based on the 2009 national and provincial election results gave the party less than 50% of votes in the metro, with the DA getting 28% and Cope 17%. The infighting in the ruling party is taking its toll — this time the DA is aiming at 37%. Together the smaller parties realistically hope to take the metro.

Ngonyama left the ANC more than two years ago, but still has the trappings of the man who didn’t “join the struggle to be poor,” as he once famously said. He arrives in a sleek black BMW, complete with a bodyguard-cum-chauffeur. The only difference is that those waiting for him are neither government nor political leaders. Few own cars – they set off on foot to knock on doors.

Dressed in a bright yellow Cope T-shirt and white running shoes, he starts out on the muddy route mapped out by locals. The mainly coloured area is currently in DA hands and its posters dominate the lampposts. Where are Cope’s posters?

“The DA has resources we don’t have. That’s why it’s important for us to do door to door, so people can see who we are.”

‘I don’t miss it’
A few years ago Ngonyama would not have noticed the DA’s money or posters. As then-president Thabo Mbeki’s right-hand man in Luthuli House he had access to plum BEE deals and lived a life that was the envy of others. Before that, he served as a provincial minister in the Eastern Cape.

He left to join Cope after the ANC recalled Mbeki as president. “I don’t miss it,” he declares defiantly. “I never used the blue lights, even when I was MEC. I always lived in my own house and never used government housing. And I don’t miss the fancy parties; now I enjoy watching TV from home.”

His move to Cope was a humbling experience. “It has given me space to be myself again and reflect on my conscience. I realised that working with people on the ground was my calling before I became a star. Now we’re fieldworkers, going from house to house and focusing on the people’s pains.”

His decision to join Cope stemmed from what he calls the demise of values in the ANC. “The ANC is not the same; the values I knew were crumbling,” he says. Attacking President Jacob Zuma’s recent claim, he retorts: “How can you say voting for the ANC is like voting for God? Is a vote for the opposition a vote for Satan? That can’t be right.”

The campaign in Lapland and Lovers’ Dale is very different from those Ngonyama knew in the ANC. There is no pack of journalists following his every move — just the Mail & Guardian and local SABC staffers, who do a quick interview and leave after half an hour.

Ngonyama grew up in Uitenhage and once worked at the VW factory — the lifeblood of the town — but few people seem to know him in Lapland. Here and there local residents, fuelled by Dutch courage, join the entourage with some song and dance moves, but mostly they seem bored.

Ngonyama is conducted to areas where a hole in the ground, covered with a stone, serves as a toilet for 10 shacks. “See, this is why I had to come back, to serve my people,” he tells us.

A resident complains about the entourage soiling his floor with their muddy shoes — courtesy of the gravel road outside — but he is ignored. “Come in, Mr Mayor, Elroy can clean up again,” a campaigner assures Ngonyama.

Ngonyama repeats his campaign mantra to Elroy in broken Afrikaans: “Ons kan verandering bring vir julle; gee ons net ‘n bietjie kans (We can bring change for you; just give us a chance),” he says. Elroy nods briefly and retreats into the darkness of his shack, which has no electricity and a broken water pipe.

Becoming mayoral candidate for the metro is an honour, says Ngonyama, but he doesn’t say the top job will be his. “I see Cope as part of a coalition that will rule the metro.”

Once the elections are over Ngonyama says he will return to the back benches of Parliament. The pay is far better than that of a councillor and in Cape Town he will be shielded from Lapland’s muddy roads and dirty toilets. But he will still find it hard to escape the political wilderness in which he now finds himself.