‘People are dying as we speak’ 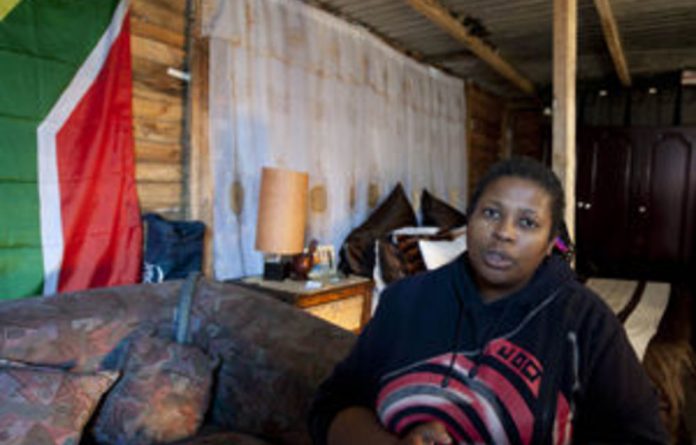 Grassroots lesbian activist Ndumie Funda was about to board a taxi last week in Gugulethu, on the outskirts of Cape Town when she got a bad feeling. “I saw a man staring at me. As I pulled back, he shouted out of the taxi: ‘You need to be taught a lesson because you are too much of a man.'”

The high-spirited Funda angrily asked him who he was addressing before her partner — the woman she is about to marry — pulled her back. But the 37-year-old woman with dreadlocks and engaging smile explained she had been quite ready to “moer him”.

Funda’s anger runs deep after years of enduring taunts and torment in the townships because of her sexuality. Her own fight against corrective rape began when she met 20-year-old Nosizwe Nomsa Bizana, who was raped at gunpoint by five men because she was a lesbian. Funda fell in love and became engaged to Bizana. But the HIV Bizana contracted during her brutal ordeal devastated her immune system and she died of meningitis in 2007.

“In response to that I started Luleki Sizwe because I saw there was a need and also not forgetting that my fiancée was not the only one effected,” said Funda of her NGO, which is run by volunteers and operates in 10 Cape Town townships to assist survivors of corrective rape.

“There were so many people who died before Nosizwe and their names were never heard of after their deaths. It is my calling to fight this terrible crime and everybody should join in to stamp it out.” Corrective rape is an increasingly common hate crime in which men rape lesbian women to “turn them straight” or to “cure” them of their sexual orientation. It is what led to the brutal murder of Noxola Nogwaza in KwaThema.

For many lesbians living in a township is like a hell run every day. The man who shouted abuse at Funda from the taxi last week was no different from the men who have tried on a few occasions to break into her home with a view to teaching her a lesson because she is a lesbian, Funda said. Most nights she calls the police and asks them to patrol her area, which is in a township near Cape Town that has no street lights.

“One man even shouted through my window that he would teach me a lesson because I’m like a man. I shouted back: ‘Your mother’s pussy you will teach me a lesson,'” she said. “Then I told my neighbours and they now keep guard for me. They are my watchdogs. I am luckily surrounded by supportive people who understand what I am trying to do.”

Last month three young members of Luleki Sizwe were robbed in Nyanga and one of them was brutally raped. Funda said this particular attack was not reported to the police, at the request of the women involved.

“The three girls came to me [the following] morning. I always tell them I hate the fact they roam around after 9pm. They need to check where they are going and who they socialise with because it is dangerous out there. But they still went into this place where they drank.” The woman who had been raped was badly bruised and was scared to go to her home, said Funda.

“I drove her home to explain the situation to her mother. These guys took her cellphone, which she had hidden up her vagina [for safety]. Then they said the only thing left to do was to rape her because she was a lesbian.”

‘Common ground’
Funda has a supporter from Johannesburg who helps her survive while she helps others. Overseas donors have provided funding for a safe house for lesbians in emergency situations.

This week was a watershed, as Luleki Sizwe and other organisations working against gender violence held a meeting with the department of justice and other government officials in Parliament to discuss how to deal with the prevalence of corrective rape. What came out of the meeting was the establishment of an intervention plan and a task team to fight all forms of hate crime.

“From the outset we dispelled a myth that government is not concerned about the plight of the victims of corrective rape,” he said. Among the people attending the meeting in Parliament this week was a glamorous young woman who miraculously survived a five-hour rape ordeal in Cape Town last year by a man who beat and strangled her in an effort to “turn her straight”. Appearing vibrant and confident, she has now asked that her name not be used in media reports and is trying to get her photographs removed from websites. Her court case will continue on May 17.

Funda said she had had to go into hiding in December as she had become a target because of her constant campaigning against corrective rape. To this day she takes different routes home every day.

“I have been to the house so many times, but I still don’t know how to get there, because she goes a different way every time,” said Henry Bantjes, a gay activist who is helping Funda with her campaign.

Bantjes said he was amazed at Funda’s drive and determination to fight this hate crime. She has succeeded in collecting more than 920 000 signatures for an online petition via the civic organisation website, Avaaz.org, calling on President Jacob Zuma and the minister of justice, Jeff Radebe, to take action against corrective rape. Among the issues she wants urgently addressed is that children are being discriminated against at school for being lesbian or gay and that there need to be more shelters for lesbians.

“I was told by one woman that she could help me get this victim of rape into their shelter, but she needs to ‘act straight’. It mustn’t be known she is a lesbian, she told me. People are dying and that is what I was told.”

Funda said she had been telling her members that, although the government had taken a giant leap forward at this week’s parliamentary meeting, they should not vote in the municipal elections on May 18.

“We need immediate action. Our Constitution protects us from hate crimes, but it doesn’t go any further. People are dying as we speak. We need harsher sentencing.”

Corrective rape: A horrific crime fed by silence and taboo
Victor Mukasa is a transgender activist from Uganda, who was a victim of corrective rape in her own country. Working in a hostile environment back home, she changed her first name to make her life easier and today she coordinates the human rights defenders project at the Coalition of African Lesbians (Cal) in Johannesburg.

“Corrective rape is particularly prevalent in South Africa, but more and more cases are being exposed in Uganda and many other countries in Africa. It is horrific, but corrective rape certainly looks like it is on the rise in South Africa,” she said. “Punitive rape is another hate crime emerging in Africa — when family members are involved in organising the punishment of a lesbian.”

Many organisations such as Cal, which raises awareness and assists rape survivors, do not have access to statistics on corrective rape and official awareness about this hate crime is only now starting to grow. Cape Town NGO Luleki Sizwe estimates that more than 10 lesbians are raped or gang-raped each week in the city of Cape Town alone, while in the past decade more than 31 lesbians have been murdered because of their sexuality. The group says around 510 women report being the survivors of corrective rape in South Africa each year.

While this hate crime is growing, police appear to have their guard up when pronouncing whether a case is rape or corrective rape, say activists.

While investigating the case of murdered lesbian Noxolo Nogwaza, Lieutenant Colonel Tshisikhawe Ndou told the M&G: “This office hereby confirms that the Tsakane SAPS are investigating a case of rape and murder. However, at this stage there is no evidence to suggest that the deceased was raped and killed because of her sexual orientation.” On Wednesday Ndou said there had been no arrests as yet.

“There is no hard evidence to suggest this is a corrective rape and we cannot go on speculation. But even if it is, there is nothing in South African criminal law that would allow us to charge someone with corrective rape,” he said. “It is our primary responsibility to investigate and catch the perpetrators of this evil crime.”

Murdered for their sexuality