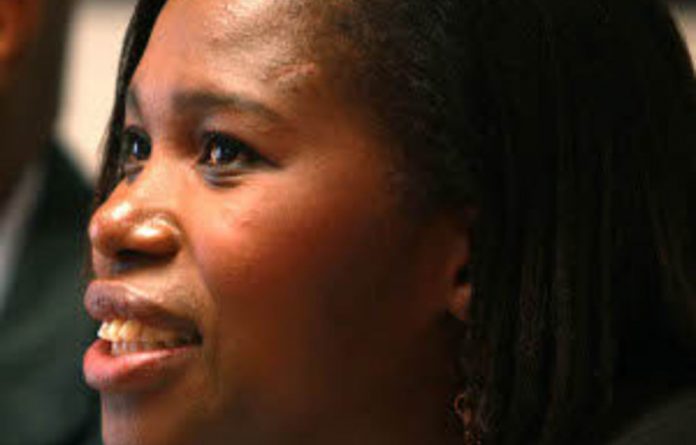 Born in Bizana in the Eastern Cape, Mda grew up in Mthatha and went on to become an executive committee member of the ANC Youth League.

Read The rise and fall of Anele Mda

She defected to the Congress of the People (Cope) when it split from the ANC in 2008.

At the time, she said defectors to Cope had “jumped off the train when they saw that it was not going in the direction they liked”.

In November that year, Cope had to apologise after Mda reportedly called President Jacob Zuma “a rapist”, even though he was acquitted of rape in 2006.

She reportedly said, in the run-up to the general election, that if the ANC was re-elected into government under Zuma, “rape would no longer be a criminal offence”.

However, the suspension was lifted just two months later when she apologised for “any prejudice my utterances might have caused”.

At a disciplinary hearing she pleaded guilty to making racist, sexist and politically intolerant remarks towards Carter.

Zuma was present at the announcement of Mda’s return to the ANC on Monday, but did not speak.

He left the talking to ANC secretary general Gwede Mantashe.

Mantashe said the ANC invited all those who had left “to come back”.

“Come make noise here … ANC is their home,” he said.

Explaining her decision to return to the ANC, Mda said Cope had shown no political vision.

“I’m back and more wise now,” she said. She has been given no position within the ANC.

Cope was established by former defence minister and ex-ANC chairperson Mosiuoa Lekota, his former deputy Mluleki George and former Gauteng premier Mbhazima Shilowa, who broke away from the ANC after it decided to recall former president Thabo Mbeki from office. They accused the ANC’s new leadership of deviating from the freedom charter.

The party has since been beset by infighting and recently split into two factions, one led by Lekota and the other by Shilowa.

In February, Shilowa was barred from Parliament. His faction later failed to timeously submit any lists of candidates for the local government election to be held on May 18. — Sapa