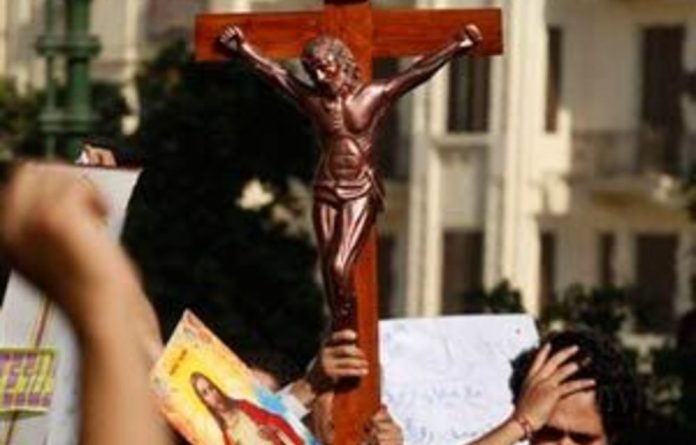 Egyptian media on Monday accused “anti-revolutionaries” of trying to trigger sectarian conflict, as a top cleric warned the country could be engulfed in civil war.

The government has vowed to use an “iron fist” to ensure national security after Saturday’s deadly clashes in Cairo, branded by Nobel peace laureate Mohamed ElBaradei as “religious extremism of the Middle Ages”.

“We are facing the anti-revolutionary groups who are convinced that any success of the revolution was an even greater threat to their interests and so are trying to fuel confessional conflict,” wrote the flagship Al-Ahram newspaper.

Fierce clashes broke out between Christians and Muslims in northwest Cairo’s working-class district of Imbaba where 12 people were killed, scores injured and a church set ablaze. Six Muslims and four Christians were among the dead, while two bodies were still unidentified.

The two groups clashed after Muslims attacked the Coptic church of Saint Mena in Imbaba to free a Christian woman they alleged was being held against her will because she wanted to convert to Islam.

Since the ouster of former president Hosni Mubarak, Egypt has been gripped by insecurity and sectarian unrest, amid — by the government’s admission — a “counter-revolution” by old regime diehards aimed at sowing chaos.

Ali Gomaa, Egypt’s grand mufti and chief interpreter of Islamic law, was quoted in main independent daily Al-Masri Al-Yom as warning of the potential for civil war, “because of outlaws who want to defy the authority of the state”.

Contrary rumours
“Contrary to rumours that there were weapons inside the church, it was the owner of a cafe near the church who fired a gun,” he told the government daily Al-Akhbar.

Security officials said police arrested the Muslim husband of the alleged convert, saying he had spread the word that his wife was being detained in a building next to the church.

The Salafists, a puritanical Islamist sect accused of being behind the Imbaba clashes, denied they had any role in the violence.

Prominent Salafi cleric in Cairo, Abdel Moneim al-Shahat, said the Imbaba clash “does not reflect the Salafist thought which prohibits the incitement of confessional conflict”.

Saturday’s violence also angered ElBaradei, a prominent figure in the 18-day uprising that toppled Mubarak, who called on Twitter for swift action against such “religious extremism and practices of the Middle Ages”.

The Coalition of the Youth of the Revolution, an umbrella movement for the groups that launched the revolt against Mubarak, said “the regrettable events at Imbaba are evidence of a catastrophic security failure” in Egypt, and criticised the military authorities for not having reacted in the absence of the police.

Meanwhile, 1 000 Copts continued their sit-in in front of the headquarters of the state television network Monday in protest at what they called the authorities’ “laxity” towards the attacks on Christians.

They briefly scuffled with soldiers outside the building after surrounding two Muslim men they said were armed with knives. The soldiers used tasers in the scuffle, witnesses said.

Protesters also threw stones at the building, shattering a window.

On Sunday the government warned it will use an “iron hand” to maintain security.

Authorities would “strike with an iron hand all those who seek to tamper with the nation’s security”, Justice Minister Abdel Aziz al-Gindi said after the cabinet held crisis talks on the violence.

In Brussels EU foreign affairs chief Catherine Ashton urged Egypt “to bring those responsible for the violence to justice, before civilian courts”.

For months, Egypt has been experiencing a rise in sectarian tensions fuelled by claims that Christian women who converted to Islam were kidnapped and held in churches or monasteries.

Copts, who account for up to 10% of Egypt’s 80-million people overwhelmingly made up of Sunnis, complain of discrimination and have been the targets of sectarian attacks. — AFP