Els leads class of six into golf’s hall of fame 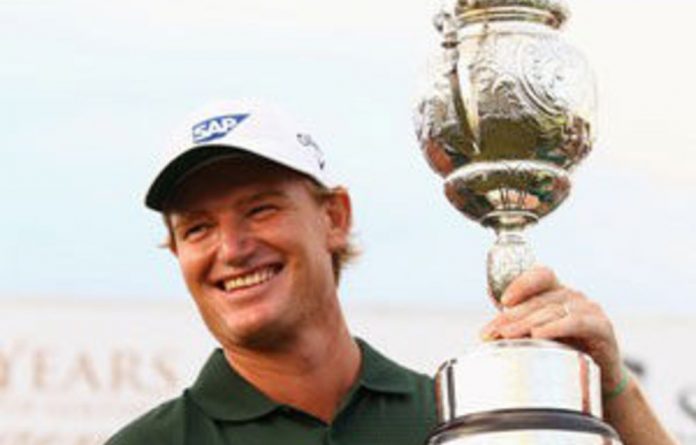 Ernie Els followed the trail of South African idol Gary Player by winning golf tournaments all over the world, a journey that took him all the way to the World Golf Hall of Fame.

Els, a three-time major champion and the ultimate global player of his generation, was among six people to be inducted on Monday night at the World Golf Village.

The 41-year-old South African, known as the “Big Easy” for his languid swing and soothing smile, won 62 times around the world, including the United States Open twice and a British Open at Muirfield.

“It’s been a long journey coming from South Africa,” Els said at the two-hour ceremony.

Even as he still pursues more majors, Els is heavily involved in research and finding a cure for autism. His 8-year-old son, Ben, is autistic, and the boy was escorted into the room as a video of Els’ career was being played, his eyes fixated on the screen. Els later spoke of the joy he feels having his son sit on the range with him as he hits balls.

“He’ll sit there and watch the ball take off in the blue sky,” Els said.

Els was elected on the PGA Tour ballot. Japanese icon Jumbo Ozaki, who won more than 100 tournaments, was voted into the Hall of Fame on the International ballot. Doug Ford and the late Jock Hutchison, both two-time major champions, were selected through the Veterans category. Former president George Bush and the late Frank Chirkinian, the tv golf producer for CBS Sports, were selected through the Lifetime Achievement category.

Their induction brought membership in the Hall of Fame to 136.

‘A very special feeling’
Els and Ford were the only inductees at the ceremony. Ozaki has a back injury that makes it difficult to travel, and he felt he needed to be home with his family as Japan recovers from the earthquake and tsunami. Bush also was not able to attend. Chirkinian had a videotaped message that was made just days before he died.

The ceremony included a tribute to another Hall of Famer, Seve Ballesteros, who died on Saturday of a cancerous brain tumour.

Players must be at least 40 to be considered for the Hall of Fame, and Els was voted in on his first try. This is the first time since Vijay Singh in 2006 when an active player was inducted. Els practiced on Monday morning at the TPC Sawgrass as he prepares for the Players Championship this week.

Els grew up knowing he would have to travel the world to play golf. The example came from Player, who has logged more air miles than any other golfer.

Els won the Junior World Championship in San Diego as a teenager, beating Phil Mickelson. He won nine times on three tours when he broke through in 1994, winning the US Open at Oakmont in a playoff that lasted 20 holes in stifling heat.

He won another US Open at Congressional three years later, and captured the British Open in 2002.

“Coming from South Africa, I didn’t even know there was a Hall of Fame,” Els said. “I look back in the records now, the Hall of Fame has been going since 1940. So obviously, I missed something. My dream was to win majors and to try to do what Gary Player did, win the Grand Slam and win a bunch of golf tournaments, trying to get onto the US tour and things like that.”

‘Like waiting for an old girlfriend’
Asked what made him unique, Els said he would leave that for others to decide.

“You don’t get inducted in here without doing something to catch people’s attention, whether it’s winning 18 or 19 majors like Jack Nicklaus or building golf courses like Pete Dye,” he said. “There are people here that have done special things in the game of golf. I feel I’ve won my fair share of tournaments around the world, a truly global golfer like my idol, Gary Player.”

The Hall of Fame induction is an awkward one for Ford, who was part of the original Hall of Fame in Pinehurst, North Carolina. He never received enough votes for election on the PGA Tour ballot, but was taken in the Veterans category.

“It’s like waiting for an old girlfriend, I guess. You keep thinking, ‘What did I do wrong?’,” Ford said before the ceremony. “I thought I had some fairly good records, and you just hope that you get here. Of course, it’s an honour. You just go to get here somehow.”

He told of wanting to play baseball for the Yankees, and trying to decide whether to sign with one of its farm teams. Ford said his father asked him how long he could play baseball, and he said about 10 years.

Ozaki won only one time outside of Japan, yet he inspired a nation of golfers behind him. He captured the Japan Golf Tour money list 12 times and won the Japan Open five times.

Bush becomes the second US president in the World Golf Hall of Fame; Dwight Eisenhower was inducted in 2009. Bush was selected for helping to raise the profile of golf, serving as honorary chairperson of the First Tee and the Presidents Cup.

Chirkinian died of cancer on March 4, just three weeks after learning he had been selected for induction. He was the foremost golf producer at CBS Sports, leading its coverage of the Masters for nearly four decades. Among his innovations were installing a camera on the blimp and using scores in relation to par to show who was leading tournaments. — Sapa-AP