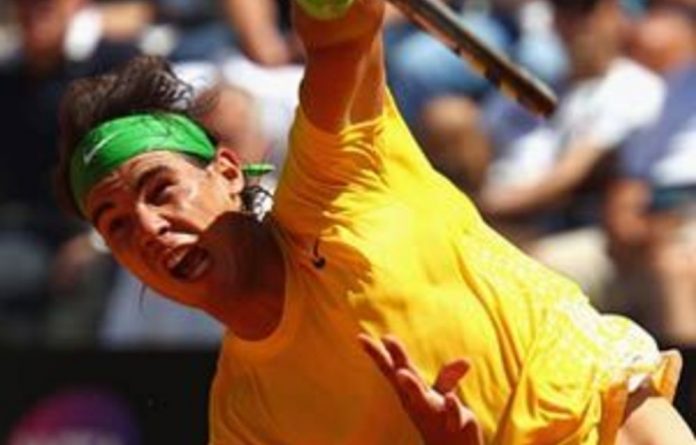 Rafael Nadal cut a downbeat figure as he talked about his uncomfortably narrow escape in the clay Rome Masters second round on Wednesday.

The world number one was reeling at a set and 4-3 down against unheralded Italian qualifier Paolo Lorenzi before finally clicking into gear and scorching through nine games in a row to win 6-7, 6-4, 6-0.

At 4-4 and 30-0 down in the second set, undisputed clay king Nadal was just six points away from defeat.

But the 24-year-old insists he can only get better from here.

“It’s a long time since [I’ve played as badly] on clay but it’s not the moment to make comparisons, I have to look forward,” he said.

“He played his match with good serve and volleying, good movement. I played badly but the positive thing is that tomorrow I will play better because it’s not possible to play worse.”

He also suggested that the different conditions between Madrid last week, where he lost in the final to Novak Djokovic, and Rome this week had contributed to his struggles.

“There’s a big difference between Madrid and Rome, there’s the altitude [in Madrid] and the speed of the ball,” he added.

“After losing the final it makes it more difficult. You don’t have time to practise, you’re arriving a bit more tired, a bit more sad because you lost the final.

“All these facts make the [first match] difficult but I knew before the match that I would have to fight to be in the third round.

“I’m in it and tomorrow [Thursday] I have the chance to play a little better.

“I have to forget the Madrid final and try to get to a better level tomorrow to have a positive tournament here.

“I have to have confidence in myself tomorrow and I have to play more aggressively with the forehand, move faster, step more into the court.

“Sometimes there is a small difference between playing better and playing badly.”

“I was trying not to believe that on the other part of the court there was Nadal,” he said, looking delighted with the way things had gone.

“I was trying to think that there was another player there and trying to play my best tennis.

“I was feeling really good on the Centre Court. I was not thinking about Nadal because then it would have been too much emotion.”

Nadal seemed to be on track when he broke Lorenzi in the sixth game after the Italian had doubled faulted on game point and then given up the break with a netted backhand.

But incredibly the world number one followed that up with four forehand errors to give up the break-back to love.

The first set went to a tie-break during which each gave up a couple of mini-breaks until Nadal netted a forehand to hand Lorenzi a set-point, which he converted when the Spaniard missed with a wild smash.

Normal service of sorts was resumed from the off in the second set as Nadal broke in the opening game when a weak backhand slice from Lorenzi plopped into the net.

However, Lorenzi broke back in the sixth game after a cross court backhand pass from Nadal landed just the wrong side of the line.

Nadal forced two break points in the next game but Lorenzo saved them both, including the first with a cheeky dropper, to nudge in front 4-3.

However on his next service game he moved 30-0 in front only to drop four points in a row and give up the break.

Having misfired all day with his forehand, Nadal saved a break point with it in the next game and then ironically sealed the set with a smash.

The third set was little more than a procession. — AFP