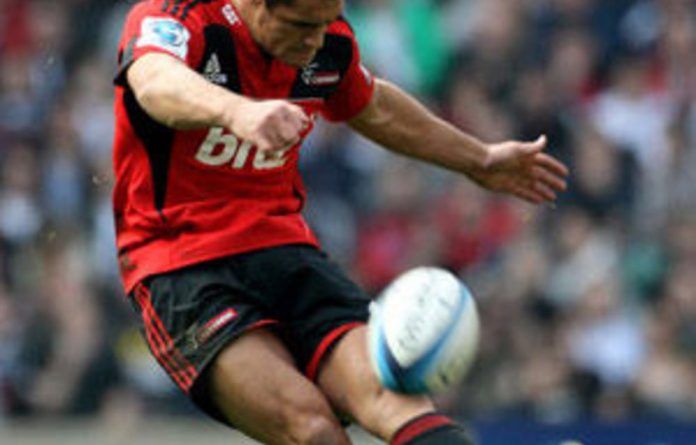 The second-placed Reds have home advantage against the Blues and have won all five games in Brisbane this season, setting up a compelling clash on Friday at the head of the southern hemisphere championship.

Meanwhile, seven-time winners Canterbury, disrupted by earthquake damage to their stadium and currently lying third, can field Carter alongside All Blacks captain Richie McCaw for the first time this season against Central Cheetahs.

Points-machine fly-half Carter has been sidelined with a hamstring injury since March’s win over the Coastal Sharks in London, while McCaw returned from a bruised foot in April but sat out last week’s win with concussion.

For the Blues, All Blacks inside centre Luke McAlister (ankle) and lock Anthony Boric (hamstring) are returning from injury, while Queensland have Ben Tapuai replacing knee-victim Mike Harris at inside centre.

Friday’s winner in Brisbane will finish this weekend’s 13th round on top of the standings with five rounds left to next month’s top-six playoffs.

The three conference winners qualify for the playoffs along with the next three teams with the highest number of points.

‘On the verge of something special’
Auckland have won on their last three trips to Brisbane, with the Reds’ last success at home coming in 2004.

“It has been a challenging period without a break, but the team has aimed up each week,” Reds’ coach Ewen McKenzie said.

“I expect the same on Friday night and being a contest between one and two on the ladder, we’re definitely not struggling for motivation.

“Our fans have been waiting a long time to see the Reds on top again and we’re now on the verge of something very special.”

Once again the Reds’ hopes will hinge on their influential combination of fly-half Quade Cooper and scrum-half Will Genia.

Meanwhile, the bolstered Crusaders could take over at the top of the New Zealand Conference if Auckland go down and they defeat the Cheetahs in Bloemfontein.

The Cheetahs have been running into form in recent weeks with wins over lowly ACT Brumbies and Golden Lions, but the Crusaders are a significantly bigger obstacle this weekend.

Lost faith
The Stormers will remain on top of the South African Conference for at least another week as their nearest rivals the Sharks have the weekend off.

The Cape Town-based Stormers are in New Zealand and play the Waikato Chiefs in Hamilton on Saturday.

Skipper Victor Matfield will start from the bench for the Bulls against the Melbourne Rebels at Loftus Versfeld on Saturday.

With Matfield expected to come on as an impact player late during the second half, Springbok scrumhalf Fourie du Preez will be wearing the captain’s armband for the defending champions.

The Rebels left wayward English fly-half Danny Cipriani in Melbourne for disciplinary reasons as they tour South Africa for the first time since joining the expanded Super Rugby competition this year.

The Rebels’ players and management said this week they had lost confidence in Cipriani after a series of late nights on the town, breaching team protocol.

In this weekend’s other games, the Otago Highlanders host the Wellington Hurricanes in Invercargill, the Brumbies take on the Lions in Canberra, while the Western Force and NSW Waratahs have byes. — AFP