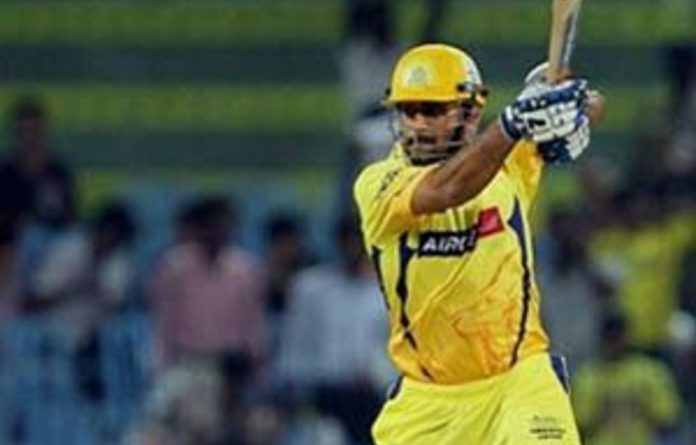 Dhoni hit five fours and four sixes in his 31-ball knock and shared 96 runs with Subramaniam Badrinath (55) to lift Chennai from a shaky 68-3 to 176-4 after electing to bat at the Chidambaram Stadium.

Delhi, who have been set back by the absence of injured captain Virender Sehwag, were never really in the hunt, folding up for 158-6 in 20 overs with Ravichandran Ashwin and Dwayne Bravo grabbing two wickets apiece.

The comfortable win propelled Chennai to the top of the points table while Delhi bowed out of contention for a place in the qualifying rounds after going down to their eighth defeat from 12 games.

Chennai, the defending champions, lost opener Michael Hussey (five) in the first over when he was trapped leg before by left-arm paceman Irfan Pathan.

Suresh Raina (14) and Murali Vijay (35) were also dismissed in quick succession, leaving the hosts in trouble by the 11th over but Dhoni and Badrinath revived the innings by their blazing knocks.

Dhoni carted the last two balls of the innings for sixes, as Chennai scored 37 in the final two overs to cap a miserable outing for Delhi.

Badrinath, enjoying a purple patch with the bat, also punished the erratic Delhi bowlers during his 43-ball innings, hitting six boundaries and a six.

Paceman Ajit Agarkar was the most expensive bowler, leaking 49 runs from four overs while Pathan gave away 40. The only decent bowling performance came from Varun Aaron who returned figures of 1-20.