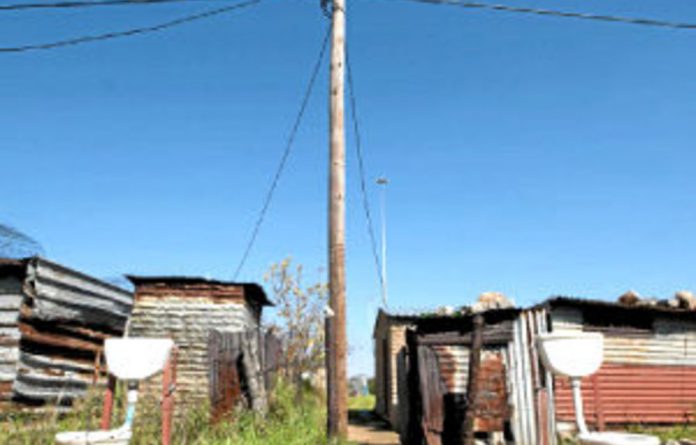 The municipal election campaign is in the toilet, literally — the delivery of the most basic service of all has come to dominate what may be the first democratic poll in South Africa fought principally on issues of government performance.

A Cape High Court judgment a fortnight ago slamming the Democratic Alliance-controlled City of Cape Town for erecting 50 unenclosed lavatories in the Makhaza section of Khayelitsha gave the ANC an opportunity to attack the twin planks of the DA’s campaign — effective governance and the shedding of racial baggage under the slogan “we deliver for all”.

It was a chance once again to portray the party as a voice of privilege in general and white privilege in particular and to fight on the familiar ground of race.

But this strategy backfired just 10 days before voting when 10-month-old media reports of about 1600 open toilets in the ANC-controlled municipality of Moqhaka in the Free State were reprised in the Sunday press. Nothing had been done since the issue was first exposed by City Press in July last year.

Outraged ANC officials dedicated much of a key pre-election national working committee meeting this week to discussing the scandal, said people who were present, while party leaders made a high-profile site visit to Moqhaka on Tuesday, promising action. ANC spokesperson Keith Khoza said the leaders who went there were “received warmly” and within two days 300 enclosures were built.

The ANC also emphasises that, in contrast to the DA, which went to court, it has acknowledged its error and has started to build proper toilets.

The nervousness of the local ANC members in Moqhaka was apparent on Thursday when they harassed a Mail & Guardian photographer because they assumed she was from the DA. But the story continued to spiral beyond the reach of spin control. As the M&G website reported on Wednesday, the tender for the construction of the toilets had been won by an ANC councillor, Mantebu Mokgosi, who has since become mayor, and her company did the job so badly that it had to be redone. Moqhaka’s ANC chief whip has been accused of benefiting from a ubsequent contract.

And while Khoza insists the scandal will not affect voting, senior ANC leaders confirmed the mayor would be axed soon in an effort to minimise the damage and separate an erring deployed cadre from the party.

All of this took place against the backdrop of simmering discontent over service delivery in poor areas across the country. The protests in Ficksburg that culminated in the brutal killing of Andries Tatane brought home graphically the scale of discontent of many residents.

And in different ways across the country, from billing problems in wealthy Johannesburg to sanitation in Cape townships and housing, water and electricity across impoverished areas, it was delivery issues rather than race that have animated the agenda.

‘Pushing its Cape Town story’
The ANC’s campaign materials, centring on the party’s manifesto priorities, focus on the huge scale of housing, infrastructure and basic service delivery since the advent of democracy, while trying to acknowledge areas of persistent weakness, members of the party’s campaign team said.

Meanwhile, the DA is pushing its “Cape Town story” and examples from other municipalities it controls, such as Kouga and Baviaans, with the aim of showing that it has done a better job of managing local government for all residents than the ANC.

The ANC has been under pressure and even its internal focus groups have shown that it needs to step up the pace.

“Our focus groups said people are impatient and want to see service delivery. But they said the ANC is still the one capable of doing that,” said Khoza.

Streamlining of systems
The ruling party has told voters that there is R800-billion in the kitty for infrastructure, most of it for local government. “We want to highlight the importance of the developmental state on local government level,” Khoza said.

The streamlining of systems to put local government in line with national and provincial government now meant a mayor could replace a minister, he said, meaning that competent bureaucrats would not be limited to the provincial and national spheres, where the pay and benefits are better.

Also damaging to the ANC’s election campaign has been the involvement of communities for the first time in selecting candidates which has made high-level intervention or manipulation apparent.

Political parties are unwilling to make public the detail of their tracking polls, perhaps because they see them as providing crucial intelligence on the state of the contest, and there is a surprising dearth of independent polling data available.

The ANC said it did not depend on polls but had instituted a media monitoring project that would track how the media had portrayed the party. “We will then be able to see whether the criticism we get is justified.”

The big trends in the DA’s own numbers, which the M&G was shown on condition that it did not reveal precise figures, record a step-change in the willingness of black voters to consider the party. How much of this is attributable to growing frustration with the ANC and how much to an election campaign relentlessly focused on the DA’s new identity is impossible to say, but some of the data are suggestive.

In March and early April, when the DA message went largely unanswered by the ANC, black support for the women in blue steadily tracked up to levels approaching 10 times higher than their historical averages.

It fell marginally as the ANC began to get out its own message, including claims that the DA has not jettisoned its racist past and that its new message of delivery and good governance relates only to wealthy areas. Exhibit number one was the Makhaza open toilet saga and an initially tin-eared handling of calls for the removal of Hendrik Verwoerd’s statue in Midvaal.

The ANC has also begun pushing its own delivery record more effectively, reminding voters of housing construction programmes, water connections and infrastructure development. In KwaZulu-Natal the polling data suggest this strategy and divisions in the Inkatha Freedom Party will reap ignificant dividends.

It is clear from the polls, too, that the proportion of undecided and “won’t vote” members of black communities is higher than ever. The final result will be heavily influenced by how the undecideds break (polls suggest most will plump for the ANC) and by turnout, which is historically stronger in traditional DA areas in local elections.

Black support for the DA is highest in Limpopo, Mpumalanga and Gauteng, rather than in the Western Cape. These shifts may not see municipalities changing hands or massive swings in the national voting percentage.

But if the DA polls an average of 10% in black areas, its leaders will view this as a good foundation for the real fight in 2014.