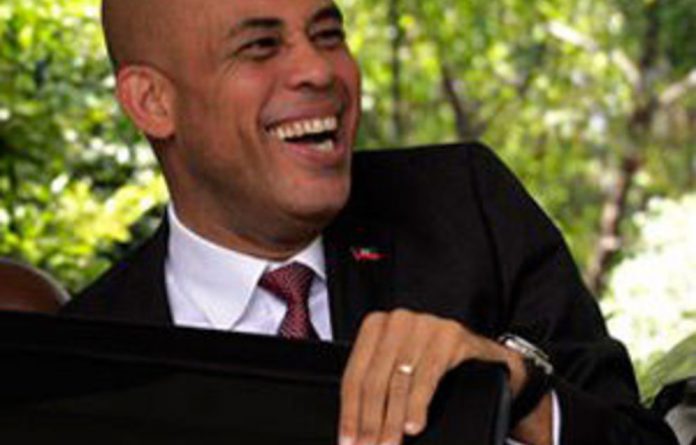 Michel Martelly faces a mammoth task after he is sworn as Haiti’s new president on Saturday, inheriting a shattered Caribbean nation haunted by recent disaster and decades of political turmoil.

The troubled country of less than 10-million people, half of whom live off less than $2 a day, garnered international attention in January 2010 when it was struck by one of the deadliest earthquakes of all time.

More than 225 000 people were killed and one in seven of the population rendered homeless when a magnitude-7 earthquake turned what was already the poorest country in the Americas into a full-on disaster zone.

Sixteen months on, the pace of reconstruction is painfully slow for hundreds of thousands of traumatised survivors who lost everything and are now forced to subsist in squalid tent cities around the still-ruined capital.

The sudden return in January of former dictator Jean-Claude “Baby Doc” Duvalier after 25 years in exile and then in March of Jean-Bertrand Aristide, Haiti’s first democratically-elected president, reopened old wounds.

This presents something of a poisoned chalice to Martelly, a 50-year-old former carnival singer and political novice who rose unexpectedly to power with a hope-filled campaign that promised a rupture from Haiti’s violent past.

Martelly has invited ex-dictator Duvalier and Aristide, the shantydown priest who championed the poor and usurped him, to his inauguration as a gesture of reconciliation but it is unclear if they will both attend.

One important guest will be former United States president Bill Clinton, the United Nations envoy who co-chairs the Interim Haiti Reconstruction Commission — set up after the earthquake to hold the purse stings of about $10-billion in pledged aid.

The ceremony will begin at 8am (13pm GMT) in a specially constructed wooden building that will house the country’s new National Assembly in the centre of the spruced-up capital.

The former Parliament building was flattened in the earthquake along with much of Port-au-Prince and other main towns like Leogane and Jacmel.

French Foreign Minister Alain Juppe and a dozen other heads of state were to attend the ceremony, including the president of the Dominican Republic, Leonel Fernandez, whose country shares the island of Hispaniola with Haiti.

Martelly’s stunning rise to power — a year ago he was better known as “Sweet Micky” who got his clothes off during lewd stage performances — has driven up expectations that he will have to fight hard to manage as president.

First round election results led to deadly riots in December after Martelly was said to have finished third and out of the race. An outcry led by the United States ushered in a team of international monitors who found massive fraud in favor of the ruling party candidate.

President René Préval’s handpicked protege Jude Celestin was eliminated from the race in February and Martelly was reinstated to compete in a long-delayed run-off against former first lady Mirlande Manigat. — AFP