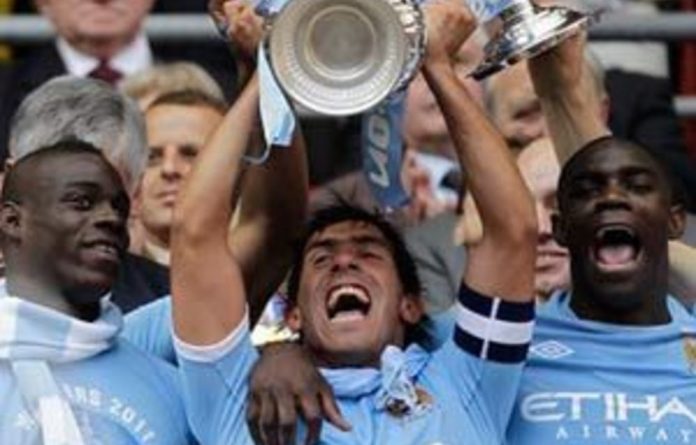 Côte d’Ivoire international Yaya Toure was the hero once again for City, rifling in a shot on 74 minutes to settle a largely one-sided encounter.

The win gave City their first piece of silverware since their victory in the 1976 League Cup final at Wembley and completed a rare double on the same day that their rivals Manchester United sealed the Premier League.

It also sealed a fine week for City, who had clinched qualification for next season’s Champions League on Tuesday by beating Tottenham.

“I can only say that I’m very happy for all the supporters,” a delighted City manager Roberto Mancini told ITV afterwards.

“After many years, they deserved to win this trophy,” Mancini added, gesturing towards City’s delirious army of fans.

“We need to improve but we are very happy. We did a small piece of history of Manchester City. We start now.”

Goal hero Toure — who had also scored the winner in last month’s semi-final victory over Manchester United — was jubilant to have helped City end their long wait for a piece of silverware.

“The dream is now … It’s fantastic to win. It’s fantastic for the history of the club,” said Toure. “We wanted to win something and get through to the Champions League. It’s amazing.”

Fine saves
City, who dominated throughout, might have won by more had it not been for a couple of fine saves by Stoke goalkeeper Thomas Sorensen early on when Mancini’s men were threatening to run riot.

City, who had been lifted by captain Carlos Tevez passing a late fitness test, settled swiftly and took control of the the opening exchanges.

Tevez might have put City ahead after only five minutes, his curling shot headed for goal after taking a slight deflection off Ryan Shawcross, only for Sorensen to save superbly at full stretch.

There was little respite for Stoke thereafter, and Shawcross was deeply relieved when he stuck a leg out to intercept a low Aleksandar Kolarov cross in the 10th minute which came dangerously close to being an own goal.

Moments later it was Toure’s turn, the Ivorian letting fly from 30 yards with a ferocious drive that beat Sorensen only to go inches wide.

With City rampant, Stoke’s defence showed signs of cracking under the pressure, and German centre-half Robert Huth was lucky to escape punishment for a blatant off the ball elbow that flattened Mario Balotelli.

Stoke’s only chance on goal in a lop-sided opening period came when Trinidad striker Kenwyne Jones found some space in the City box, only for his shot to be blocked by Vincent Kompany.

At the other end Stoke again had Sorensen to thank after another brilliant save on 24 minutes, this time from Balotelli, whose curling shot was hurtling towards the top corner before it was palmed away to safety.

City should have gone 1-0 up on 35 minutes, when a wonderful ball from Tevez found Balotelli in the box and in the ensuing melee David Silva’s shot into the turf bounced up and over the bar with Sorensen nowhere.

Five minutes before half-time Huth earned the booking he should have received earlier, cautioned by Martin Atkinson for an ugly challenge on Micah Richards.

A scrappy start to the second half saw Stoke enjoy their best spell but City’s defence were more than equal to the challenge.

City again spurned a good chance on 56 minutes when a swift breakout of defence saw Tevez surge down the right before crossing to the unmarked Silva who took too long to get his shot away.

With the clock ticking down, Mancini took the bold move to replace Gareth Barry with the more attacking option of Adam Johnson on 74 minutes.

A minute later, Toure struck the decisive blow for City. A shot from Balotelli deflected off Marc Wilson and fell kindly to the former Barcelona midfielder who blasted an unstoppable first-time shot past Sorensen. — AFP