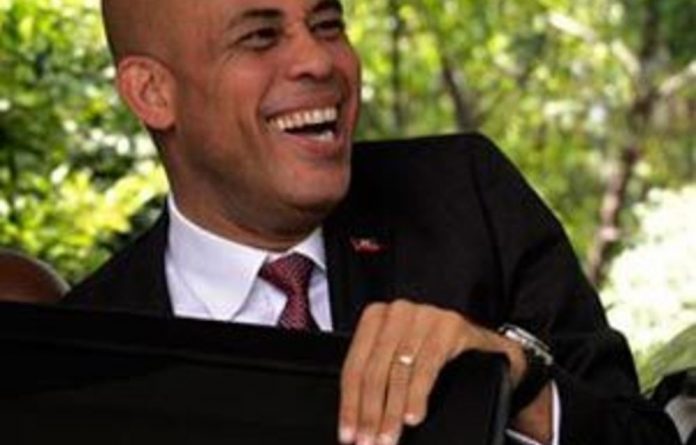 Michel Martelly, a charismatic singer with no government experience, was sworn in as Haiti’s president on Saturday, shouldering a daunting task of reconstruction in his poor, earthquake-battered nation.

The shaven-headed former entertainer (50) took the oath of office before Haiti’s national assembly in a prefabricated United Nations-supplied structure erected on the site of the old Parliament building destroyed by last year’s earthquake.

Reflecting the huge rebuilding challenges facing the Western Hemisphere’s poorest state, a power outage struck as the swearing-in ceremony started, but Martelly went ahead with the oath.

In a small but volatile Caribbean nation with a history of revolts and dictatorships, the inauguration marks the first time that a democratically-elected Haitian president hands over power to a freely-elected leader from the opposition.

Martelly was due to give a speech outside the crumbled structure of the quake-damaged white-domed presidential palace, near a central square in Port-au-Prince where thousands of quake homeless are still sheltering in a temporary tent camp.

The new president, a star of Haiti’s Konpa carnival music who is known as “Sweet Micky,” wooed mostly poor and illiterate voters with a potent promise of change in a whirlwind election campaign that culminated in his victory in a March 20 run-off.

He has vowed to transform Haiti from a development basket case into a new Caribbean destination for investment and tourism that will provide jobs and better lives for its 10-million people.

Among those attending the swearing in were the presidents of other Caribbean states, including the neighboring Dominican Republic, and representatives of major donor nations.

Martelly won a popular mandate in a sometimes turbulent election protected by UN peacekeepers. The vote was steered through by the international community led by the US, which persuaded local electoral officials to rectify several alleged fraud cases.

The new president can count on international support, including from the US, as he sets out to rebuild one of the world’s poorest and disaster-prone countries, where hundreds of thousands of destitute earthquake victims are demanding jobs and homes. — Reuters