SA voters and the ‘gatvol’ factor 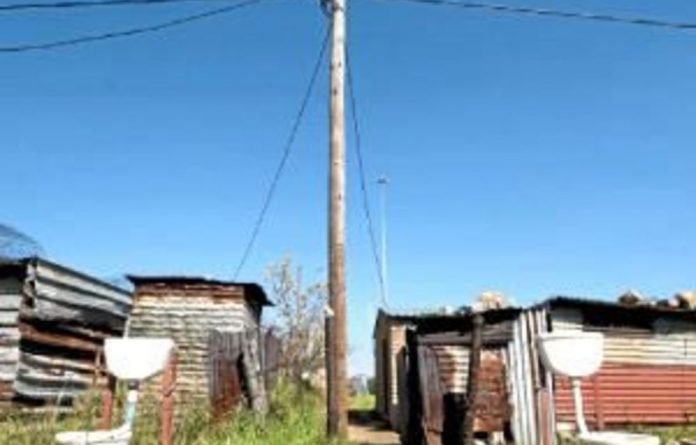 The opposition sees them as electioneering tools. A private company has spotted a marketing opportunity. But for the voter in the street, they are simply “moerse gate” (huge holes) driving them round the bend.

Potholes have featured in many an election speech — the African National Congress (ANC) has promised better service delivery, while the opposition Democratic Alliance warned last year already that the “pothole crisis” was reaching a “tipping point”.

Perhaps that was illustrated by a photograph that appeared in Beeld newspaper on May 4 of a sign erected by a member of the public to warn motorists against massive potholes on the R36 road between Orighstad and Lydenburg in Mpumalanga.

In big, black letters, the warning on the side of the road is short and to the point. It says: “Moerse Gate” (huge holes).

The DA in Gauteng this week said that whenever it started raining in Johannesburg, “everyone thinks about the potholes opening up”. The alliance in Tshwane included fixing potholes within 48 hours of their being discovered as one of its 10 election promises during the launch of its campaign in April.

Several newspapers over the past months have carried reports of citizens rolling up their sleeves and starting to fill the holes themselves — or planting thorn trees in the potholes, which happened in Brandfort in the Free State, in a desperate bid to draw the municipality’s attention.

There is even a group on the social networking site Facebook called “Gatvol vir Potholes” (fed-up with potholes).

Motorists can report potholes in Johannesburg to the Pothole Brigade, which then sends out teams to fix the potholes.

‘Maintaining roads is a basic function’
But Ann Bernstein, who heads the Centre for Development and Enterprise, says instead of this being good news, it is a clear indictment against local government.

“Why should citizens be doing these kinds of things? I think the government should be held responsible and if they don’t do what they are supposed to — and maintaining roads is a pretty basic function — people should vote them out,” says Bernstein, who was part of the team drafting the Dinokeng Scenarios, which mapped out three different possible futures for South Africa.

One of these future scenarios was called “Walk Together”. Its message was that the country could address its critical challenges only if “citizens’ groups, business, labour and broader civil society actively and effectively engage with the state to improve delivery and enforce an accountable government”, according to the Dinokeng Scenarios website.

Dial Direct senior executive Bradley du Chenne says the Pothole Brigade works with the government and if their teams encounter potholes too big to fix, they refer them to the Johannesburg Roads Agency.

“The fact of the matter is if you look at it internationally, local governments are stretched in terms of their budget and demands for infrastructure spend. So this is not a situation unique to our government. I think that more and more we are going to see this model to assist the government.”

Du Chenne says he would recommend such a public-private partnership to companies.

For Dial Direct, the pothole project is not a charity case but a marketing tool.

“It feeds back into our marketing strategy, which is simple, smart solutions … What is important, is that there must be a good fit with your brand and a partnership with you and government. Then it makes sense for local business. Otherwise it will be a case of charity work.”

The Pothole Brigade has repaired about 17 300 potholes in Johannesburg since its launch in August 2010, and 180 000 people have visited the website where potholes can be reported.

But Bernstein says that while she is “delighted” on a personal level that some potholes are being fixed, this is not a permanent solution.

“It doesn’t solve the issue. It’s a band-aid. This is not the function of companies [to maintain roads] … I would rather put money into finding out why the city is unable to run a road department to fix potholes, and come up with recommendations which could sometimes mean firing people.

“We pay taxes for efficient delivery, why should companies have to do this? If the municipality cannot do the job effectively, it can privatise this function,” says Bernstein.

In February, Transport Minister Sbu Ndebele said the government would roll out its s’hamba sonke (walking together) road maintenance programme in a bid to fix potholes.

He acknowledged that South Africa had been investing mainly in road construction without striking the balance between maintenance and construction.

“S’hamba sonke will no doubt arrest the decline of our infrastructure and create thousands of jobs,” Ndebele promised.

The Automobile Association said last year that its own research showed that the number of national and provincial roads in “poor” and “very poor” condition had more than doubled in the last 10 years. The number of roads in “good” and “very good” condition was a third of the figure of 10 years ago.

Sexwale promises action on open toilets
Meanwhile Human Settlements Minister Tokyo Sexwale on Saturday promised tough action against officials and contractors involved in the open toilets sagas that have embarrassed both the ANC and the DA.

“The poor cannot be left in the clutches of unscrupulous elements associated with the erection of such undignified sanitary structures,” he said in a statement.

Sexwale said his ministry would make sure the Cape High Court judgment ordering the DA to enclose toilets in Makhaza in Khayelitsha on the Cape Flats would be enforced.

He also pledged to investigate the ANC’s own open toilet sage in Rammulotsi in the Free State, where the party has begun to enclose the structures in a bid to minimise the damage to its election campaign. – Sapa