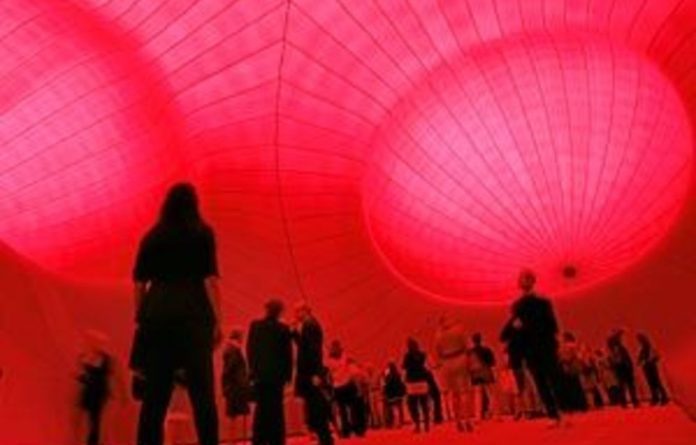 Anish Kapoor this week dedicated his largest artwork ever — an enormous cathedral-like space made from inflated PVC — to the missing Chinese artist, Ai Weiwei.

The sculptor called for a worldwide day of action on which museums and galleries should close in sympathy for the plight of his fellow artist. “Why not?” he asked.

Ai, whose sunflower seeds work in Tate Modern’s Turbine Hall closed at the weekend, has been missing for about a month. He is believed to be in the hands of the Chinese authorities. He had not been heard from or charged with any offence.

“I’ve never met Ai Weiwei but he’s a colleague, an artist,” said Kapoor. “In a very simple way he is heroically recording human existence. All he’s done is to record death by administration, death by corruption, inefficiency. I don’t even think he’s pointing that sharp a finger, frankly.”

Terror of a space
Kapoor was speaking at the opening of the Monumenta exhibition in Paris’s Grand Palais, a commission similar to the Turbine Hall in that it is filling a vast space, this time with the added trickiness of having glass windows all around.

“This is a terror of a space, probably much more difficult than the Turbine Hall,” Kapoor said. “It’s three times the size, huge horizontally and vertically and, above all, the light is a killer. It’s almost brighter than it is outside.”

He has called the 35-metre high work — inflated, it covers 13 500 square metres– Leviathan.

Visitors first of all walk inside it, like going into the belly of a whale or a cathedral, and three chambers lead off it. From the outside you see what it really is — four connected balloon-type structures; something from a science fiction film, perhaps, that has taken refuge in this grand 19th-century glass building on the Seine.

Kapoor and his team had spent the past week inflating the work and there was no trial run. “We had one shot,” he said. “Doing a project like this is about taking a risk.”

The work will stay up until June 23 before it is gently deflated like a bouncy castle at the end of a fair — a very big castle with absolutely no bouncing allowed. The PVC alone weighs 18 tons and will be folded up into three parcels when it is let down — a 90-minute process.

Kapoor is known for his supersize works, from the trumpet-like Marsyas at Tate Modern in 2002 to Temenos, his net-like sculpture in Middlesbrough. It is an impressive piece of design and engineering. “It is a perfect bit of tailoring,” said Kapoor. “A millimetre out and there are wrinkles and wrinkles aren’t allowed.”

The work is also pan-European. The initial computer work was done in England and the PVC was cut in Germany, assembled in Italy and set up by a Czech crew in Paris. Kapoor is the fourth artist to take on the Monumenta commission, following Anselm Kiefer, Richard Serra and Christian Boltanski.

Dedicating the work to Ai reflects mounting concern for the artist and continuing pressure on the Chinese authorities to explain why he is missing. —