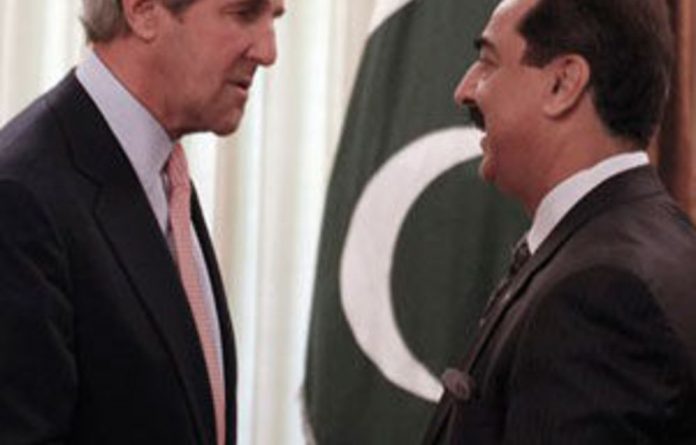 Pakistan and the United States on Monday sought to smooth a damaging row caused by Osama bin Laden’s killing, hailing each other as partners with US Secretary of State Hillary Clinton poised to visit.

Pakistan’s civilian and military leaders were left angry and embarrassed over a unilateral US raid that discovered and killed al-Qaeda’s chief living, possibly for years, two hours’ drive from the Pakistani capital on May 2.

It rocked the country’s seemingly powerful security establishment, with its intelligence services and military widely accused of incompetence or complicity over the presence of Bin Laden in a suburban house in the city of Abbottabad.

Al-Qaeda leader Osama bin Laden has been killed in a firefight with US forces in Pakistan ending a nearly 10-year worldwide hunt for the mastermind of the September 11 attacks. Watch our slideshow.

Pakistan’s Parliament demanded no repeat of the raid, although US President Barack Obama has reserved the right to act again, and Islamabad insisted US drone strikes targeting Taliban and al-Qaeda leaders on its territory must end.

The military threatened to review intelligence cooperation with the US, and Islamabad — a key Washington ally on the “war on terror” — called the raid “unauthorised unilateral action”.

Pakistan said on Monday the allies — whose ties are frequently tense — would work together on future high-value targets.

‘Grave concerns’
US Senator John Kerry flew into the row as the most senior American official to visit the nuclear-armed country since the raid, as US lawmakers demand a review of billions in aid money to Pakistan that he has personally helped secure.

Kerry said he held “constructive conversations” with Pakistan’s leaders but reiterated “grave concerns” over the presence in Pakistan of the al-Qaeda terror chief and sanctuaries of US adversaries in Afghanistan.

In a televised address, he said he had come with Obama’s backing “to find a way to rebuild the trust between our two countries”, having earlier warned of profound consequences if the allies cannot fix their fractured ties.

The US depends on Pakistani logistical and military support to fight the Taliban in neighbouring Afghanistan.

Cash-strapped Pakistan has depended on $18-billion from the US since the September 11 2001 attacks, when Pakistan officially ended support for Afghanistan’s Taliban and agreed to work with Washington.

“We must never lose sight of this essential fact. We are strategic partners with a common enemy in terrorism and extremism,” said Kerry.

“Both of our countries have sacrificed … so much that it just wouldn’t make sense to see this relationship broken or abandoned,” he added.

Kerry said Pakistan had “recommitted to find more ways to work against the common threat of terrorism” and to increase cooperation on intelligence sharing and operations to “defeat the enemies that we face”.

He said two senior US government officials will arrive in Islamabad later this week to work on the details of implementing “these initial steps”, and that Clinton “will soon announce plans to visit Pakistan to develop new trust”.

“It was the need of the hour that Pakistan and US should rebuild the trust and confidence between their governments and institutions,” his office said in a statement released after his talks with Kerry.

The US senator initially met Pakistan’s powerful army chief of staff General Ashfaq Kayani, who briefed him about the “intense feelings” within the army over the raid, the military said.

There have been heightened security fears in Pakistan since the Bin Laden killing, and the killing of a Saudi diplomat in a hail of gunfire on Monday was the second attack on Saudi interests in Karachi in less than a week.

Pakistani police told Agence France-Presse that the Saudi had been driving a vehicle with diplomatic plates when two motorcycle riders opened fire at a crossroads in the city’s upmarket Defence neighbourhood.

Last Wednesday, drive-by assailants threw two grenades at the consulate in Karachi in what officials said could have been a reaction to Bin Laden’s death.

Before travelling to Pakistan, Kerry told reporters in the Afghan capital, Kabul, that US ties with Islamabad were at a “critical moment”.

“We need to find a way to march forward if it is possible. If it is not possible, there are a set of downside consequences that can be profound,” said Kerry, whose trip to the region has been endorsed by Obama.

He said the discovery of the al-Qaeda chief living close to Islamabad meant talks had to “resolve some very serious issues”. — AFP