Japan slides back into recession after quake 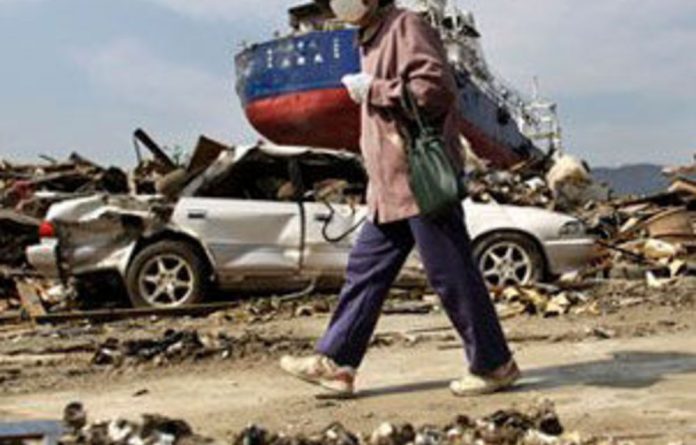 Japan’s economy plunged back into recession in January to March, contracting sharply on the impact of the nation’s biggest recorded earthquake, a tsunami and a nuclear crisis, data showed on Thursday.

Gross domestic product fell 0,9% in the first quarter compared with the previous three months, and marked the second consecutive quarter of contraction, which economists define as a technical recession.

The drop was equivalent to a 3,7% fall on an annualised basis.

In the aftermath of the disasters, industrial output saw its biggest ever fall and spending plunged as consumer and business confidence took a tumble.

Many analysts see the downturn worsening in the April-to-June quarter, as nationwide supply chain problems in the wake of the quake continue to disrupt production and the threat of power supply disruption prevails.

“The economy was weak before the Great East Japan Earthquake struck on March 11 and the full impact of that catastrophe has only just begun to be reflected in the GDP data,” noted Capital Economics.

The fall in annualised terms was nearly double the 2% drop forecast in a Dow Jones Newswires poll of analysts and was the first successive contraction since the global financial crisis.

“The Japanese economy is expected to remain weak for the time being,” Economy Minister Kauro Yosano told reporters, adding that a third straight contraction in April to June was likely.

However, he stressed Japan’s plight was temporary given the difference between the impact of the earthquake and the financial crisis, which sapped overseas demand.

Japan’s economy contracted for four straight quarters during the downturn and remains mired in deflation as falling prices encourage consumers to hold off purchases.

‘Totally different’
“The situation is totally different from the time in the wake of Lehman Brothers’s collapse. The Japanese economy is seen to be strong enough to show resilience,” he said, adding the decline “is not due to sluggish overseas demand”.

Yosano said he expected Japan to grow nearly 1% in the current fiscal year.

The January-to-March contraction was the worst slippage since a record 18,3% tumble in January to March 2009.

Private consumption, which accounts for nearly two-thirds of the economy, was down 0,6%. Japan adopted a mentality of self-restraint in the aftermath of the disasters, which is slowly easing.

Data earlier this week showed consumer sentiment plunging by its steepest measure on record in April.

The 9,0-magnitude earthquake and a devastating tsunami has left about 25 000 dead or missing, and with a subsequent emergency at the Fukushima Daiichi nuclear plant, it plunged Japan into its worst post-war crisis.

Many of Japan’s biggest companies saw profits tumble in the quarter and have been unable to offer forecasts due to the scale of the disaster’s impact on production and sales.

Before the disasters, analysts had predicted that the nation’s economy would return to growth in the first quarter on rising overseas demand. — AFP