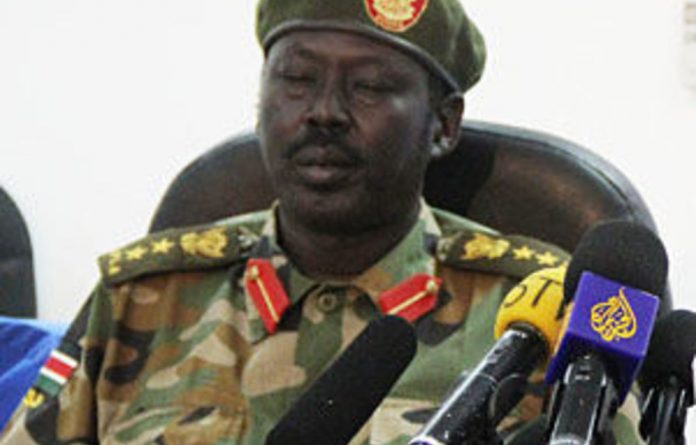 Sudan’s flashpoint town of Abyei was ablaze on Monday with gunmen looting properties after its capture by northern troops, the United Nations said after demanding Khartoum pull out its forces.

The UN Mission in Sudan, or Unmis, warned Khartoum it was responsible for law and order amid reports that thousands of civilians were fleeing southwards after northern Sudan Armed Forces troops and tanks overran the border town on Saturday.

“Unmis strongly condemns the burning and looting currently being perpetrated by armed elements in Abyei town,” it said in a statement.

Soon-to-be independent south Sudan also claims the Abyei district, which has a special status under a 2005 peace deal that ended 22 years of civil war, and has called the occupation “illegal”.

Abyei’s seizure, coming in the run-up to international recognition of southern independence in July, has been condemned by the world powers as a threat to peace between north and south Sudan.

A UN Security Council delegation headed on Monday to Juba for talks with southern President Salva Kiir, after saying they were “very, very concerned about the rapidly deteriorating situation in Abyei” and calling on Khartoum to pull out its forces.

“The members of the Security Council call upon the government of Sudan to halt its military operation and to withdraw immediately from Abyei town and its environs,” the French ambassador to the United Nations, Gerard Araud, told a joint news conference in Khartoum with his Russian and US counterparts on Sunday.

“At this very moment, Sudan stands ominously close to the precipice of war,” said Kerry, who chairs the influential Foreign Relations Committee.

“The north must leave, this cannot be allowed,” said demonstrator Choul Deng, who comes originally from the region on the north-south border.

“The north are acting like they did during the days of the civil war, bombing and attacking our people.”

Waving banners and shouting slogans, more than 100 demonstrators marched through the streets of Juba, starting at the grave of the late rebel leader John Garang, who led the south during the civil war with the north.

“People are suffering,” said Charles Deng, a student. “Their homes are being destroyed by the tanks of the north.”

Abyei was granted a special status under the 2005 Comprehensive Peace Agreement that ended the 22-year civil war, and requires both sides to keep their troops out until a vote to determine its future.

The fighting has soured the mood in the southern capital, Juba.

“We fear that this can lead to something bigger, back to war,” said businesswoman Mary Okech.

However, southern officials have vowed it will not impact the south’s independence, due in less than two months.

“The independence day for the Republic of South Sudan will go ahead on July 9 2011 — you cannot postpone the birth of a baby,” southern Information Minister Barnaba Marial Benjamin told reporters on Sunday.

“We assure our citizens to be calm, and see what they can do in raising relief so that they can help their brothers and sisters in Abyei.”

Fork in the road
Activists have warned of the severity of the situation.

“We always talk about proverbial forks in the road,” said John Prendergast, co-founder of the US-based Enough Project campaign group. “This is a real one between war and peace between the north and south,” he said.

Prendergast, whose satellite project — backed by Hollywood star George Clooney — monitored a troop build-up in the Abyei area in the weeks before the fighting, warned any deal to resolve the conflict must put pressure on leaders rather than offer incentives.

“The longer the US and UN Security Council continue to focus solely on incentives, and not deploy any consequences for violating agreements and attacking civilian targets, the greater the chances that this will escalate to full-scale national war,” he warned.

Abyei was due to vote on its future in January alongside a referendum on independence for the south, which delivered a landslide for secession.

However, the plebiscite was postponed indefinitely as the north and south disagreed on who should be eligible to vote in an area where conflicted loyalties and land disputes keep tensions high. — AFP