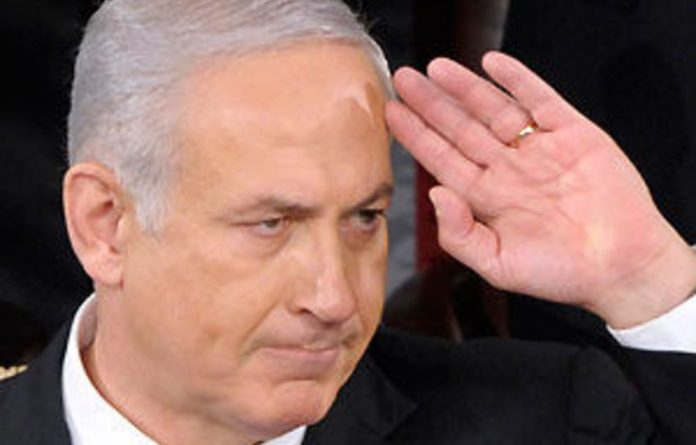 Israeli Prime Minister Benjamin Netanyahu told the US Congress on Tuesday that he would uproot settlements in a “generous” peace deal with Palestinians, but ruled out international demands to return to the 1967 borders or share Jerusalem.

In what had been hailed as a landmark speech, the Israeli leader broke no substantial new ground in his positions and rejected key calls from US President Barack Obama and the international community, who have been looking for ways to revive the comatose peace process with the Palestinians.

Netanyahu also ruled out any return to talks as long as the unity deal between Palestinian president Mahmud Abbas and Hamas continues, while saying the real stumbling block to peace was the refusal of the Palestinians to recognise Israel as a Jewish state.

“In any peace agreement that ends the conflict, some settlements will end up beyond Israel’s borders,” Netanyahu said in a rare speech to a joint meeting of Congress, saying he had to be “honest” with the Israeli public.

“We will be very generous on the size of a future Palestinian state,” he said in a speech frequently punctuated by warm applause and several standing ovations from the US lawmakers.

No return to 1967 borders
But Netanyahu again ruled out any return to the borders that existed before the 1967 Middle East War or dividing the holy city of Jerusalem. The Palestinians demand east Jerusalem as the capital of their future state.

The issue of accepting the 1967 borders basis as a starting point for negotiations has been at the core of an ongoing row between Netanyahu and Obama.

Obama last week gave public voice to the long-held view of the US and the international community that a Palestinian state should be created based on the borders that existed before the 1967 Six Day War.

Such a state would include the Gaza Strip, the occupied West Bank and mostly Arab but Israel-annexed east Jerusalem, with some adjustments and land swaps so that Israel can maintain settlement blocs.

No compromise on refugees
On Tuesday Netanyahu again rejected these calls, saying Israel would not give up its main settlement blocs or compromise on the issue of Palestinian refugees.

“The border will be different than the one that existed on June 4, 1967. Israel will not return to the indefensible lines of 1967,” he said.

“Any peace deal must take into account the dramatic demographic changes that have occurred since 1967. The vast majority of the 650 000 Israelis who live beyond the 1967 lines reside in neighborhoods and suburbs of Jerusalem and greater Tel Aviv.”

As such, Netanyahu’s positions are unlikely to entice the Palestinians back to the negotiating table or persuade them to abandon attempts to seek recognition for a Palestinian state when the UN General Assembly meets in September.

‘Nothing new’
In a swift reaction, a Palestinian official said there was “nothing new” in Netanyahu’s speech, saying the Israeli leader was just “adding obstacles” on the road to peace.

A far-reaching Israeli initiative has been seen as the only way of heading off a Palestinian attempt to unilaterally secure recognition of statehood.

The Israeli leader also called on the international community to foil this bid.

“Peace can be achieved only around the negotiating table. The Palestinian attempt to impose a settlement through the United Nations will not bring peace. It should be forcefully opposed by all those who want to see this conflict end,” he said.

But he also ruled out any negotiations until Abbas severs ties with Hamas.

“Israel is prepared to sit down today and negotiate peace with the Palestinian Authority. I believe we can fashion a brilliant future of peace for our children. But Israel will not negotiate with a Palestinian government backed by the Palestinian version of al-Qaeda.”

Recognition
And he blamed the Palestinians for the failure to reach a peace deal over the last two decades, saying they were loath to recognise Israel as a Jewish state.

“President Abbas must do what I have done. I stood before my people, and I told you it wasn’t easy for me, and I said ‘I will accept a Palestinian state’,” Netanyahu said.

“It is time for President Abbas to stand before his people and say: ‘I will accept a Jewish state’,” Netanyahu said. “Those six words will change history.” — AFP