Ousted Egypt leader Hosni Mubarak to be put on trial 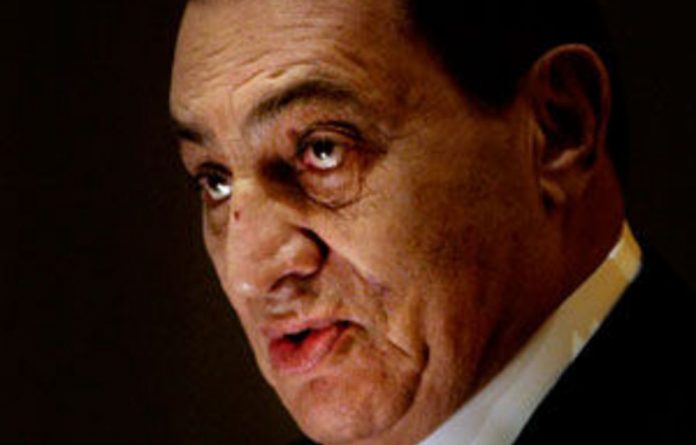 Deposed Egyptian president Hosni Mubarak and his two sons were on Tuesday referred to a criminal court on suspicion of graft and ordering deadly fire against anti-government protesters, state media reported.

The official Mena news agency said the 83-year-old former strongman and his two sons Alaa and Gamal have been charged with “premeditated murder of some participants in the peaceful protests of the January 25 revolution”.

They have also been charged with profiteering and using their positions for illicit gains and squandering public funds, it added.

Several of the charges extend to a fourth defendant, Hussein Salem, a businessman close to Mubarak who has been blamed for a controversial deal to supply Israel with gas at lower than usual prices. He has fled the country.

Police custody
Mubarak, who was forced to resign on February 11 in the face of 18 straight days of mass protests, has been in police custody in hospital since April 13 in the Red Sea resort of Sharm el-Sheikh.

The veteran leader, who ruled Egypt for three decades, was hospitalised after reportedly suffering a heart attack during questioning.

They “incited some officers and policemen to shoot the victims and run them over with vehicles”.

An official inquiry found that at least 846 people were killed in the protests, many of them from gunshot wounds. Mubarak’s security chief Habib al-Adli has already been sentenced to 12 years in jail for corruption and faces another trial on charges of ordering the shootings of demonstrators.

The public prosecutor had ordered Mubarak’s transfer to a hospital in Cairo’s Tora prison, where his two sons are imprisoned.

Mubarak & Sons
Alaa, Mubarak’s elder son, is believed to have used his position to gain a foothold in many businesses but he stayed out of politics, unlike the younger Gamal, who was widely seen as the heir apparent.

Gamal, 47, was an investment banker who rose in the former ruling party’s ranks in the past decade to head the powerful policies committee.

Gamal had reportedly taken a hawkish stance during the protests against his father’s rule, urging the president to crack down.

The belief that Gamal was being groomed to succeed his father was a main grievance of protesters who took to the streets starting on January 25 to demand Mubarak’s overthrow.

The spectacular demise of one of the region’s most powerful leaders, and a key US and Israeli ally, did not end protests by tens of thousands of Egyptians, who continued to demand that the former leader be put on trial.

Deadly clashes
The demonstrations throughout March and April placed immense pressure on the military, which assumed power after Mubarak’s resignation, and led to a deadly clash with soldiers when they tried to clear an overnight protest in April.

Mubarak himself has denied any wrongdoing in an audio tape broadcast on an Arabic-language television station in April.

His lawyer, Farid al-Deeb, said he had no immediate comment.

Several former regime officials are already facing trial for corruption or violence during the revolt.

Mubarak’s wife Suzanne was released on bail this month after she returned assets to the government. She is suspected of corruption. — AFP