US says ‘time is working against Gaddafi’ 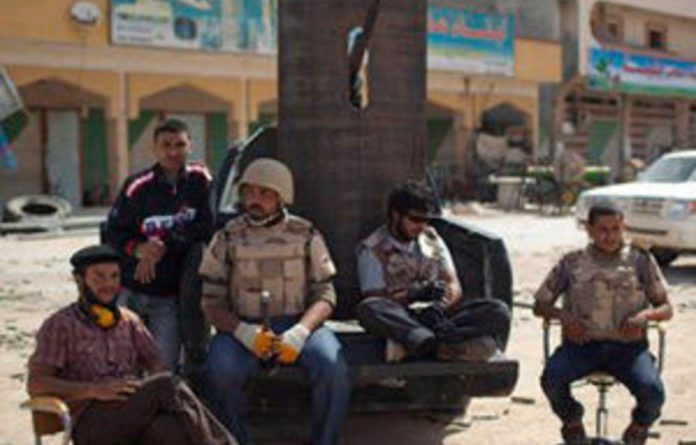 Nato warplanes hammered Tripoli on Tuesday with some of their heaviest air strikes yet after the United States said Libyan leader Muammar Gaddafi would “inevitably” be forced from power.

He said the strikes had targeted a compound of the Popular Guards, a tribally-based military detachment. But he said the compound had been emptied of people and “useful material” in anticipation of an attack, and the casualties were people living in the vicinity.

“This is another night of bombing and killing by Nato,” Ibrahim told reporters.

Led by France, Britain and the United States, Nato warplanes have been bombing Libya for more than two months since the United Nations authorised “all necessary measures” to protect civilians from Gaddafi’s forces in the country’s civil war.

“We have degraded his war machine and prevented a humanitarian catastrophe. And we will continue to enforce the UN resolutions with our allies until they are completely complied with,” US President Barack Obama and British Prime Minister David Cameron wrote in the Times newspaper.

UN Security Council 1973, passed on March 17, established a no-fly zone and called for a ceasefire, an end to attacks on civilians, respect for human rights and efforts to meet Libyans’ aspirations.

In upbeat comments, US Secretary of State Hillary Clinton told a news conference in London on Monday: “We do believe that time is working against Gaddafi, that he cannot re-establish control over the country.”

She said the opposition had organised a legitimate and credible interim council that was committed to democracy.

“Their military forces are improving and when Gaddafi inevitably leaves, a new Libya stands ready to move forward,” she said. “We have a lot of confidence in what our joint efforts are producing.”

Conflict deadlocked
Rebels trying to overthrow Gaddafi’s 41-year rule control the east of the oil-producing country, but the conflict has been deadlocked for weeks.

In an escalation that could help break the stalemate, French officials said on Monday that France and Britain would deploy attack helicopters, a step aimed at targeting Gaddafi’s forces more precisely.

“What we want is to better tailor our ability to strike on the ground with ways that allow more accurate hits,” French Foreign Minister Alain Juppé said.

But the use of helicopters carries risks for Nato, as they would fly lower than warplanes and be more exposed to ground fire. The downing of helicopters could draw ground forces into rescue efforts.

Reporters, whose movements are tightly controlled by the Libyan authorities, were taken to visit Tripoli’s central hospital after the heavy night raids.

They were shown the corpses of three men with grave head injuries, their bodies laid out on gurneys.

A man who identified himself only as Hatim, who had deep gashes and abrasions on his arms and legs, said the force of the blasts had caved in part of his residence near the military compound.

“We were in the house and then, wham, the ceiling came down, right on me,” he said.

Smaller blasts were heard intermittently for several minutes after the final round of strikes, which shook windows and brought plaster down from ceilings in the Tripoli hotel where foreign reporters are staying. – Reuters