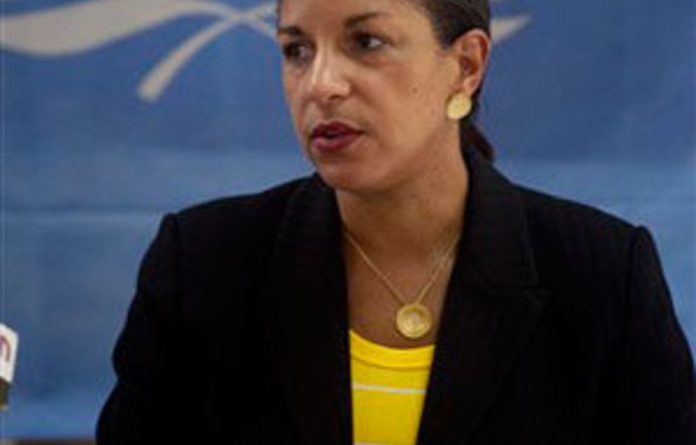 “These images provide supporting documentary evidence of war crimes and crimes against humanity in Abyei,” said John Bradshaw, director of the Enough Project campaign group, part of the coalition backing the satellite work.

United States ambassador to the United Nations Susan Rice warned of the “grave humanitarian consequences” of the seizure of Abyei town by Khartoum troops as she and other Security Council delegates held talks in the southern regional capital Juba on Tuesday.

Rice said there were “horrific reports of looting and burning”.

However, the Sudanese president later gave a “green light” to northern Sudan Armed Forces (SAF) to “respond to any violations” by southern forces, the official Suna news agency said late on Tuesday.

In a defiant speech in Khartoum, al-Bashir scoffed at warnings from Washington to withdraw its forces or risk jeopardising lucrative US efforts to normalise ties.

“Sudan is not greedy for the carrot of America, and does not fear from its stick,” al-Bashir was quoted as saying.

The Satellite Sentinel Project, which obtained and analysed the images, said they showed “evidence of attacks by armoured vehicles and the destruction of villages”.

Its images showing a “build-up of tanks, helicopters, infrastructure improvements, troop strength and deployment of forces along main roads within striking range of Abyei, indicate that the invasion of Abyei was premeditated and well-planned”, the group added in a statement.

Fired upon
Four UN helicopters were fired upon in the flashpoint Abyei region on Tuesday, according to a UN security report seen by Agence France-Presse on Wednesday.

The helicopters, from the UN Mission in Sudan (Unmis), were not hit in the shooting, which took place as they left the peacekeepers’ fortified compound in Abyei town.

“Approximately 14 rounds were believed fired from various positions close to the Unmis compound,” the report read.

“The helicopters, with only crew on board, took no hits and landed safely.”

Abyei, a fertile border district claimed by both north and south, was due to vote on its future in January alongside a referendum on independence for the south, which delivered a landslide for secession.

But Abyei’s plebiscite did not happen amid arguments as to who was eligible to vote. On Saturday northern troops and tanks overran the contested area.

The southern government has demanded that northern troops withdraw immediately.

The Satellite Sentinel Project, which provided the images, was set up by Hollywood star and rights activist George Clooney last year.

Threat to peace
The north’s seizure of Abyei, in the run-up to international recognition of southern independence in July, has been condemned by the world powers as a threat to peace between north and south.

While al-Bashir said he wanted to extend a “hand of peace to the south”, he also repeated warnings that southerners in the north must leave after the south’s independence on 9 July.

More than 290 000 southerners in the north have returned to the south since October, the UN says, but some estimates suggest that as many as 500 000 still remain in the north where they fled during Sudan’s 22-year civil war. — AFP

International crimes must be prosecuted and domestic jurisdictions are well placed to do this. Domestic prosecutions based on universal jurisdiction are on the rise
Read more
World

Between 2015 and the end of 2017, South Africa transferred $62-million worth of major conventional weapons to the UAE
Read more
Africa

The commission will hold witness hearings into Yahya Jammeh's 22-year era of oppression, opening the way to prosecuting those responsible
Read more
Africa