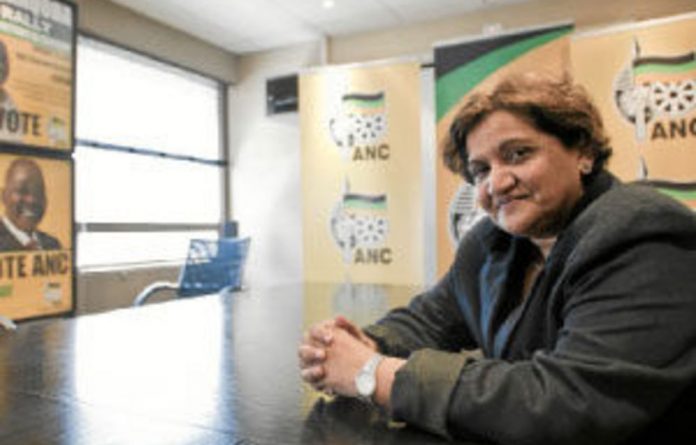 The ANC’s priority prior to the national elections in three years’ time will be to claw back the minority vote, following its election setback in those communities, ANC elections chief Jessie Duarte said this week.

Duarte said that the ANC’s losses in white, Indian and coloured communities accounted for the party’s overall drop from 65.9% of the vote to 61.95%. She said that the ANC had drawn up a two-pronged strategy for the 2014 elections: winning back the support of minority communities and achieving more positive coverage in the press.

“We’re worried about the growing divisions in the country. We never had great voting margins in the coloured and Indian communities and we knew the Democratic Alliance would make inroads. But we must ask ourselves: what went wrong, what happened to our relationship with those communities? Clearly we have not overcome their feelings of marginalisation,” she said. “The ANC has disappeared from these communities. We have to rebuild branches to use as a base.”

In a post-election analysis released this week the Institute for Democracy in Africa (Idasa) found that the higher-than-expected voter turnout of 57% favoured the DA, which picked up most of its new votes in minority communities. “A higher turnout within the opposition’s traditional support base [read: minority communities] buoyed its overall proportional share of electoral support,” according to the Idasa document, compiled by ­analysts Justin Sylvester and Sithembile Mbete.

During the elections ANC secretary general Gwede Mantashe declared that the media were the ANC’s major opposition in South Africa, but Duarte took a more considered view. “The ANC has to make positive news. The South African media will continue to ignore the fact that 97% of houses have water, and focus on the 3%. But we must tell that story ourselves. We have to make the news,” she said.

In its post-election analysis the ANC found that it had a good grassroots campaign, which touched voters directly, but that work was needed on its “aerial” (media) exposure. “We increased our door-to-door work, but people are influenced by the media,” Duarte said.

At a press conference this week Mantashe admitted that comments by ANC Youth League president Julius Malema about minority communities might have influenced the vote. “People would be switched off by comments they feel are racist, but we are all still too oversensitive,” he told reporters.

Political analyst Susan Booysen said racial minorities in South Africa were less politically attached and “migrated” more easily and that offensive comments, therefore, had an effect. “Coloured communities are notorious for their migration. So the weak support that the ANC has anyway gets further weakened by those kinds of comments.”

The ANC’s work in the Western Cape revealed that job creation was a key issue, to a greater extent than in other areas. “For [coloured communities] it is about getting jobs. It is a serious issue for them that there has to be access to economic empowerment.” Local dynamics also played a role in the ANC’s declining support in coloured communities, Duarte said.

“In Hessequa there is a tribe which we maybe have not acknowledged as much as we acknowledged other tribes. In Port Elizabeth we had to do deep door-to-door work because we knew there was trouble there with the list processes. And in the Southern Cape the provision of fishing licences played a role, but [Agriculture Minister] Tina Joemat-Pettersson is going to look at that.” Campaigning in white communities was hampered by gated estates and unanswered doorbells, she said.

“But we set up call centres in Luthuli House, Cape Town and KwaZulu-Natal and we phoned those communities. And they engaged us: about street lighting and, here in Johannesburg, about billing issues.” In the Western Cape the ANC received 117 000 more votes than it did in 2009, so Duarte sees hope for the future. “The Western Cape ANC has a three-year plan and it seems to be starting to work. We received 93% of the African vote in the townships.”

The ANC has a chance of winning back the minority vote, Booysen believes, because, historically, voting has been unpredictable and volatile. According the Council for Industrial and Scientific Research, the DA took only 2.6% of the ANC vote and that came mainly from minority communities. Said Booysen: “The ANC’s core is solid.”