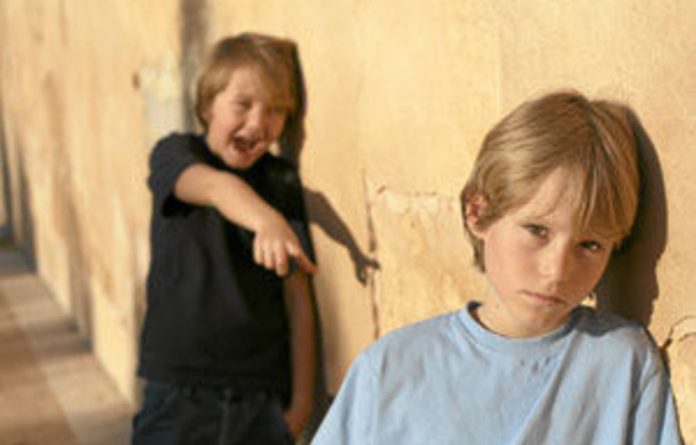 “The bullying started at the end of my grade six year,” he says. “They [fellow learners] began calling me names and making nasty comments about me. I felt bad. They never hit or pushed me; they just said things that were mean.

“It got worse when I was in grade seven. A group of boys in my class would always do these things where teachers couldn’t see them. I would be walking from one class to another and they would make comments about my mother behind me in the line.

“They always seemed to pick on me. I tried to avoid them, to ignore them, but that didn’t seem to help. I eventually told my mother. She told the teachers. They got all of the learners together and told them to stop. They made them write letters to apologise to me.

“The bullying stopped for about a month. But then they started again. I wasn’t scared but irritated. I had made new friends, but the bullies kept following me. I just tried to ignore them but I was losing self-confidence and was unhappy. The teachers didn’t seem to care. One of the boys in the group phoned me at home and told me how sorry he was about the whole thing. But the others just kept coming after me.

“Eventually, I told my parents that I did not want to go to school. After many discussions, my parents took me out of school and I completed grade seven at home.” Nearly everyone is bullied at some time of their lives by brothers and sisters, by neighbours, by children at school or even by adults.

Paul’s story reminds us that children who are bullied feel scared, vulnerable and very alone. Bullying includes people calling children names, making things up to get them into trouble, pinching, hitting, biting or pushing and shoving. It also includes damaging a child’s belongings, stealing their money or food or taking friends away from them.

Bullies are cunning and often do things in an underhanded way so that they are not noticed. Hundreds of academic studies have shown that both primary and high school learners are bullied, and that bullying is a worldwide problem that can have an adverse effect on school climates and negative lifelong consequences for learners. There was an extraordinary rise in interest in the subject of bullying in the last decade of the 20th century with many researchers trying to understand this problem.

The following points summarise the current research knowledge on bullying:

Bullying can happen at any time, but it tends to happen in classrooms that are very full or on buses that are crammed. Children might feel uncomfortable and irritable on a very hot day or miserable because they can’t go out and play on a wet day. Watching too much violence on television or video could spark off bullying behaviour as well.

Most incidents of bullying take place in front of other learners because bullies need an audience. The learners watching can encourage the bullying behaviour just by being there. Schools can discourage learners from just watching or being bystanders.

Thandi’s story
Thandi is a grade eight learner at a big school in Mitchell’s Plain. She uses a bus to get to school daily and does not always enjoy the trip. “Some girls at the back of the bus started calling me names. When I turned around, they stopped. I ignored it for a while. Then my friends stopped sitting next to me. Maybe they were also scared of being called names, I don’t know. “I hated getting on to the bus.

Then one day I just decided to stand up for myself. I went to the back of the bus and told them how they made me feel. It worked! They were embarrassed and apologised. I didn’t think it would be that easy. Being assertive in this situation helped me to deal with bullying. I was able to stand up for myself without putting the other person down. I said: ‘I feel bad when you call me names and I don’t like it when you pick on me. I want you to stop.’ If I had said: ‘You’d better stop that!’ I might have had a fight on my hands. The bullies were not sure how to deal with my statements and backed off.”

Mark Potterton is the author of the book Beat Bullying: A Practical Guide for Schools

‘I was bullied and I still carry the scars’