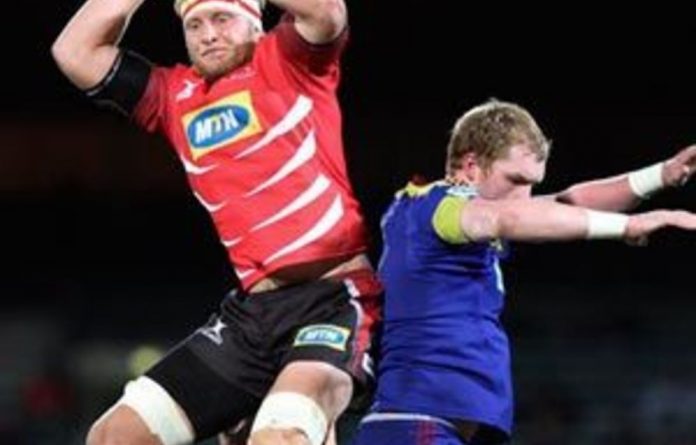 Wikus van Heerden scored a try a minute from fulltime to give South Africa’s Lions a 26-22 win over the Otago Highlanders in Super 15 rugby on Saturday.

Former Springboks’ flanker van Heerden, swathed in bandages and streaming blood from a head wound, drove through the Highlanders’ defense in the 79th minute to give the Johannesburg-based Lions their third win of the season and severely damage Otago’s playoff hopes.

Highlanders flyhalf Lima Sopoaga had kicked his team to the brink of victory, landing a conversion and five penalties for 17 points, but he missed touch from a late defensive penalty, allowing the Lions to mount the raid from which the winning try was scored.

Sopoaga had fought a kicking duel with his young flyhalf rival Elton Jantjies throughout the match and seemed to have gained the upper hand when his fifth penalty in the 67th minute gave the Highlanders a 22-19 lead.

Otago started the match in sixth place on the championship table, looking for its ninth win from 13 games which would cement its place among the top-six teams which will contest the playoffs in four weeks.

Instead, it fell to a fifth defeat which may cause it to tumble out of the top six and could harm its playoff chances. Otago has matches remaining against the Western Force, New South Wales Waratahs and Auckland Blues.

The Lions played with enormous spirit to post the second win of their four-match tour of Australia and New Zealand, which concludes when they play the Wellington Hurricanes next weekend. They trailed for large parts of the game, were behind 16-9 at halftime and by three points with a minute remaining but they showed patience and resilience to claim a last-gasp win.

“I’ve played for the Lions for a long time and I can’t remember us winning in New Zealand ever so it’s a big occasion for us,” Lions captain Doppies La Grange said.

“Some hard work has paid off. The guys showed a lot of attitude and played with heart. It’s an awesome feeling. We gave away some silly penalties but against the Highlanders it’s always a physical battle and you have to work hard to come out with a win.”

La Grange said the hard-working van Heerden and the composed, young Jantjies had been inspirational figures.

The Highlanders should have clinched the match well before the final minute when van Heerden’s try became decisive. They had many opportunities but their play lost some of its usual coordination and authority.

New Zealand referee Jonathan White fired penalties randomly at breakdowns, mostly against the Lions, and his rulings led to frustration and occasional flare-ups between forward packs.

The Highlanders had worked hard, without absolute control, to carve out a 16-9 lead by halftime with a crucial try to center Shaun Treeby. The Lions hit back with a second half try to backrower Joshua Strauss, leaving it level at 16-16 after 49 minutes.

Jantjies and Sopoaga exchanged penalties until the 79th minute when Sopoaga’s missed touch gave the Lions the chance to rally and build toward the winning try.

“That’s rugby, mate. You’ve got to find touch, you’ve got to hold onto the ball and we didn’t do any of that tonight,” Highlanders captain Jamie Mackintosh said.

“We were in a great position to make a run through [to the playoffs] but we’ve hit a banana skin and it’s really disappointing.”