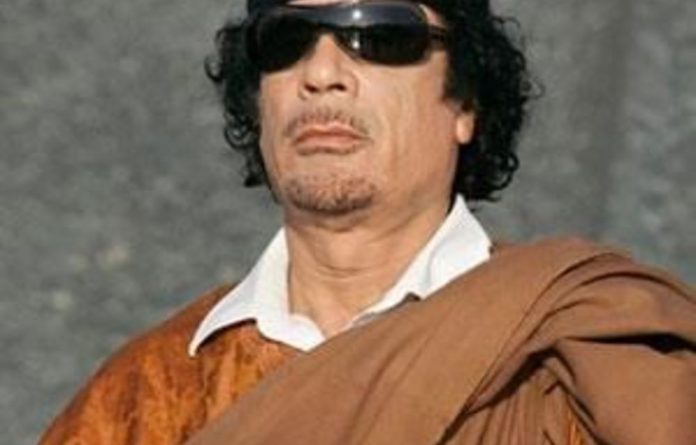 The African National Congress on Sunday slammed the bombing of Libya, in a statement on the eve of a visit by President Jacob Zuma to Tripoli for talks with Muammar Gaddafi.

Zuma is scheduled to meet Gaddafi on Monday, amid intensified Nato strikes on the embattled Libyan leader’s regime, as part of an African push to end the conflict, with sources saying the talks would focus on an exit plan.

The ANC said it supports African Union (AU) efforts to peacefully resolve the unrest “through negotiations by all parties involved in the conflict” in the uprising against Gaddafi’s regime.

“We also join the continent and all peace loving people of the world in condemning the continuing aerial bombardments of Libya by Western forces,” it said in a statement after a two-day meeting of its national executive council.

Zuma’s spokesperson insisted this was misleading and that the talks would be part of AU efforts for Libya to adopt “the political reforms necessary for the elimination of the causes of the current crisis”.

Gaddafi has told confidantes that it would betray the memory of his son to surrender power, and instead wants to assume a background role while civil institutions are allowed to emerge from his four-decade rule.

However, Britain and France, which are spearheading the strikes on Libya, have insisted Gaddafi leave, paving the way for the Benghazi-based Transitional National Council (TNC) to hold elections. The other members of the G8, Canada, Germany, Italy, Japan, Russia and the US, also called on Friday for Gaddafi to step down.

No political future in Libya
Moustafa Adul Jalil, chairperson of the TNC in Benghazi, said: “The only condition for holding talks of resolving the crisis is that Gaddafi, his inner circle and his family have no future in the political arena of Libya and they must leave. We only welcome the proposition regarding the ceasefire and peace settlement based on this condition.”

The arrival of attack helicopters off the Libyan coast has left Gaddafi loyalists fearing an onslaught on ground forces that could clear the way for rebels in central Libya to advance on the capital.

The helicopters are expected to first be deployed on the outskirts of Misrata, which has been the scene of the most protracted and vicious fighting over the past three months.

Repeat Nato bombing raids have cleared the way for an untrained rebel army to seize most of Misrata. However, Gaddafi’s forces remain on the western outskirts of the city, from where they are still shelling rebel positions to the east.

Nato jets have so far limited their targets to Libyan government armour, radar installations, navy ships and sites they have identified as command and control centres used to direct attacks.

The six-hour journey by road from Misrata to Tripoli is now largely free of armour and is guarded by checkpoints staffed by soldiers carrying light weapons.

Flatbed lorries that had transported tanks to the front lines lay abandoned in olive groves near the western city of al-Khums, and there were no obvious signs of missile batteries, heavy artillery, or any large weaponry that could pose a threat to the low-flying helicopters.

Tripoli was again hit by bombs dropped from Nato jets over the weekend, with Gaddafi’s compound in the centre of the capital struck repeatedly. Watchtowers around the outskirts of the area, known as Bab al-Azazia, were blown-up in raids the RAF said were designed to show Libyans that impenetrable compounds were a thing of the past.

The TNC has been given semi-legitimacy as a government by Paris, London and Washington, which have all hosted Abdul Jalil and have sent trainers and money to the nascent organisation.

On Sunday, Libyan officials were sticking to their position that the AU’s plan for a negotiated ceasefire, followed by international supervisors arriving in Libya, would be the only way to end the conflict. However, deputy foreign minister Khaled Khaim refused to comment on whether an exit strategy for Gaddafi would be discussed. – AFP, guardian.co.uk

Just over a year ago, veteran radio presenter Xolani Gwala’s cancer was in remission. He spoke to the Mail & Guardian once he was back on air.
Read more
Advertising
Continue to the category
Coronavirus