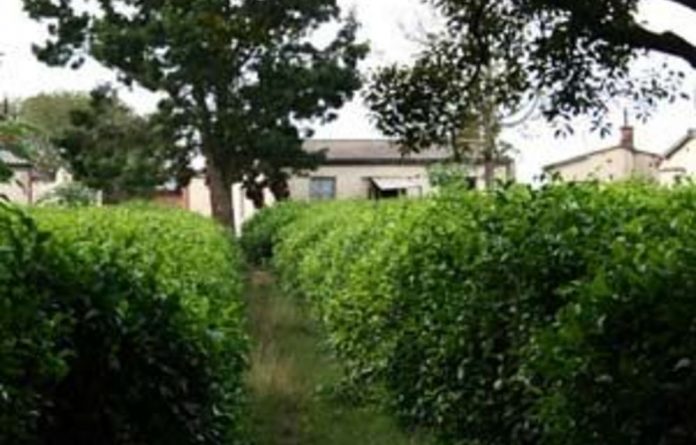 The largest tea estate in the southern hemisphere, Magwa Tea outside Lusikisiki in the Eastern Cape, faces ruin after being looted and abandoned by its workers earlier this year.

The 1 803 hectare farm had a turnover of R65-million a season and provided jobs and career training for 1 200 permanent and 2 300 seasonal workers.

In February, the farm was shut down when workers, the highest paid in the tea industry, went on the rampage after management refused their demand for a 104% increase.

By May, tea plants usually kept pruned to waist height, for ease of picking were shoulder high and useless.

The plants stretch as far as the eye can see on both sides of the dirt road that winds across the hills from Lusikisiki to Mbotjie on the Wild Coast, in Transkei.

“The crop for the year has been lost,” says Pierre Leppan, a director at the Eastern Cape Development Corporation (ECDC) which has managed the farm for the past seven years.

“The names of six managers are on a hitlist and the ECDC is unable to guarantee their safety. They are having to run the farm on their cellphones.”

The farm had started thriving in recent years, after decades of plundering, corruption and mismanagement.

A Magwa manager, who declined to be named for fear of his job and his safety, says the trouble started last year, soon after a Farm Workers’ Union (Fawu) official was redeployed to Cape Town and replaced by two others.

Harmonious relationship
The original union official had understood Magwa, its history, and what was and was not viable, but his successors had not.

“The workers and the management had a harmonious relationship until then,” the manager says.

“The two new officials were confrontational from the start. They misunderstood how Magwa worked. They thought, for example, that the management were the owners of the farm.”

The manager said the officials postponed a Magwa workers’ council election to allow seasonal workers to “boot out” most of the permanent workers.

Last year, the new council demanded a 104% wage increase, even though Fawu had negotiated a 7% nationwide increase for agricultural workers.

Magwa management told the council it was not authorised to approve the increase, but that the decision was up to the ECDC board and the department of agriculture.

Incensed, the workers cornered managers in their office and assaulted them. A violent strike, which was later declared illegal, went on for three months.

“Throughout the strike, the managers had shots fired at them,” the manager says.

“Vehicles were stolen and vandalised. Houses were looted and burned.”

The strike ended when the department of agriculture offered the Magwa employees a financial package to return to work.

Production was soon back on line, but the mood at Magwa remained tense.

“Workers were not following management’s instructions, which led to the suspension of programmes around the farm,” says the manager.

“When I went back in July, I could feel that something wasn’t lekker [right],” he says.

In March, workers went on the rampage again. “They destroyed everything in sight. They stole what they could. Fridges, freezers, ovens and vehicles — everything,” says Schoeman.

The police were called and rubber bullets and tear-gas were fired.

He received a desperate call for help from a manager.

“He said ‘Help Daan, they’re killing me’, but I couldn’t do anything. It was impossible to get in. They chopped him up with pangas, but he made it out [alive]. One of the security guards, though, was shot dead.

“It was terrible; that day, I started becoming an old man,” he says.

Permanent workers, who lived in houses on the 13 settlements on the farm and refused to take part in the strike, were chased off their properties.

Police spokesperson Captain Mduduzi Godlwana confirmed that one person was arrested for murdering the security guard and another 48 for public violence. They are to appear in court soon, he says.

Fawu official Tonga Mbaliese blames the management for the strike.

He says the initial dispute was about the imposition of a 253kg a day tea plucking quota, up from between 180kg and 200kg.

“The target was set unilaterally without employees agreeing with it.

“The workers are not the cause of the problems on Magwa. The problems are caused by the style of management,” Mbaliese says.

“There is no transparency at Magwa. Management can’t cry foul and blame everyone when they are the ones who are not working.”

Surrounding communities, politicians and tribal leaders have all laid claim to the land in past decades.

The plantation is in the Pondoland magisterial district of Lusikisiki, which falls under the Qawukeni Tribal Authority.

In the 19th century, the land was used to graze cattle, according to University of the Western Cape land and agrarian studies programme lecturer Thembela Kepe.

In a study titled Magwa Tea Venture in South Africa: Politics, Land and Economics, he writes that cattle was herded to the coastal grasslands during the winter months, when upland grazing was limited.

In the 1960s, Johan Mills, the then secretary to the Chief Minister of Transkei, suggested to Paramount Chief Botha Sigcawu that Pondoland needed a commercial venture to provide a local alternative to migrant labour to the sugar cane fields of Natal.

“When people rejected the notion of tea being good for the Mpondos, Sigcawu is said to have intimidated the residents, claiming that the land belonged to his father anyway and implying he could force them to move,” Kepe writes.

The residents retaliated by burning down Sigcawu’s supporters’ houses. Several deaths were reported, including that of Sigcawu’s brother, Chief Vukuyibambe Sigcawu.

Even after the plantation was established, it was beset by problems. Its assets were regularly plundered through corruption that continued into the 1990s.

Another problem was a demand by Fawu that workers receive higher wages at agricultural schemes.

It was thought that state-run enterprises should set a good example in labour practices. As a result, Magwa workers became some of the highest paid tea estate workers in southern Africa.

The high wages and poor profitability plunged the farm into financial trouble. A plan to lay off workers sparked violence in mid-2003 when 15 offices and a boardroom were burnt down.

In 2004, the ECDC, which was brought in as a custodian of the land, appointed a team of specialist tea farm managers to make the farm viable.

Exports at a minimum
It seemed an impossible task.

Magwa was producing just 1.2-million kg of “made” tea a season. Exports were at a minimum and the cost of production was “extremely high” at R25 a kilogramme.

However, by 2007, Magwa was achieving its highest-ever production figures, with 2.7-million tonnes of “made” tea a season.

“The department of agriculture would give us R15-million a year, and we were giving them R65-million back,” says the senior employee.

“The tea was sold in advance on contract, making in roads into huge markets such as China, Pakistan and the [United Kingdom].”

This success was despite the infrequent and late arrival of government funds and a monthly wage bill of R3.5-million.

Before operations at Magwa shut down, workers were earning five times more than those in Malawi, the farm’s general manager says.

They were also earning bonuses and being taken out of the fields and mentored.

“We were taking from the bottom and building up skills so that they could take over the running of the farm one day,” says the manager.

“Tea industry skills are in enormous demand around the world, so many of the Magwa workers were poached, but this was fine. We would train more. We became something of a university for the tea industry.”

Eastern Cape Rural Development spokesperson Ayabulela Ngoqo says a new Magwa board will be appointed on June 30, and will be tasked with finding a solution to the problems.

“The board will be given the prerogative to deal with all administrative matters affecting operations,” he says.

“We won’t have a harvest this year, but our main aim is to get it up and running again.” — Sapa

‘Middlemen at the heart of poor school infrastructure delivery’ — EE