Gaddafi calls for truce, but on his own terms 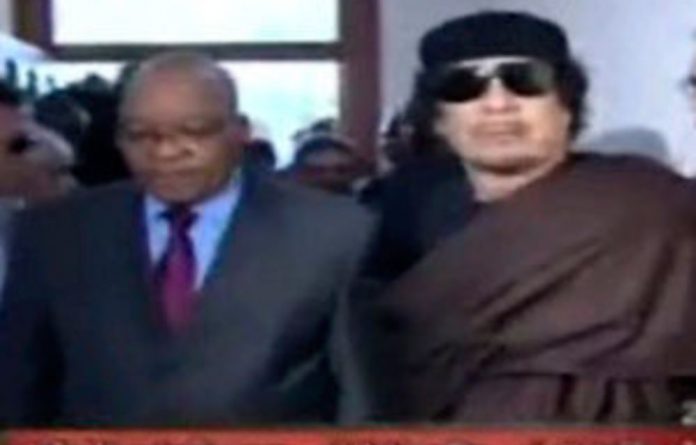 Muammar Gaddafi is ready for a truce to stop the fighting in his country, South African President Jacob Zuma said on Monday after meeting the Libyan ruler, but he listed familiar Gaddafi conditions that have scuttled previous ceasefire efforts. Rebels quickly rejected the offer.

Zuma, said Gaddafi is ready to accept an African Union initiative for a ceasefire that would stop all hostilities, including Nato airstrikes in support of rebel forces. “He is ready to implement the road map,” Zuma said.

Zuma said Gaddafi insists that “all Libyan be given a chance to talk among themselves” to determine the country’s future. He did not say Gaddafi is ready to step down, which is the central demand of the rebels. He was speaking to reporters from South African and Libyan TV, which broadcast his remarks late on Monday.

In April, Zuma led a delegation of the African Union to Tripoli with an African Union proposal for a truce. Gaddafi said he would accept the truce but quickly ignored it and resumed his attacks, while the rebels rejected the ceasefire out of hand because it did not include Gaddafi’s exit from power. Since then many ceasefire efforts have failed for similar reasons.

In Benghazi, the de facto rebel capital, rebel Foreign Minister Fathi Baja rejected the African Union plan. “We refuse completely, we don’t consider it a political initiative, it is only some stuff that Gaddafi wants to announce to stay in power,” he told the Associated Press.

He said he believes Zuma is in Tripoli to negotiate an exit strategy for Gaddafi, though Zuma’s office denies that. Baja also said the rebels would launch an offensive against Gaddafi soon.

For decades Gaddafi has identified Libya as an African as much as an Arab nation. He disbursed millions of dollars in aid to African nations and built himself up as a leader of the continent.

Zuma was greeted with all the requisite fanfare by Gaddafi’s beleaguered regime. Dozens of Gaddafi supporters, bused in for the welcoming, waved green Libyan flags and chanted slogans denouncing the Nato bombing campaign against Libyan government targets.

Nato temporarily lifted its no-fly zone over Libya to allow Zuma’s South African Air Force plane to land at the main military air base next to Tripoli.

Loss of support
In Rome on Monday, an indication that Gaddafi’s regime is losing support came from eight top Libyan army officers, including five generals, who defected from Gaddafi’s military. They appealed to their fellow officers to join the revolt.

Several senior officials, including at least three Cabinet ministers, have abandoned Gaddafi during the uprising that began in February. Even so, he clings tenaciously to power, and the military units still loyal to him are far superior to the forces available to the rebels.

One of the officers, General Melud Massoud Halasa, estimated that Gaddafi’s military forces are now “only 20% as effective” as what they were before the revolt broke out in mid-February, and that “not more than 10” generals remain loyal to Gaddafi.

An anti-government activist based in Tripoli said that dozens of residents angrily chanted against Gaddafi’s rule in a rare demonstration in the Libyan capital on Monday. His claims could not be confirmed because of restrictions placed on reporters in Tripoli. The activist sent reporters a YouTube video showing the men chanting, “There is only one God and Muammar [Gaddafi] is his enemy.” The timing and authenticity of the video could not be independently confirmed.

The Zuma visit came during relentless Nato bombing runs on Tripoli and other parts of the country, aimed at weakening Gaddafi’s military and giving the outgunned rebels a chance in their battle against the longtime ruler.

Though relations between Gaddafi and the African Union have been strained, Zuma has joined other African leaders in accusing Nato of overstepping its UN mandate to protect Libyan civilians and calling for an end to the airstrikes.

Zuma’s meeting with Gaddafi at his Bab al-Aziziyah compound was attended by only two other people, according to a Libyan official who spoke on condition of anonymity because he was not at liberty to discuss the talks. – Sapa-AP