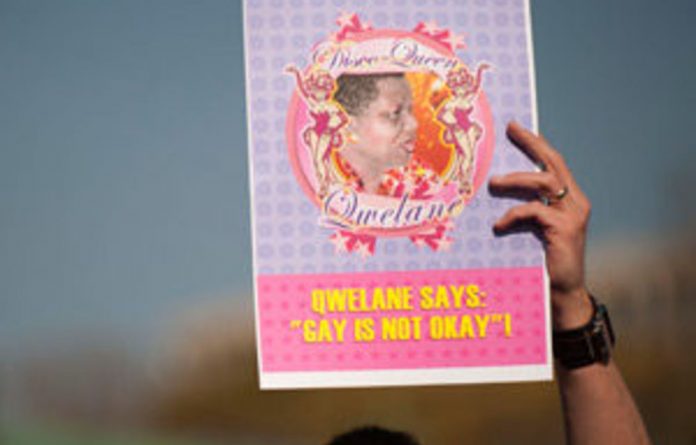 The court found that a cartoon in his column amounted to hate speech, and that both his article and the cartoon propagated hatred and harm.

The article was published in the newspaper on July 20 2008, under the headline: “Call me names, but gay is NOT okay.”

Qwelane was ordered to make an unconditional apology to the gay and lesbian community, and pay R100 000 to the SA Human Rights Commission.

No costs were ordered.

“We are quite pleased that the court has found in our favour … R100 000 is quite a reasonable amount,” said SAHRC spokesperson Vincent Moaga.

“The focus is not on the money, but the message coming out of this. With recent hate speech and crimes against the community, the court is sending positive messages,” he said.

The SAHRC initiated court proceedings in terms of the Promotion of Equality and Prevention of Unfair Discrimination Act.

Qwelane did not make much of an appearance in the course of the trial. He failed to sign court papers presented to him by a clerk and did not file responding papers.

The court ruled that, as it had only one version of the story, the SAHRC’s argument would be accepted.

“From here, we will have to look at the judgment and make sure that Qwelane abides by the court order,” Moaga said.

In 2008, the press ombudsman found the paper was “disparaging” of homosexuals in publishing Qwelane’s column.

Ombudsman Joe Thloloe received nearly 1 000 complaints after the paper published the column, he said in a statement on July 29 2008.

Thloloe found that the thrust of the column was a call for a revision of the country’s Constitution to take away the rights that gays and lesbians had won in the new South Africa.

“This is the same type of debate as those on the death penalty and on proportional representation. Debates about amendments to the Constitution are protected under the freedom of speech clauses of the Constitution. Qwelane has the right to call for amendments.”

“It is robust language, but not hate speech,” said Thloloe.

He also did not equate homosexuality with bestiality.

“What he does say is that after allowing gay marriages it will not be long before we legalise bestiality. He is not equating the two, but placing them on different rungs on a ladder, with bestiality lower. By implication however he is placing heterosexuality higher.”

Asked whether the column could lead to violence against gays and lesbians, Thloloe responded: “To me it appears most unlikely.”

There was nothing in the column inciting hatred and calling for the harming of homosexuals.

“Columnists are protected by the Constitution for as long as their comments don’t propagate war, incite imminent violence and advocate hatred that constitutes incitement to cause harm.

“Qwelane was well within the law but fell foul of the press code.”