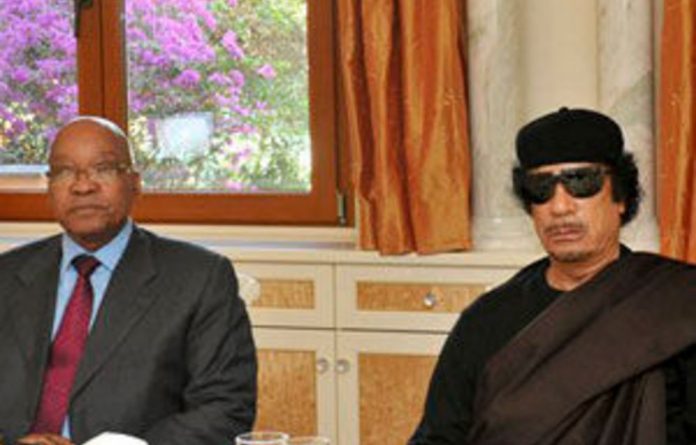 Minister of International Relations and Cooperation Maite Nkoana-Mashabane on Tuesday called for an immediate ceasefire in Libya, after President Jacob Zuma’s talks in Tripoli failed to advance a regional peace plan.

“Consistent with the decision of the African Union on Libya, we reiterate our call for immediate ceasefire that is verifiable and encourage the warring parties to begin a dialogue to a democratic transition,” Nkoana-Mashabane told Parliament.

“We strongly still believe that there is no solution for the Libyan problem that will come militarily but only with political dialogue,” she added.

Zuma met with Muammar Gaddafi in Tripoli on Monday, but failed to close the gap between the Libyan leader and rebels on a plan proposed by the AU.

The rebels have rejected the AU proposal, which calls for a ceasefire and “implementation of the political reforms necessary for the elimination of the causes of the current crisis”.

That falls short of the rebel demand for Gaddafi to leave power, and Zuma has so far said nothing about how to bridge the impasse.

After meeting Gaddafi, Zuma said that the Libyan leader was “ready to implement the roadmap of the AU”, which would include a halt to Nato-led bombing.

Gaddafi insisted “all Libyans be given a chance to talk among themselves” to determine the country’s future, said Zuma, who is heading the AU mediation process in Libya.

But Zuma has opposed Gaddafi’s efforts to win greater influence through the AU, including his drive to create a “United States of Africa” that the Libyan leader dreamed of basing in his hometown of Syrte.

South Africa was once tipped as a possible exile destination for Gaddafi, but Pretoria has said no offer was ever extended.

That possibility is now more remote after the chief prosecutor at the International Criminal Court in The Hague sought an arrest warrant for him on charges of crimes against humanity, accusing him of having ordered his forces to gun down civilians in their homes, at funerals and outside mosques.

If the warrant is issued by the court’s judges, South Africa’s treaty obligations would require Gaddafi’s arrest if he were to enter the country.

But the Times newspaper reported on Tuesday that Libyan officials have entered into an agreement with South African law firm Langa Attorneys to provide legal advice and services to Gaddafi and other top leaders.

“The deal will include defending the Libyan government officials in the event that they are hauled before the International Criminal Court [in The Hague] on charges of human rights abuses,” a source told the newspaper.

Under the agreement reportedly reached three weeks ago, the firm was asked to assemble a team of international law experts to put together Gaddafi’s defence strategy if he quits, says the report. — AFP