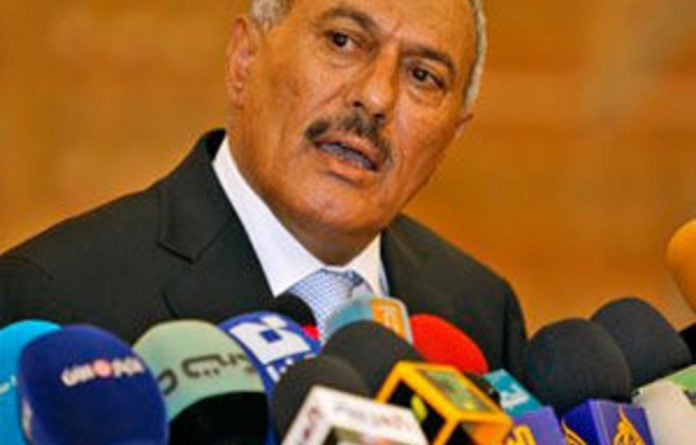 Gun battles raged on Wednesday on the streets of Yemen’s capital, killing 39 people, witnesses said as a truce between security forces and tribesmen collapsed, residents fled and embassies bolted their doors.

A medic at Jumhuriya hospital said 37 people, most of them combatants, were killed in overnight clashes in Sana’a, while an Agence France-Presse photographer said the bodies of two other tribesmen were taken to al-Ulum hospital during the day.

Heavy fighting ensued on Wednesday, prompting Kuwait to withdraw its diplomatic staff from the city, one day after Italy closed its embassy on concerns of escalating violence following threats against European missions.

The fighting between tribesmen loyal to Sheikh Sadiq al-Ahmar, who heads the powerful Hashid federation, and security forces loyal to embattled President Ali Abdullah Saleh broke out in the city on Tuesday.

Truce ended
It ended a truce announced on Friday, after a week of fierce clashes that erupted when Saleh warned of a civil war as he refused to sign a Gulf-brokered plan for him to give up office as demanded by protesters.

Al-Ahmar had in March pledged his support for protesters who have been demonstrating since January for the departure of Saleh, who has been in power since 1978.

The defence ministry’s 26sep.net news website said tribesmen had on Wednesday occupied a building near the presidential palace, in the south of Sana’a.

The guns fell silent on Wednesday afternoon, but it was unclear how long the lull would last as dozens of armed tribesmen could be seen in the streets of al-Hasaba, where al-Ahmar’s home is located.

Residents had reported street fighting took place throughout the night in al-Hasaba, an area in the city’s north.

Witnesses said reinforcements from the Republican Guards, an elite unit loyal to the president, had been sent to al-Hasaba.

A fourth army brigade camp located near the state television and radio headquarters was targeted by rockets, as was the interior ministry headquarters, witnesses said. — AFP