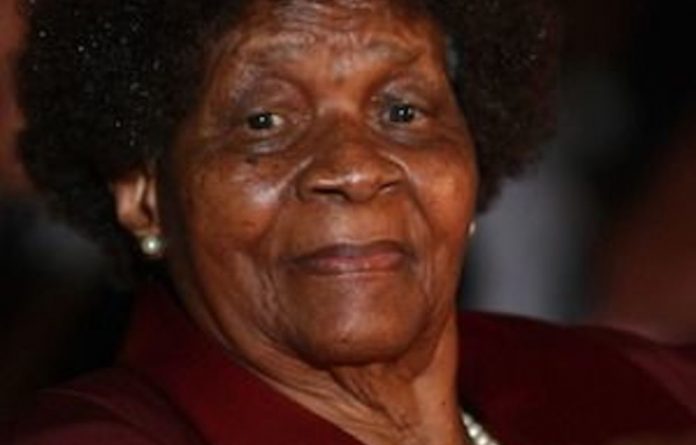 Veteran ANC stalwart Albertina Sisulu has died at the age of 92 in her Linden, Johannesburg home, SABC news reported on Thursday.

The wife of former ANC president Walter Sisulu, she was one of the last of a generation of leaders venerated as struggle heroes.

She had little interest in politics when she met Walter Sisulu, future general secretary of the ANC.

But she plunged wholeheartedly into the liberation struggle and emerged from years of detention, bannings and arrests as a major political figure in her own right.

“All these years I never had, you know, a comfortable life,” she commented years later.

Sisulu, born Nontsikelelo Albertina Tetiwe, was born in the Tsomo district of the Transkei on October 21 1918, the second of five children of Bonilizwe and Monikazi Tetiwe.

Orphaned as a teenager, she was obliged to help provide for her younger brothers and sisters. Abandoning her ambition to train as a teacher, she left the Transkei to train as a nurse at Johannesburg’s Non-European Hospital, as nurses were paid during training.

Education was key
She nevertheless continued for the rest of her life to be keenly interested in education, which she saw as central to the struggle.

“Even in the struggle, if people don’t know what they are fighting for it is useless,” she said in later years.

“We must educate our women because often they suffer the most — and their children with them. If we all knew what was really important, we would just need to shout once.”

Sisulu started work in Johannesburg as a midwife in 1946, often walking to visit patients in townships.
“You know what it means to be a midwife? You have got to carry a big suitcase full of bottles and for your lotions that you are going to use, and bowls and receivers, and we used to carry those suitcases on our heads,” she said.

In 1944 she married Walter Sisulu, an ANC activist, with whom she was to have five children, Max Vuyisile, Mlungisi, Zwelakhe, Lindiwe and Nonkululeko. They were married for 59 years, until he died in his wife’s arms in May 2003 at the age of 90.

Max and Lindiwe went on to become successful and well-respected politicians in the new South Africa. Max is currently the speaker of Parliament and Lindiwe the minister of defence and military veterans.

True love
Albertina said of her marriage: “I was told that I was marrying a politician and there was no courtship or anything like that.”

Yet at his funeral their granddaughter read a tribute to him on her behalf: “Walter, what do I do without you? It was for you who I woke up in the morning, it was for you who I lived … You were taken away by the evils of the past the first time, but I knew you would come back to me. Now the cold hand of death has taken you and left a void in my heart.”

Political involvement was part of her life, particularly women’s organisations.

She joined the ANC Women’s League and, when it was relaunched in 1990, she became its deputy president. She helped form the Federation of SA Women in 1954 and the following year helped launch the Freedom Charter.

Sisulu opposed Bantu education, running schools from home, and marched to the Union Buildings in Pretoria to protest passes for women in 1955. “We said, ‘nothing doing’. We are not going to carry passes.” She spent three weeks in jail before being acquitted on pass charges, with Nelson Mandela as her lawyer.

Her husband was the ANC general-secretary by then so she was the breadwinner — “because my husband was just for ANC then”.

She recruited nurses to go to Tanzania, to replace British nurses who left after Tanzanian independence. The South African nurses had to be “smuggled” out of SA into Botswana and from there they flew to Tanzania.

House arrest
By 1964 her husband was in jail for life and she was banned for five years, then placed under house-arrest for 10 years.

“That was the worst,” said Sisulu.

She was alone with her own five children plus her late sister-in-law’s three children.

She was in and out of jail, including one stint with her son, then 17-years-old, who went into exile after that.

Her children grew up in boarding schools, and by the mid-70s, two were in exile.

“None of the children in this house hasn’t tasted jail,” she commented, describing the constant jailings and questionings by police as “the food in this house”. Once three generations were in jail simultaneously — her husband, her son and her grandson.

She worked as a nurse until 1983 when she “retired” at the age of 65, only to start working for Soweto doctor Abu-Baker Asvat who was murdered a few years later.

In 1983 she was elected co-president of the United Democratic Front (UDF).

The same year she was charged with furthering the aims of the ANC; her conviction was overturned on appeal but she was restricted to her home under state of emergency laws.

In October 1989 her restrictions were lifted and the following day her husband was released from jail.

In 1994, she was elected to the first democratic Parliament, which she served until retiring four years later. That year she received an award from then-president Mandela.

She may have retired again but her activism did not stop.

In 2000, the family publicly disclosed that their adopted son, Gerald Lockman, had died of HIV/Aids.

In 2003, now widowed, Sisulu celebrated her 85th birthday by unveiling the plaque for a new community centre for children with special needs in Orlando West. It was mainly through her tenacity that this centre became a reality — she worked on it for 20 years.

Weeks later, she and Mandela opened the Walter Sisulu Paediatric Cardiac Centre for Africa in Johannesburg, named for her late husband. She became a trustee for the centre and helped fundraise for it.

Her impact was so great that in April 2004, Thabo Mbeki at his inauguration as president referred to her and Adelaide Tambo along with his own mother Epainette Mbeki as “my mothers”.

Still on the go in August 2006, a frail Sisulu attended the 50th anniversary re-enactment of the 1956 Women’s March on Pretoria. “There are many difficulties still in our path,” she said in a message read there on her behalf.

Her life is detailed in a biography by her daughter-in-law Elinor Sisulu, Walter and Albertina Sisulu: In our lifetime. – Sapa