Albertina Sisulu ‘was truly the mother of the nation’ 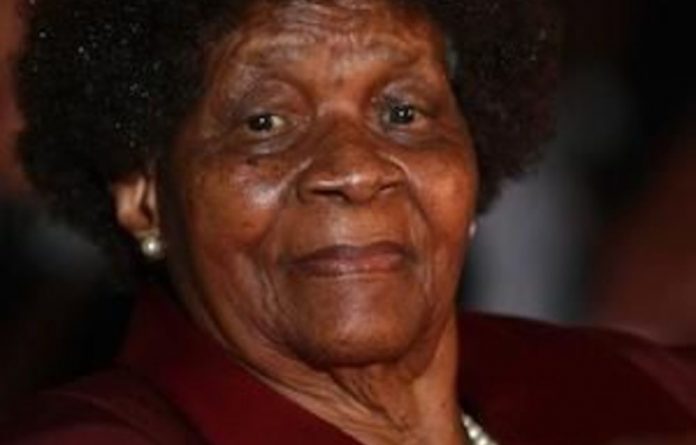 Albertina Sisulu combined political and parental guidance in her work against apartheid, the ANC said in a tribute to one of the party’s key members during the anti-apartheid struggle, who died on Thursday evening.

“MaSisulu passed on yesterday night, 2nd June 2011, at the age of 92 after a fulfilling life as a people’s servant coupled with her unwavering commitment and leadership to the liberation of our people,” the ANC said in a statement issued on Friday.

“MaSisulu epitomised the struggles of the poor, the women and the disenfranchised.”

Not only had her family lost her, but the country had lost an irreplaceable leader.

“She embodied grace and humility,” the ANC said.

Sisulu was a founder member of the United Democratic Front (UDF) and the Federation of South African Women.

“She did not only give political guidance, but she was also a mother figure to all activists,” the ANC said.

“To us she has left huge footprints that tracks our history of suffering, and resilience under immeasurable harassment and dehumanisation under apartheid.”

South Africans today enjoyed freedom and democracy because of her “selfless contribution”.

The ANC offered its condolences to her family and said funeral arrangements would be announced when they had been finalised.

Earlier, spokesperson Jackson Mthembu said: “We are devastated that an icon and veteran of the ANC has passed on.

“When it was difficult to be loved by your own parents during the struggle, because they didn’t understand it, she was there to give us wonderful political guidance and motherly love.”

He said the ANC remained indebted to Sisulu and her leadership when the ANC was banned and its leaders imprisoned or in exile.

“We owe so much of the freedom we enjoy today to people like her. We owe democracy to the likes of Mama Sisulu. We will miss her.”

“She showed extraordinary fortitude, courage and perseverance in the most difficult times,” said Zille in her tribute on Friday.

“She raised her family as a single parent while her husband was in prison. She was unwavering in her [commitment] to justice for all and the values that she lived are now embedded in our Constitution.”

The best tribute to her sacrifices was to sustain and defend democracy.

Sisulu died at her home in Linden, Johannesburg, at the age of 92 on Thursday night while watching television. Some of her grandchildren and housekeepers were with her.

Lindiwe Sisulu looked composed in her black suit as she entered the home where her mother had spent her last years.

Aides asked media and the public to “give her space” as she went inside.

A relative told the media there would be a prayer meeting at the house every night between 6pm and 7pm.

“We need to get all the important people in her life here so we can arrange the funeral,” he said.

Dali Tambo, the son of Oliver Tambo, was among those who arrived to comfort the family.

“She [Sisulu] gave me unconditional love,” he said outside.

“She called me her son and I called her mom … She was dearly loved.”

“She was truly the mother of the nation,” said Tambo.

Sisulu’s grandson Shaka Sisulu, who tweeted memories of his grandmother throughout the morning, also arrived at the house.

“Thanks to all ur messages of love and support. My condolences go out to u all as well, she truly was everyone’s ma, gogo or koko. God Bless,” he wrote in a tweet.

Former Methodist bishop and Congress of the People president Mvume Dandala told reporters: “We are all cut up”.

“We came to offer the family our prayers.”

He asked that all South Africans pray for the family.

Mokonyane described Sisulu as her mentor and said the best way to honour her would be to preserve the freedom to which she had contributed.

Earlier, the family and neighbours brought out snacks and coffee for the media and portable toilets were also set up.

Meanwhile, people arrived at the gates to deliver flowers and food to the family. – Sapa