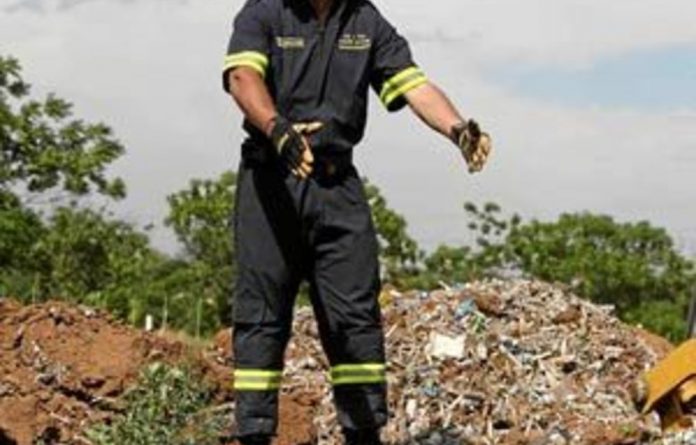 In July last year a festering medical waste collection crisis in the Northern Cape burst out into the open — literally.

An environmental assessment at a downtown Kimberley warehouse uncovered a secret stash of plastic buckets and bags containing rotting body parts, foetuses and placentas collected from state hospitals and clinics in the province.

The buckets stood in haphazard stacks in the incubator-like heat generated by the hot zinc roof. Some of the lids had popped off the buckets, unable to contain the build-up of micro-organisms within. Foul fluids oozed from some of the bags and ran in sticky rivulets across the concrete floor.

In response to the crisis the Northern Cape health department issued a three-month tender, later extended on a month-by-month basis, for a service provider to clear the medical waste backlog and provide a new collection and disposal service for hospitals and clinics.

It was at this stage that rot of a different sort set in.

A losing bidder for the tender last July and a source employed by the winning bidder have approached the Mail & Guardian with allegations of bribes solicited, tenders rigged and health regulations violated.

The allegations are also symptomatic of the state of the medical waste industry’s dealings with the government (see “Industry a can of worms” below).

The department insisted this week that the tender, awarded to Tshenolo Resources, was “fair and transparent”, but the M&G has learned that it is under forensic investigation by the provincial auditor general.

Tshenolo Resources said its competitors were trying to “diminish our chances” of being awarded a lucrative new long-term medical waste tender.

The department is currently evaluating bids.

Bribery
When the medical waste collection crisis struck in mid-2010, Compass Waste Management offered to assist the department to clear the backlog. The company met department officials on several occasions to discuss terms.

Jan van den Berg, Compass operations manager, claims that on June 29 at the Kimberley Spur the Kimberley Hospital chief executive, Gordon Moncho, asked for a bribe for himself and implied that he was requesting another for provincial health minister Mxolisi Sokatcha.

Van den Berg says Moncho pulled him aside and asked: “Are you aware that we will give you the business, but there will be an expectation?”

Van den Berg said Moncho walked him and Compass managing director Ian du Randt out “and asked me to phone him later. Sitting in the car with Ian [du Randt] I turned on the speaker phone and called Moncho. He said he wanted to know if Compass had changed its mind.”

Du Randt, who confirmed overhearing the conversation, believed his company’s refusal to pay a bribe sank its tender bid. He added that he was prepared to obtain phone records, at Compass’s expense, to corroborate Van den Berg’s allegations.

Moncho did not respond to questions this week.

While the testimony of both men appears to be damning, it does not prove that Sokatcha was associated with the alleged bribe request. “At no stage did the MEC directly involve himself in asking for a bribe,” Van den Berg said.

Sokatsha said: “The allegation made by Van den Berg has no basis and suggests a lot that is ugly and repulsive [and] not worthy to publish in [a] reputable paper like the Mail & Guardian. [I have] no — clue of this allegation.”

The tender was awarded to Tshenolo Resources on July 20. Comparative pricing later obtained by Compass showed that Tshenolo had bid R4-million, or R1.6-million a month, for the three-month tender, whereas Compass’s bid was far lower — R1.56-million, or R520 000 a month.

Tender-rigging
The man who prepared Tshenolo Resources’ tender documentation and then acted as its project manager gave an affidavit to the M&G last month in which he described an approach to him by Tshenolo owner Wandile Bozwana several months earlier.

The insider asked not to be named.

Bozwana, a former official in the North West housing department, had resigned from that department in disgrace in 2006 after being implicated by the forensic investigators of a scandal involving the state’s North West Housing Corporation.

Having reinvented himself as a tenderpreneur, Bozwana needed a project manager because he “knew nothing about the health waste risk industry”, said the source.

The insider, who has 15 years’ experience in the business, said Bozwana had access to the bid documentation submitted to the department by rival bidders, including Compass Waste. How he obtained the documentation is unclear, but the insider said he was able to “use these documents to calculate the pricing for our proposal”.

Bozwana also told the insider that the bidding process had already closed and department officials were “phoning — and telling him to hurry up with our proposal”.

He did not respond this week to written questions about his former project manager’s allegations but told the M&G that Tshenolo had answered allegations, as part of the auditor general’s forensic audit. “Go to the department and request it [the audit report],” he said.

The department said it is awaiting the report.

Incompetence
The insider’s affidavit states that “Tshenolo Resources did not have the infrastructure to handle either the contract or the medical waste”.

Two days after the tender award, work began. The company lacked vehicles and those they hired could not be clearly identified as carrying hazardous waste, a legal requirement.

“I told them that it was unlawful [to use unmarked trucks to transport medical waste] but they didn’t care,” the insider said.

The company did not have a trained workforce with protective equipment, which exposed them to potentially lethal infections.

“Hospitals were also complaining about unmarked [waste] containers that were delivered to them — hospitals were putting sharps [sharp objects] in anatomical waste containers and vice versa,” the insider said.

Tshenolo also had no registered transfer or storage facility, meaning that they stored waste in unmarked trucks on site at the Kimberley and Springbok state hospitals before it could be transported to the nearest treatment facility, in Bloemfontein.

“The trucks are hardly ever washed and, when they were, it took place at the provincial hospitals without using any disinfectants to clean and sanitise the vehicles. At one stage they used one of their — transport trucks to collect liquor at a liquor store in Kimberley to have a year-end function, the insider said.

Unhappy with the company’s ethics, the insider signed a confidentiality agreement and left Tshenolo in December last year.

“Now no one is left with the necessary knowledge and qualifications to adhere to all the required legislation,” he said in his affidavit.

Although the tender was initially awarded to Tshenolo last July for three months, it is still transporting medical waste for the department 10 months later. “The trick here is to keep the thing going for as long as possible, while everyone benefits,” the insider said.

Despite these allegations, the department said it was “satisfied in the manner that the required services were — rendered by Tshenolo”.

However, according to the department’s 2009-2010 annual report, it managed just one site visit to monitor waste handling by its contractor in the entire year. It had set a target of four.

There are 160 hospitals and clinics and 36 medical waste collection points scattered around the vast Northern Cape.

Before he left, the insider said, Tshenolo was preparing to bid for a new medical waste tender issued by the department, this time to service Northern Cape hospitals for an extended period. “Bozwana [had] already received the specifications for the tender although the tender [had] not been published yet,” he said.

Compass Waste is again competing with Tshenolo for the new tender.

Industry a can of worms

Three-quarters of all companies in the medical waste sector have been investigated (or are currently under investigation) for criminal environmental violations, according to the Green Scorpions, the environmental affairs department’s elite law enforcement unit.

Meanwhile, the healthcare waste forum, a branch of the Institute of Waste Management, has split, with gore flying in all directions.

“Our members are not the ones with legal prosecutions against them,” said breakaway African Medical Waste Association chair Janet Magner. “The ones which stayed with the institute all do.”

But both agree on one thing: money and greed prevail in an industry where the tenders are massive and the number of competitors small.

“It’s out of control, it’s in crisis,” Jewaskiewitz said.

The industry is one of the most heavily regulated in the country, with 18 national laws and countless provincial and municipal by-laws applying.

Rightly so: medical waste is a hazardous cocktail of human anatomical waste, non-anatomical waste such as bandages and swabs, needles and chemical and radioactive waste. Each category must be dealt with separately.

But Magner believes inconsistency among provinces in applying the laws creates too many loopholes.

“Government also needs to favour legal compliance over the cheapest option. That just leads to corner-cutting,” she said. — Lionel Faull

Read more on the amaBhungane blog