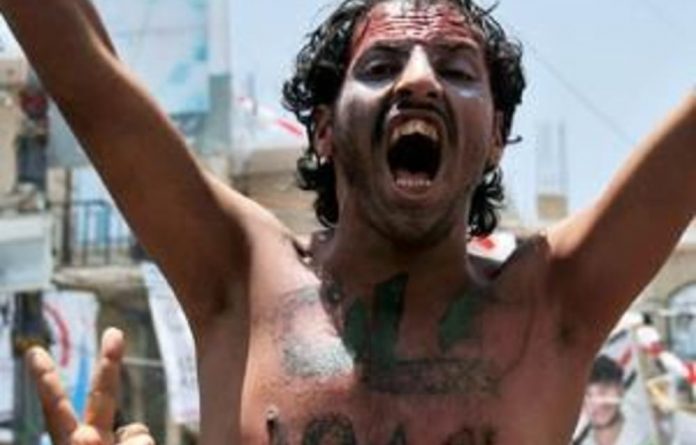 Every minute Yemen’s President Ali Abdullah Saleh spends away from his country is one step closer to the end of his three-decade rule.

Wounded in a rocket attack on his palace in the Yemeni capital of Sana’a on Friday, Saleh is in Saudi Arabia seeking medical treatment at a pivotal moment in the five month-long public uprising in impoverished Yemen, a near-failed state on the tip of the Arabian Peninsula.

Amid conflicting reports, several things remained unclear: the degree of Saleh’s injuries, whether he left behind any sons or nephews to try and keep a grip on power, and whether he would return at all.

“All we know is we are at a very, very dangerous moment,” said Sana’a-based political analyst Ali Seif Hassan.

There are two scenarios to consider, he said.

One is that Saleh (69) left a vacuum that his relatives will rush to fill, leading to clashes against Saleh’s tribal foes and civil war.

Two, that Saudi Arabia may have brokered a face-saving agreement that allows Saleh to leave the country and transfer power.

Much depends on how Saudi Arabia, the Arab world’s most influential state, positions itself in the coming hours and days. It is Yemen’s biggest financial donor, bankrolling Saleh’s government, supplying the military and supporting hospitals.

The world’s top oil exporter shares a 1 500km border with Yemen, and until recently with the United States had backed Saleh as an ally against a Yemen-based arm of al-Qaeda.

As it became clear in April and May that anti-government protesters on Yemen’s streets had no intention of ending their call for Saleh’s departure, the Saudi government and Gulf Arab states stepped in three times to broker a deal between Saleh and the opposition. All fell through at the last minute.

But Saudi Arabia, which also funds tribes to fight against al-Qaeda, had not yet taken the decisive step of pulling the plug on its financial support, most likely because of the uncertainty of how a power vacuum would be filled.

If Saleh stays, he would become the second Arab leader to find refuge in Saudi Arabia after Tunisia’s President Zine al-Abidine Ben Ali fled to the kingdom on January 14 after protests forced him out. He would also be third to fall in the “Arab Spring” that has also seen the downfall of Egypt’s Hosni Mubarak.

Saudi political analyst Khalid al-Dakhil said Saleh would not have travelled to Saudi Arabia unless he had intended to seek an exit.

“The Speaker of Parliament, Prime Minister and President are here so effectively the government is here,” Dakhil said. “This is going to facilitate the arrangement for Ali Abdullah Saleh to step down.”

Rival clans and political elites took their battle to the streets of Sana’a two weeks ago. About 200 people were killed in the fighting and thousands have streamed out of the city.

Attempted coup
The rocket attack on Saleh two days ago, which killed seven people and also wounded the prime minister, two deputy prime ministers and the speakers of both parliamentary chambers, was marked by its precision, skill and inside knowledge.

Saleh and the others were in a mosque inside his palace and only a betrayal by an insider could have pinpointed his location, Stratfor analysts said.

In other words, it was an assassination attempt.

Saleh, speaking only via audio after the attack, blamed it on an “outlaw gang” but it most likely a coup attempt, although no one has stepped forward to claim responsibility.

“This was not the job of tribesmen, but of military men, supported by members of the regime thought to be close to Saleh,” they said.

“For that reason, Stratfor suspects that Saleh’s most formidable opponent within the military, Major General Ali Mohsen al-Ahmar, who has been conspicuously quiet over the past few days and who commands a great deal of respect among Yemen’s old guard, was involved in the apparent coup plot.”

Ali Mohsen, along with other generals, threw their support behind protesters on March 21 after snipers shot dead 52 protesters in a Sanaa square.

In another sign that Saleh may be preparing to exit, he also took 35 relatives with him to Saudi Arabia, although it was not clear how many sons and nephews went with him. Many were installed in the Yemeni government apparatus.

End of the line
Saleh has said all along that he was seeking an “honourable exit” and, in negotiations with Gulf Araba states over a power transfer deal, had insisted on — and received — guarantees that he would be immune from prosecution.

A signal may also come from how Yemenis, from renegade generals to the tribes and anti-government protesters, react to Saleh’s departure.

A calming of the violence that has pushed Yemen to the brink of civil war could persuade Saudi Arabia that Saleh’s permanent departure offers the best chance for Yemen to claw back some peace and stability.

“[The demonstrators] wanted the president to leave the country. This (Saleh’s departure) will, maybe, respond to one of the requests of the demonstrators,” said Mahjoob Zweiri, history professor at Qatar University. “I think we have to look at what has happened in the last few days, it has changed the whole dynamic within the Yemeni political scene.” – Reuters