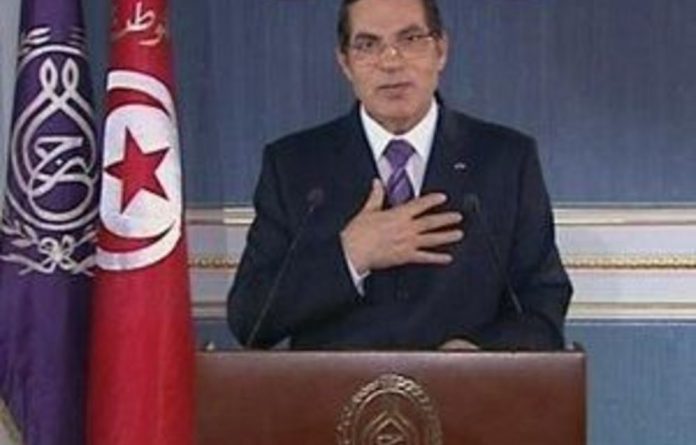 Deposed and exiled Tunisian autocrat Zine al-Abidine Ben Ali broke his silence on Monday to denounce his imminent trial on corruption charges as a “masquerade”, according to his French lawyer.

“Tired of being made a sacrificial lamb by lies and injustice, President Ben Ali has exceptionally dropped his discretion,” said Jean-Yves Le Borgne, who represents the former leader in France.

Ben Ali fled Tunisia in January after a revolt against his 23-year rule and is thought to be in Saudi Arabia. Family members say he suffered a stroke in February.

Tunisia’s new authorities are preparing to try him and his wife Leila Trabelsi on drugs, guns and graft charges in absentia.

Legal challenges
The statement represents the first time the 74-year-old leader has spoken out since fleeing Tunis, even indirectly, and is the first sign he plans to fight the various legal challenges hanging over him.

“The searches conducted in his official and personal offices are just stage-dressing designed to discredit him,” Le Borgne alleged.

“The case that Tunisia is building against him is nothing but a masquerade which serves no purpose other than to mark a symbolic break with the past.”

But he insisted that reports that the ousted strongman had significant assets in France were false, declaring that he had “no real estate, no bank accounts in France and none in any other foreign country”.

Smear campaign
And he alleged that Ben Ali was the victim of a smear campaign designed to make him and his family appear to be solely responsible for the problems that led to the Tunisian revolt, spearheaded by anti-corruption protests.

But anti-graft watchdogs have lodged a formal complaint alleging looted Tunisian funds are being held in France and a formal inquiry has begun.

And back in Ben Ali’s homeland, the justice ministry said on Friday that trials could begin in the next few days or weeks.

“The investigating magistrates have completed their inquiries,” said spokesperson Kadhem Zine el-Abidine, adding that the first charge relates to the discovery of weapons and drugs in the presidential palace at Carthage.

Almost 2kg of narcotics, thought to be cannabis, were allegedly found in the former president’s private office.

These finds form the basis of only two of a total of 88 continuing inquiries into the first couple, their family and the regime’s former ministers and officials, the spokesperson said.

Authorities are also looking into cases of murder, abuse of power, trafficking of archaeological artefacts and money laundering.

Tunisia’s interim administration has demanded the former president’s extradition from Saudi Arabia along with his wife, and several European countries have frozen assets belonging to Ben Ali and his entourage.

Arab Spring
The Tunisian revolution was the first and so far the most successful of a string of uprisings against autocratic rulers in the Middle East and north Africa, which have come to be known as the Arab Spring.

Egypt began a similar programme of democratic reform after the fall of Hosni Mubarak, but Libya and Yemen have fallen into civil conflict and pro-democracy protests in Bahrain and Syria face brutal repression. — Sapa-AFP