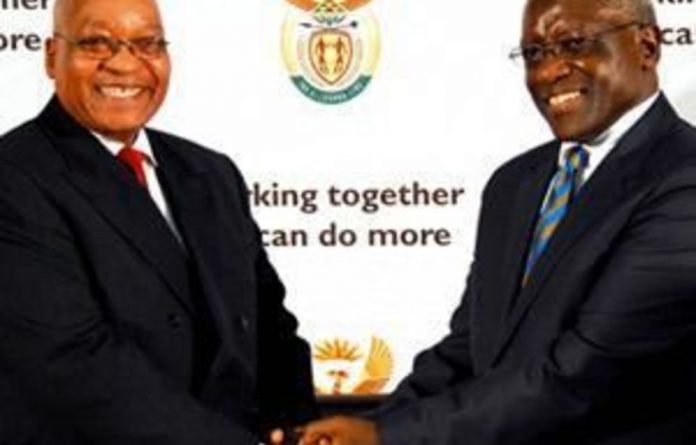 Justice Minister Jeff Radebe on Tuesday praised Chief Justice Sandile Ngcobo for “doing a bloody good job” and said the government would oppose an expected legal challenge to the extension of his term.

“We believe Wits is wrong in fact and in law and we will resist any legal challenge from the Centre for Applied Legal Studies,” Radebe told a media briefing ahead of the justice budget vote in Parliament.

“We believe we are on solid legal ground.

“Judge Ngcobo, ever since 2009, has showed that the doubting Thomases were wrong. We believe he is the best chief justice around and he is doing a bloody good job.”

The Centre For Applied Legal Studies (Cals), which is based at the University of the Witwatersrand, said section 8(a) of the Judges’ Remuneration and Conditions of Employment Act was “unconstitutional and invalid”.

The provision was used last week by President Jacob Zuma to reappoint Ngcobo for another five years, but Cals claimed it violated the constitutional guarantee of judicial independence.

The issue was raised by several speakers in the justice budget debate, just after the briefing.

Democratic Alliance MP Dene Smuts said she had long supported the extension of Ngcobo’s term of office “because he will ensure the institutional independence and in time even the management of the courts”.

But she added that section 176(1) of the Constitution demands that it be done by an Act of Parliament, advancing the same argument as Cals.

“It is a pity that the Arthur Chaskalson Act has been used for this purpose and has now caused a challenge.”

‘Nothing has been done that is procedurally wrong’
African National Congress MP John Jeffery argued that section 176 was satisfied because by applying a provision of the Judges’ Remuneration and Conditions of Employment Act, passed in 2001, Zuma was acting in accordance with an Act of Parliament.

He said it was strange that those who raised the issue generally had no problem with Ngcobo but wanted to challenge his position because they disagreed with the process followed.

In his response to the debate, Radebe reiterated that “nothing has been done that is procedurally wrong”.

Constitutional law expert Pierre de Vos said it was true that Zuma had acted in accordance with the 2001 Act.

But he said the case would rest on whether section 8 of the law was constitutional, and there might be a strong argument that it was not because it sought to delegate a power given to Parliament by the Constitution, to the president.

“For Parliament to give the president a discretion may potentially affect the independence of the judiciary,” he said, adding that there may be “a reasonable apprehension” that a judge could seek to win the president’s favour if he or she wanted an extension of term.

Zuma disclosed on Friday that Ngcobo would continue to serve as South Africa’s chief judge for the next five years. Zuma said that on August 15 this year, Ngcobo would have held office as a judge and Constitutional Court judge for a cumulative period of 15 years and three months.

Jeffery suggested that the matter of their length of service should eventually be settled by the Superior Courts Bill, which places the administration of courts under the chief justice.

The provision was criticised for making it possible in theory to load the court with politically compliant judges.

The Bill still proposes making the Constitutional Court the apex court in all matters, and not just constitutional cases.

Smuts had said this was problematic because the judges currently serving at the court were not appointed with this function in mind. — Sapa