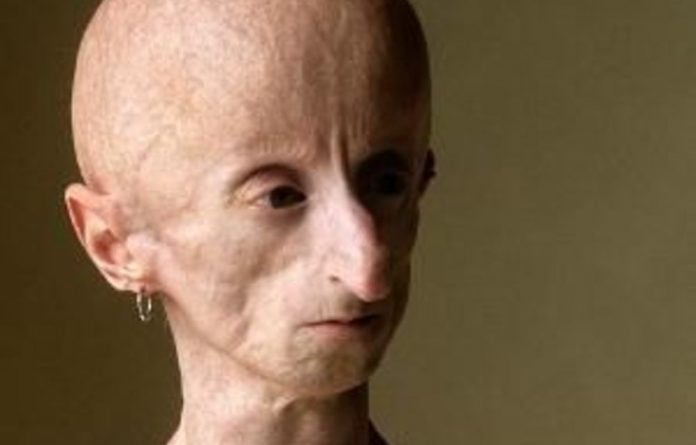 Leon Botha, an accomplished South African painter and DJ, as well as one of the world’s oldest survivors of progeria, a rare genetic condition causing premature aging, died after heart complications on June 5 2011. He was 26 years old.

Diagnosed at the age of four, Botha grew up in Cape Town’s northern suburbs with his parents, Johan and Elmien, and his brothers Nic and Charl.

From early on Botha refused to dwell on his condition, insisting on being recognised for who he was inside — an artist, a leader, a friend and intellectual.

His love affair with art started at the age of three. “Leon was always drawing; if it wasn’t on paper it was on serviettes, or anything else he could find,” says Elmien.

In Grade 3, he started at the Tygerberg Art Centre, and left his formal schooling in Grade 9 to pursue his art studies full-time. Working primarily in fine art, Botha gave a dark undertone to his paintings. “That’s how he felt. He struggled with depression — he didn’t want to be stuck in his ‘Judas’ body, as he used to describe it,” says Elmien.

Professor Sandra van der Merwe, his friend and confidant, says Botha’s art expressed his “esoteric and metaphysical journey. He lived in this twilight zone, beyond his years chronologically and physically. He reached a level of maturity it usually takes a lifetime to realise.”

Botha’s passion for music — and hip hop, especially — saw him deejay at gigs in and around Cape Town under the name DJ Solarize. He went on to work with the acclaimed South African band Die Antwoord, performing as the opening act for several of their shows, and featuring in their world-renowned music video Enter the Ninja.

Artist Leon Botha, one of the world’s longest surviving Progeria sufferers, and photographer Gordon Clark embark on a collaborative and artistic adventure, exploring the questions of destiny and immortality to bring us this powerful photo series Who Am I? Transgressions.

In January 2010, his collaborative work with photographer and friend Gordon Clark, Who Am I? Transgressions was exhibited for the first time in Cape Town. This series of theatrical portraits of Botha helped him open up at a time he was suffering from depression. “This project with Gordon helped him to grow and be able to face the world in a way he always wanted,” says Elmien.

During the year he spent collaborating with Botha, Clark says, “he opened up and in that process he healed — he wasn’t in denial as to who he was. He didn’t try to disguise himself, he revealed himself.”

It was this work with Clark which facilitated one of the defining moments in Botha’s life: travelling to the Netherlands for the launch of the exhibition there.

While he had been healthy until 2010 — even after undergoing triple bypass heart surgery in 2005 — Botha suffered a stroke in November, just before his exhibition with Clark was to be shown in Berlin, Germany.

It was at this time, Elmien says, that the reality of his fragility came flooding to the fore. “I always made an effort to not brood over the time he might have left. I just enjoyed every day I had with him. He wasn’t just a son, he was an old soul who taught me so much — it was a privilege, and I’m very thankful for 26 years,” says Elmien.

Since Botha’s death, the family home has become a melting pot of visitors offering their condolences. “People from all walks of life, all ages, all cultures have come to visit” says his father, Johan.

For Clark, this is testimony to Botha’s uniqueness: “He had the capacity to be with all kinds of people — to move between them and still be totally and utterly himself.”

At the time of his death Botha was in the middle of working on a new exhibition, and writing a book.

In a text message to Susan A Zadeh, editor of Eyemazing magazine, where his work with Clark was featured, Botha said: “Life always has more mystery and beauty for you to discover and explore, in every aspect of being and becoming — the only limitation is belief in limitation.”

Leon Botha, centre, with his family at their home in Cape Town

‘Everyone’s view of Jo’burg is valid’

‘I am not worried about dying’

Your favourite multimedia this year

Bowing out and signing off