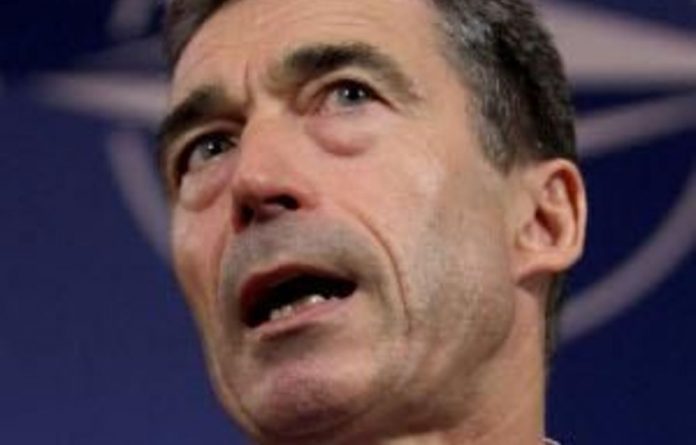 Forces loyal to Libyan strongman Muammar Gaddafi forces stormed the rebel-held Libyan city of Misrata on Wednesday, as the African Union said for the first time that “Brother Leader” would have to step down.

The attack by Gaddafi’s forces on Libya’s third-largest city of Misrata killed 10 rebel fighters and wounded 26 on Wednesday, a rebel spokesperson in the city said.

Between 2 000 and 3 000 Gaddafi troops attacked the Mediterranean port city from the south, west and east, Hassan al-Galai said.

They deployed Grad rockets as well as tanks and heavy artillery but were repulsed by the rebels who prevented them from entering the city, Galai said.

He said there had been no intervention by Nato-led aircraft and that the fighting was still raging at 6pm (4pm GMT).

Rebels scored a major victory on May 12 when they secured the airport, effectively ending a two-month siege by pushing Gaddafi’s forces beyond rocket range.

Isolation grows
Spain, meanwhile, joined the growing list of countries which recognise the rebels seeking to topple Gaddafi as the sole representative of Libya’s people, leaving the strongman more isolated than ever.

Nato allies meeting in Brussels pledged to stay in Libya “for as long as necessary” and commit the “necessary means” to the military campaign against Gaddafi’s forces.

After Nato extended the operation for another 90 days through late September, alliance defence ministers issued a joint statement pledging their determination to continue the mission “for as long as necessary”.

They also said they were “committed to providing the necessary means and maximum operational flexibility within our mandate to sustain these efforts and welcome additional contributions to our common efforts”.

With only half of the 28 Nato countries taking part in the mission, Nato Secretary General Anders Fogh Rasmussen and British Defence Secretary Liam Fox had called on member states to step up their participation.

The defence ministers renewed their demand for the Libyan strongman to leave power.

“Time is working against Gaddafi, who has clearly lost all legitimacy and therefore needs to step down,” they said.

‘No surrender
The Nato meeting came hours after Gaddafi said in an audio message broadcast by Libyan state television that he would fight to the death.

“Despite the bombings, we will never submit,” Gaddafi said in the nine-minute message, which was broadcast on his 69th birthday on Tuesday. “I am near the bombing but I am still resisting.

“We have only one choice — [to stay in] our country to the end. Death, life, victory … no matter what, we will not leave our country or sell it. We will not submit,” he said in his first public statement since he appeared on state television on May 19.

Slow but steady
The top US uniformed commander Admiral Michael Mullen conceded the Libya campaign was making “very slow progress” but stressed that Gaddafi “has to leave”.

“What I have seen is what I would call very slow progress — more and more individuals from his regime who are defecting, some of whom who are from the military,” the chairperson of the US joint chiefs of staff told a news conference on a visit to Egypt.

“It’s the US position that Gaddafi has to leave and it is a challenge for anybody to put a timetable to that.

“From a military perspective, everything I see indicates a continued drum beat to continue to raise the pressure, if you will, to force Gaddafi to depart.

“In that regard, certainly we’d like to see this end as soon as possible,” he added.

Spain speaks plainly
Spain announced it was recognising the rebel National Transitional Council as the “sole legitimate representative of the Libyan people”.

“Spain will help the Libyan people; we want a democratic country with rights and freedoms,” Spanish Foreign Minister Trinidad Jimenez said after talks with the rebel leaders in their eastern stronghold of Benghazi.

Other countries which have recognised the NTC as the sole and legitimate representative of the Libyan people include France, Italy, Britain, Jordan, Qatar, Malta and Gambia.

African support buckles
Adding to Gaddafi’s growing isolation was an African Union call this week for him to step down, the first crack in the continent’s public stance towards the Libyan strongman who has long championed its various causes.

The leader of the AU’s heads of state mediation team on Libya, Mauritania’s President Mohamed Ould Abdel Aziz, said Gaddafi’s departure had become necessary as “he can longer lead Libya”.

It was the first time a head of state on the AU panel, which has made several trips to Libya to try to negotiate a settlement to the conflict, has made such a direct public reference to the departure of the Libyan leader.

On Tuesday, Khatib was in the embattled Libyan capital where he held “positive talks” with officials of Gaddafi’s government, a spokesperson for the regime said.

Senegalese President Abdoulaye Wade was also due to head to Benghazi for talks with the rebels.

“The president of the republic will go to Benghazi [on Thursday],” his office said. — AFP