Fags, slags and flying the flags 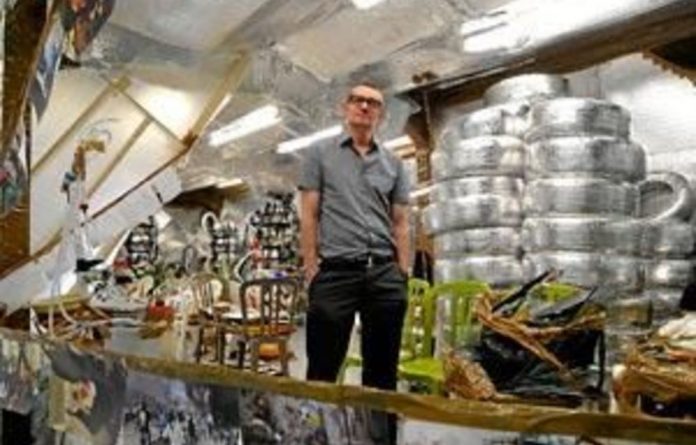 Bruised from a beating and smeared with bits of a banana with which he has been happily and very publicly sodomised, a naked man hacks at a log with an axe. He has already tried to hump the log but was probably put off by the splinters. After a bit, he wanders off.

None of this is very different to the goings-on at your local S&M club but this is the Venice Biennale. The performance, in a garden at the far end of the medieval Arsenale, is part of the work of Gelitin, the Austrian artists’ collective that once flooded a sculpture court at the Hayward Gallery in London and turned it into a boating lake.

Gelitin’s performance here is altogether more extreme. I kept thinking something dreadful might happen. Instead, we get a medley from a very passable Elvis impersonator. Austrian Aktionism was never this playful.

The centrepiece to this farago is a huge kiln, in which crucible after crucible of broken glass is being melted. The entire tableau is a model of the creative process: the tortured, dissolute and decadent artist, the futile effort, the crucible of white-hot creativity — and in the end the production of a formless pile of vitreous slag, which might or might not be art.

There are those who think this sort of thing is sick. “Art has become a hospital,” writes Vittorio Sgarbi, the commissioner of the nearby Italian pavilion, “not visited by healthy people except by chance”. Inside his pavilion there is more nonsensical slag: Sgarbi, a maverick critic and TV personality who hates most contemporary art, has invited leading Italian writers and intellectuals, Dario Fo and Giorgio Agamben among them, to select the works. Boorishly provocative, the resulting show is full of horrible, kitschy things, appallingly installed; with its clichéd sentiments and rubbishy populism, it is like a tour of Silvio Berlusconi’s brain.

A frisson of High Art
All this is a far cry from the three big Tintoretto canvases installed in the central pavilion by the 54th biennale’s commissioner, Bice Curiger. With their arcane Christian symbolism, divine light and theatrically extreme spaces, the Tintorettos are no less bonkers than any contemporary art. They used to call Tintoretto Il Furioso, and I’m sure he’d be pretty peeved to find his work here — although probably unfazed by Maurizio Cattelan’s stuffed pigeons roosting overhead.

Shuttling the canvases across Venice from the Accademia and the church of St Giorgio Maggiori to the Giardini was the perilous bit. But they don’t belong here and add nothing but a frisson of High Art, an intimation of the certainties of the past. In the climate-controlled half-light they just look big, excessive and out of place.

Excess in one way or another marks this biennale more than most. Cattelan’s pigeons are everywhere in the central pavilion. He had them here before, in 1997, but they have bred. It’s a running gag. Curiger’s keynote show, titled ILLUMInations, fills the building and about half the Arsenale.

Jack Goldstein’s paintings flare, British artist Nathaniel Mellors’s animatronic heads hold a desultory conversation and someone else has provided Plasticine for people to play with.

Curriger seems to have picked up several artists from recent shows in Britain, including Mellors, Ryan Gander and Gerard Byrne. The other big-name biennale stalwarts here are Franz West, Fischli and Weiss, Sigmar Polke and Cindy Sherman.

Curriger has also invited West and the sculptor Monika Sosnowska to produce “para-pavilions”, in which to display work by other artists. In the Arsenale West hangs art by his friends on walls decorated like those in his kitchen at home in Vienna. Sosnowska has erected a wonky, star-shaped cluster of wallpapered spaces in the central pavilion, the walls of which are hung with photographs of tract housing and townships, portraits and views by South African David Goldblatt.

British artist Haroon Mirza, who won the biennale’s prize for best artist under 40, is here too. In his work a nugget of gold bounces on a speaker as percussive music fills the room. It is kind of futile but fun.

A nervous system laid bare
One high point in Curriger’s show is the American RH Quaytman’s beautiful arrangements of quiet, shimmering and very complex photographic and painted panels. You can feel her thinking her way through the patterns, her bleached, fugitive Polaroid images of water and light. There’s the sense of a nervous system laid bare. Most art at Venice shouts or tries too hard. Quaytman draws you close.

But the best work in ILLUMInations is undoubtedly Christian Marclay’s film, The Clock, a genuinely popular and addictive work that I consider to be the most staggering, complex thing made by any artist so far this century. A meditation on time, it goes on delivering however many times one pauses to watch parts of its 24-hour cycle of interlocking film clips. It is also a real clock, always telling the right time. Marclay rightly won a Golden Lion for best artist at this year’s biennale, and Britain’s Mike Nelson should have won for longest queue. Australia had the best goody bag.

Schlingensief was still planning his work when he died and the final show is an over-the-top mixture of theatre sets and artistic works, film and documentation from his project to build a school and opera house in Burkina Faso.

The whole thing is a mock cathedral of disquiet and rage, loud with recorded voices, fragments of filmed performances and archival footage, copies of Joseph Beuys’s drawings and diagrams — as well as X-ray images of Schlingensief’s own ravaged lungs. I felt hectored. An extraordinary man though Schlingensief undoubtedly was — as much a social critic as an artist — at what point does the artist’s work end and curatorial surmise begin?

Germany seemed excessive, but Thomas Hirschhorn filled the Swiss pavilion with a wonderland of gaffer tape, cardboard and aluminium foil, bevvies of Barbie dolls and other uncountable props. It’s great, in a rackety Doctor Who set way, but one might say that Hirschhorn is doing what he always does.

I preferred the bleak humour of the Russian pavilion, curated by the philosopher Boris Guys.

A sense of dour humour
The show is called Empty Zones and inside is a banner that includes the phrase: “It’s just like anywhere else here — only the feeling is stronger and incomprehension deeper.” Yes indeedy. The pavilion focuses on the Collective Actions Group, which has been going since 1976 and is a kind of retrospective, but here the atmosphere is the thing, a sense of dour humour out of step with the excesses of the modern-day Moscow art world.

Karla Black overdid it in the rambling suite of rooms in the Scottish pavilion, in a palazzo in the city. I like her work but there was just too much crumpled and painted polythene, blocks of coloured soap, scraps of fey paper dangling mid-air from fishing line. There are great moments — corridors bordered with earth, a swag-like translucent infinity sign hanging before a window — but the whole thing sags. Black could have done with some of Quaytman’s rectitude.

With its crowds and queues, its mix of the overhyped and the underwhelming, the biennale is a three-way fight between individual endeavours, curatorial ambition and national agendas. Spain was without pleasure and Holland was a theatre without actors or a script. Greece was a bore, Cuba was a long way off, on an island in the lagoon. Finland was funny, Sweden was gloomy, Denmark made me think. The last was an international group show focusing on free speech — the suppressed, the censored and the hidden.

Given the increasing, creeping authoritarianism of most supposedly “free” countries — and the freedoms that national pavilions like to project (artistic and cultural freedom signalling an open and free society) — Denmark offered a mild rebuke.

More pointed and focused was Israeli-Dutch artist Yael Bartana’s trilogy of films, … And Europe Will Be Stunned, in the Polish pavilion. This felt right. Bartana’s idea is a call for more than three million Jews to return to Poland and her film follows the setting up of a Jewish renaissance movement in Poland.

The whole thing is both real and unreal, heartfelt and parodic. Perhaps such a movement may now become a reality. Bartana’s final film ends with the funeral of the assassinated leader of the movement — there is an implicit critique of Israeli politics and of xenophobia and nationalism ­everywhere.

Bad translation
It was difficult to forget Ai Weiwei in Venice, though his absent presence didn’t seem much more than a name on a sloganeering tote bag, or the neon sign facing the Giudecca canal and all the boat traffic passing, which read “Bye Bye Ai Weiwei”. This looks insulting, as if telling the artist to fuck off. I hope it is just a bad translation. Ciao Ai Weiwei would have been a far better call across the water.

The United States, of course, has been flexing its muscles and telling the world to screw itself for years. I heard that President Barack Obama personally approved the American pavilion’s show Gloria, by Jennifer Allora and Cuban-born Guillermo Calzadilla. Their work really depends on the Olympic athletes who run on their tank-track-powered running machine and who perform amazing gymnastics on American Airlines’ first-class seats. They leap, fling themselves about, defying both gravity and the imaginary confinement of air travel. Extraordinary rendition was never like this.

Was this all about American power and choreographed, muscle-bound might? Allora and Calzadilla pirouette on the line between politics and entertainment. The runners go nowhere and the upside-down tank looks impotent and vulnerable, though it makes a lot of noise — a roaring excess. —