Malema mouths off on mines 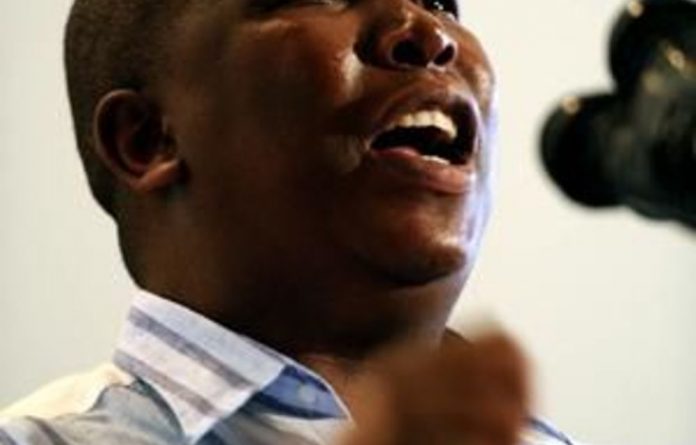 Nationalisation is a fait accompli and the ANC is merely looking for the best way to implement it, ANC Youth League president Julius Malema claimed in a documentary titled: Mining for Change: A story of South African Mining.

The documentary was funded by junior miners Nonkqubela Mazwai and Nchakha Moloi, the chief executive and chairperson of Motjoli Resources. Both also feature prominently in it, expressing views about why nationalisation is needed. They are credited as executive producers. Eric Miyeni and Navan Chetty are directors.

But, according to ANC spokesperson Jackson Mthembu, Malema is jumping the gun. "At the NGC we didn't adopt anything. We said we must look at what the pros and cons are of adopting this policy. We are still at the stage of investigating. You don't adopt a policy without scientific research," he told the Mail & Guardian this week.

Mthembu said ANC secretary general Gwede Mantashe had put together a team that would visit 13 countries to study the success of nationalisation in those countries.

In the documentary Malema argued that the mines needed to be taken by the state without compensation for the owners because they already belong to the people of South Africa. "Why should I pay for what I own? This is mine. Once I own it, I will decide what size of it I share with you. I've got the minerals, you come and bring the machines and equipment to extract the minerals. That equipment, in their nice English, they call it investment," he said in the documentary.

Malema admitted that the youth league was not taken seriously when it began its campaign to nationalise the mines. "When we started this debate, people were brushing us off. People were saying: 'These are kids, they don't know what they're talking about.' And we said: 'They don't know where the ANC comes from.' "

As he did during the election campaign, Malema referred to "they" — presumably white colonialists — who "stole everything".

"They have stolen, they've stolen our minerals, our land, they want to control everything. Now is our time to demand what they've stolen from us." He argued that the balance of forces internationally was not ­conducive to nationalisation when former president Nelson Mandela was at the helm of the country, but this had now changed.

"Now it is not just the United States, now we have China and India willing to work with us. The conditions are favourable now." The nationalisation of key industries, especially mines, will be top of the agenda at the youth league conference next week.

Other policy issues that will receive attention include the relationship between the league and the National Youth Development Agency (NYDA).

A discussion document prepared for the ANCYL conference, titled "Youth development for economic freedom in our lifetime", delivers a scathing critique of the work of the NYDA. "While there has been progress since the establishment of the agency, albeit hesitant and fragile, critical challenges still remain, chief among them the resourcing and coordination of youth development work. Structures of youth development within provinces remain in a regrettable state of limbo, with no consistent approach in form, content or location," the document says.

The National Youth Policy was supposed to be a "Freedom Charter-type document for youth", but it is not widely known by young people and society at large, according to the document.

The document also blasts the NYDA for focusing largely on the public sector as a vehicle for youth development and neglecting the private sector. It proposes that the ANCYL "reins in this organ of development in the interest of South Africa's youth".

The document places the NYDA circumspectly as the youth league in government.

"The aspirations of young people as captured through the resolutions of the youth league must find concrete expression in the programmes of the NYDA and all its components." Opposition parties and the Young Communist League complained last year, when the NYDA was established, that it was merely an outlet of power for the league.

The document proposes that the NYDA attend Cabinet meetings four times a year and has direct representation in the National Economic Development and Labour Council and on all government clusters.

Although the discussion document argues in favour of a year of national service after matric, it calls the National Youth Service (NYS) a failure. "The NYS is used as a supplementary expanded public works programme, in which government is in a frenzy to be seen to be doing something about youth unemployment, implementing programmes such as grass-cutting or school maintenance."

While these are necessary interventions, the document says, they fail to create youth who can be easily employed.