Crusaders top the NZ table thanks to Guildford 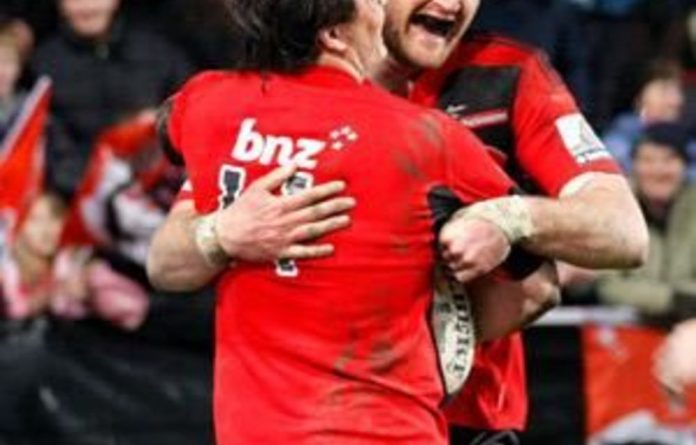 The Canterbury Crusaders seized control of the New Zealand conference when two tries by Zac Guildford cemented a 23-16 win over the Auckland Blues in their Super 15 clash on Saturday.

It was sweet revenge for the itinerant Crusaders, rendered homeless by the devastating Christchurch earthquake in February, who were beaten by the Blues 22-24 in the first round.

In their top-of-the-table rematch, which also served as a de facto All Blacks trial, the Crusaders held a decisive edge in the forwards, allowing left wing Guildford to cash in twice.

The Crusaders outscored the Blues three tries to two as their dogged defence held firm for long periods in the second half and captain Kieran Read said it showed the seven-times Super champions were peaking at the right time.

“It took an 80-minute performance and I’m really proud of the lads for getting over the line,” said Read, who was deputising for the injured Richie McCaw.

“I think our scrum has been great all year and it really stepped up and probably won us the game tonight.

“I think in that second half we really ground it out and that’s a trade mark of what you need to do at this time of the year.”

But there was nothing to celebrate for Blues skipper Keven Mealamu as his side suffered their fourth consecutive loss and slipped to second in the New Zealand conference and fourth overall.

“When you make little lapses against a team like this they’ll put points on you. We talked about it during the week and it’s disappointing to lose.”

Struggling
In the must-win match for both sides, the Crusaders were outplayed over the first 15 minutes, as they struggled to come to grips with the frantic pace in their first game after a bye.

Sonny Bill Williams conceded early points when he gifted Luke McAlister an easy penalty by not releasing the ball when the Crusaders were under pressure.

Rene Ranger then increased the lead after fullback Jared Payne created the extra man in the backline giving the left wing room to chip ahead and win the race for the ball.

But from 0-8 down the Crusaders went 10-8 ahead in the space of two minutes starting with a penalty by Dan Carter then a try to Matt Todd which started when Andy Ellis stole the ball from the back of an Auckland scrum on halfway.

Carter and McAlister exchanged further penalties and the Crusaders, denied a second try when Read was ruled to have obstructed the defence, led 13-11 at halftime.

Read made amends from the kick off in the second half when he swooped on the ball behind a Blues ruck and sent Guildford over in the corner for his first try.

Blues’ prop Charlie Faumuina, the sole non-All Black in the front rows, bullocked his way over in reply but McAlister blew the change to level the scores when his conversion attempt went wide.

As fatigue began to set in, the error level rose and both sides wasted scoring opportunities before a precision cross-kick from Carter five minutes from time saw Guildford score his second try.

In the final round-robin matches next week the Crusaders play the Wellington Hurricanes and the Blues play the Otago Highlanders. — AFP